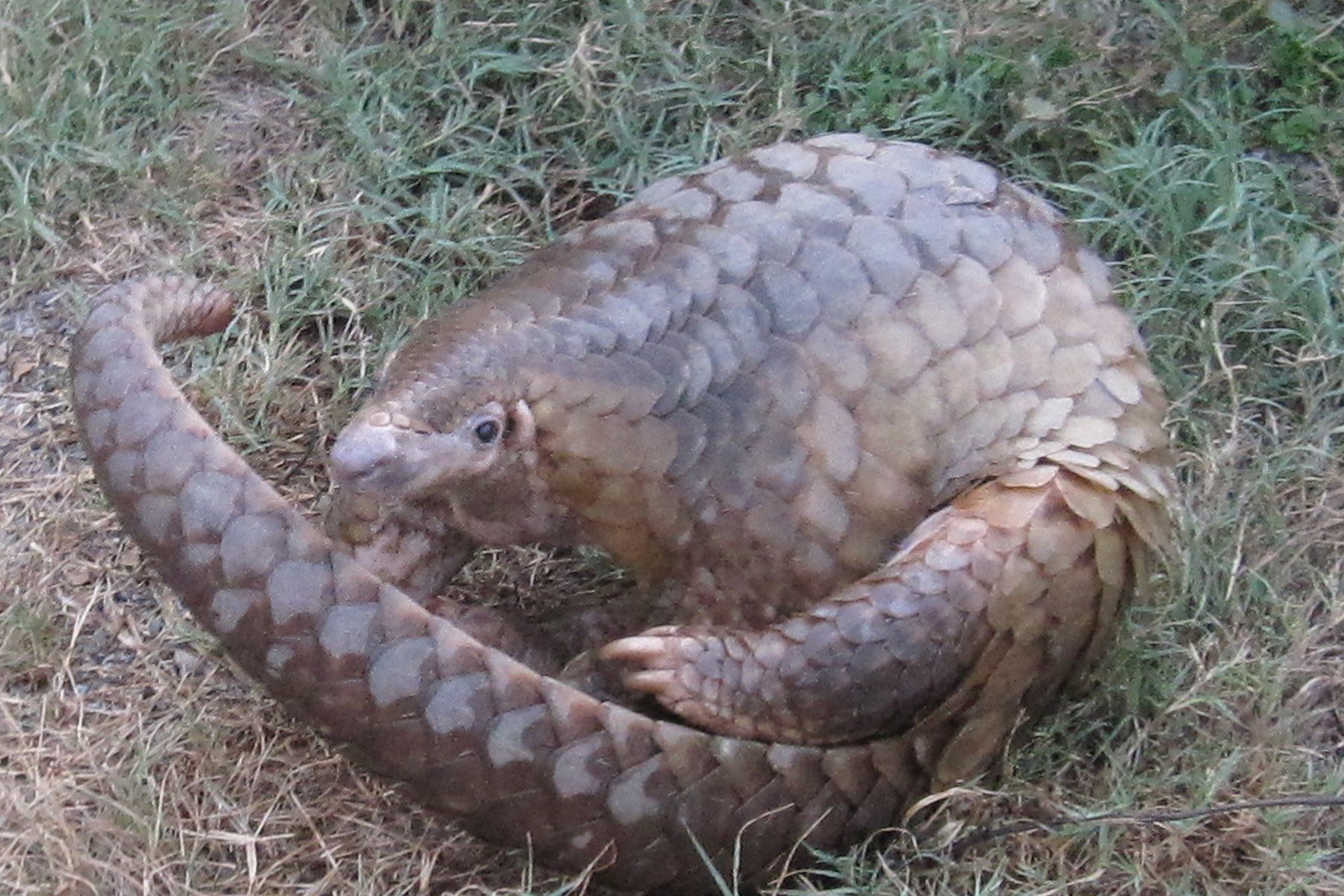 The Pangolin, a solitary and nocturnal animal native to Southeast Asia and Africa, is the most trafficked animal in the world. Their keratin scales, which are dried and ground into powder, are used in traditional medicines across South East Asia, and their meat is considered a delicacy. As they become more scarce in Asia, and following a recent crackdown on trafficking, Africa, and especially Nigeria, has become a major transit point for the illegal trade in pangolins. Nigeria is suffering from several interrelated issues, including permeable borders, illicit weapons trafficking, and fundamentalist Islamic insurgencies in its Northern regions. Nearby Ghana also faces the challenge of cross-national illegal Pangolin trade.

Much like the organised trafficking of illicit weapons, Pangolins are trafficked by transnational organised crime. The illegal wildlife trade, including this cross-border sale of pangolins, is an important source of funds for illicit weapons trafficking, and vice versa, across West Africa, necessitating a multifaceted and simultaneous approach to both issues. Potential solutions include weapons management programs in collaboration with the Nigerian and other West African security forces, strengthening of anti-poaching legislation, increasing the strength of wildlife rangers, providing means of alternative livelihoods, and educational campaigns targeting local communities. Increased surveillance is a necessity and may be achieved through the use of military assets such as Royal Navy vessels and Ranger or security force assistance battalions.

It is estimated that 1 million pangolins have been trafficked in the past ten years. This sets the species as the world’s most trafficked mammal. The WWF has categorised its population levels as vulnerable to critical, yet awareness remains low. The near depletion of Pangolin populations in Asia has seen black markets turn to new sources, notably West Africa. Cargo shipments intercepted in various West African locations, Asian ports, and  European waypoints have all been traced back to Nigeria, highlighting the country as the current hub for pangolin exports. The hunting and commercial trade of Pangolins is prohibited in Nigeria, yet the country remains has more trafficking incidents in comparison to any other African country.

Reported routes of the illegal trade include transport via land and air, but mostly via sea. Some of these routes involve direct transit to Asian countries such as Vietnam and China, whilst others include movement to Asia via European ports. The trade itself is extremely lucrative. Pangolin scales sell for more than $3,000 per kilogram and each pangolin has upward of 1,000 scales. For example, in 2019, Singapore seized one shipment containing over 12 tonnes of pangolin scales worth about $38.1 million representing approximately 20,000 individual pangolins.

It’s not just pangolins. A recent study by the University of Cambridge identified that a large proportion of intercepted shipments also contained vast quantities of ivory. This suggests a strong link between pangolin smuggling and the illegal ivory trade. Total bans on wildlife trade have been discussed internationally but are controversial, due to concerns that a complete ban may increase scarcity and further fuel  highly-priced illegal trade.

The negative implications of the trade of animal parts and bi-products are broad. Illegal transportation directly correlates with endangering species and biodiversity is also disrupted in unanticipated ways. For example, one pangolin eats up to 70 million ants and insects annually, which helps to control pests. Reducing pangolin populations may result in an increase of pests and associated diseases, with a direct impact on human and animal populations. The illegal wildlife trade also provides a mechanism for the introduction of invasive species and diseases into other regions, which could destabilise wider ecosystems and threaten environmental security. The illicit trade of wildlife also helps fuel the proliferation of black-market weapons across the continent.

Armed violence stemming from competition over land and water between nomadic herders and farming communities escalates to kidnapping, armed robbery, and murder. This increased violence has killed and displaced thousands. Additionally, a recent increase in fundamentalist Islamic activity has raised fears that the region could soon become a bridge connecting Islamic insurgencies in the Central Sahel with insurgencies around Lake Chad.

The weapons are either trafficked across the regions, made locally, bought illegally, transferred between armed groups, or seized from government stockpiles. While previously used weapons were primarily outdated and poorly maintained, more modern, and deadly weapons are increasingly available, including rocket-propelled grenades and high explosives. Many of these are funded by the illegal trade of endangered wildlife, including the three Pangolin species found in the region. Responding to these issues and limiting the funding of arms through the trafficking of endangered species is vital to restoring both security in the wider region, alleviating poverty, and reducing the illicit trade of wildlife to other global localities.

A multifaceted approach is needed to combat the cross-linked issues that have been highlighted above. First, an international effort to increase detection of illegal wildlife trafficking is required, from exports such as pangolin scales and ivory to the movement of weapons and munitions themselves. Global leaders have a responsibility to take the lead by increasing targeted aid spending for NGOs working on these issues, while also supporting their efforts with military assets.

In trafficking hubs such as Nigeria, assets such as security force assistance battalions or the British Army’s new Ranger units could be used to mentor local security forces, bolster security shortfalls and detect both weapons and animal products. Further down the chain, additional tasks could be put in place for naval vessels such as HMS Trent which is now based in Gibraltar. In a prime location at the southern tip of the Iberian Peninsula and already conducting maritime security patrols, these ships could also be used to inspect suspicious cargo entering European waters from localities with high rates of illegal trafficking.

Second, the ability to prosecute needs to be strengthened and the penalties for offences increased, with these being widely published to aid as a deterrent. Both of these above actions require an expansion of international regulations, driven by countries within Europe and North America where it is more feasible to detect and manage illegal wildlife trade and arms trafficking.

Within West Africa and Nigeria itself, investment is needed.  Strengthened and expanded anti-poaching legislation, along with investment in wildlife rangers, both in numbers and the powers they hold. Military assets could be a vital element to achieving this. Increased surveillance at borders will assist in the reduction of illegal transits, and large- scale weapons and ammunition management programmes are required to make further progress with combatting their illegal trade and reducing armed violence across the regions.

Education is vital. This should target both the local populations involved in procurement and trafficking and international buyers and traders. Reach can be maximised by combining educational programmes in situ with social media platforms to raise awareness and distribute information globally. A collaborative effort involving several actors, including NGOs, international organisations and local governments, would have the best chance of success. The British Army Education and Training Services combined with 77 brigade media ops teams could take a lead on this.

Looking to options for future support and reversal of the deep damages incurred, large scale protected reproduction programmes will revive pangolin populations. Pangolins have very slow reproduction rates due to their solitary and monoparous nature, not reaching sexual maturity until the age of two, mating only once a year, and not within a set mating period, combined with their young being very vulnerable to predators due to their initial soft white scales. Repopulation programmes would need to be long term, regulated, and well protected from potential poaching. This could provide employment and alternative livelihoods for lots of people. The scope for further research and/or charity involvement may also increase potential funding avenues for schemes such as this.

Pangolin trafficking has a direct correlation with social and environmental instability, perpetuating armed violence and providing a platform for insurgent strongholds across West Africa. Immediate action is required to combat the interrelated issues identified, with an initial focus on raising awareness and fielding further research. Critical elements of resolution involve the tightening of legislation and development of international policies, as well as the strengthening of weapons and ammunition management programmes and the provision of valuable educational campaigns. Success will depend on the support of local governments and security forces, international involvement and long-term global collaboration.

Megan Oakeley is a Captain in The Queen’s Own Yeomanry, a Light Cavalry Regiment within the Army Reserve. She has six years’ experience as a Reservist and her current role is the Squadron Training Officer in Chester. She is also a final year Veterinary student at the University of Liverpool, and her interests span both military and veterinary fields, particularly their overlap. The views expressed in this article are those of the author and do not necessarily reflect those of the British Army nor the University of Liverpool.

Andro Mathewson is a Capability Support Officer at the HALO Trust. He is interested in international security, military technologies, and conservation. Andro has previously contributed to the Bulletin of Atomic Scientists, the Center for International Maritime Security, and the Journal of Conventional Weapons Destruction. Before his current role, he received a Masters in International Relations from the University of Edinburgh, and was a research fellow at Perry World House at the University of Pennsylvania, where he also received his Bachelor of Arts in PPE and German. The views expressed in this article are those of the author and do not necessarily reflect the official position of The HALO Trust.