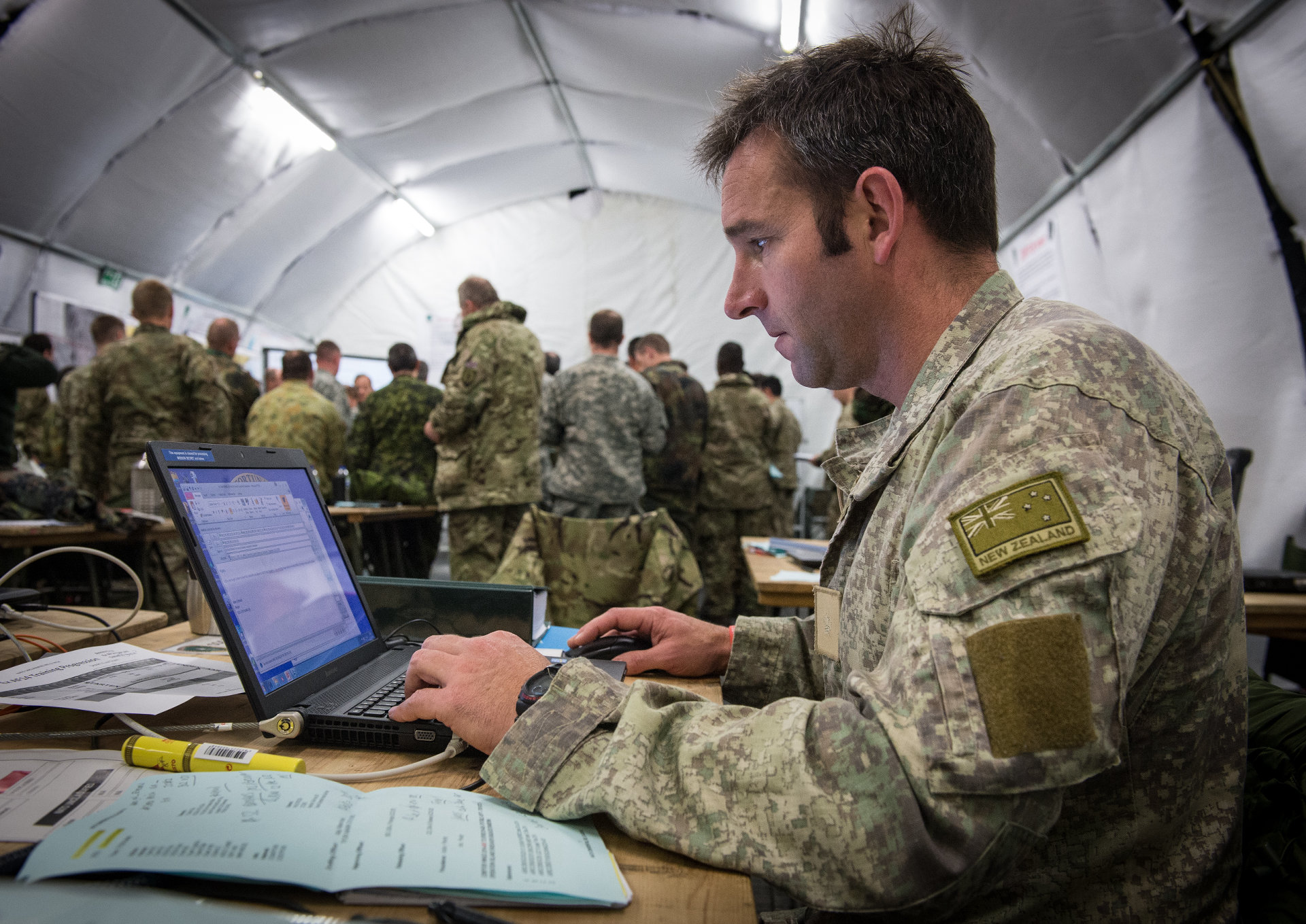 Military organizational change is as old as warfare itself.  Throughout history military forces have changed their structures to adapt to changing conditions.  They often react to an emerging external threat or an adversaries’ evolution, and those processes are necessarily constrained by resource limitations and domestic politics.1 But as Theo Farrell writes, “militaries are famously slow to change.  Indeed, military organizations, as socially conservative communities, are especially disinclined to innovate.”2  However, the character of warfare is ever-changing and the technological revolution, especially the increasing speed of information links, demands that British and Commonwealth armies restructure for these new conditions to continue execution of national policy effectively and efficiently.

The background to the creation of Headquarters Joint Forces New Zealand in 2001 evokes two parallels with the evolution of the British Armed Forces.  First, the ever-growing need for the three individual services to cooperate to achieve success on operations – joint warfare.  Second, the ways in which military changes are achieved, whether they are adopted by armed forces themselves or imposed by civilian leadership.  The United Kingdom, with worldwide military expeditions for over 200 years, was forced by circumstance to consider joint organisation much earlier than New Zealand, which since the Boer War of 1900 has mostly dispatched single-service expeditionary groupings to join larger Allied joint forces.  This longer record of joint operations probably seasoned British politicians and military officers to consider joint organisational evolution more favourably.  In contrast, New Zealand’s greater isolation and less urgent need to consider expeditionary deployments saw politicians appearing to have to force change upon the New Zealand Defence Force after 1997.  The result was that unlike the United Kingdom and Australia, the adoption of a joint operational headquarters was delayed, and had to be imposed by civilians to a much greater degree.

Military organizational change is as old as warfare itself.  Throughout history military forces have changed their structures to adapt to changing conditions.

Multiservice actions by British armed forces date back at least as far as the capture of Gibraltar in 1704.  By the 1980s, the United Kingdom routinely designated one of the single-service operational headquarters as lead for the infrequent times that large expeditions might have to be mounted.  For example, the Royal Navy headquarters of the Commander-in-Chief, Fleet, was utilized to run the Falklands campaign.3  Meanwhile, New Zealand’s forces were usually operating in single-service groupings as part of larger British Commonwealth, or later U.S. forces, of the same service.

As the 1990s wore on, the United Kingdom and Australia began to carry out more operations as part of multi-national coalitions.  This began to put a strain upon the single-service arrangements.  In 1994 it was determined that “..in recent years and increasingly in the future operations have and would be conducted on a tri-service basis.”4  Thus in 1994, Major General Christopher Wallace was tasked to set up the new Permanent Joint Headquarters (PJHQ).5  Inevitably some senior military officers opposed the change, but there is no evidence of opposition at the Ministerial or Service Chief level.

PJHQ was formally established in 1996 to plan and supervise multi-service operations.  Australian senior officers became convinced that changes were necessary after botches during Exercise Kangaroo in 1992 and 1995,6 and a new operational level Headquarters Australian Theatre was established in June 1997.  But New Zealand did not immediately follow suit.

While the British analysed developments in the early 1990s and adapted relatively swiftly, New Zealand officials waited.  It appears that in order for the New Zealand equivalent of PJHQ to be established, politicians had to force change on the New Zealand Defence Force (NZDF).  Parallels to the UK experience are harder to draw here; to their credit British ministers and senior army officers have generally cooperated when faced with changes in the character of warfare.

The creation of an NZ joint HQ occurred through a more politically contentious process.  The prime mover was a conservative National Party politician, Derek Quigley.7  His first sustained exposure to defence ‘waste and inefficiencies’ was a 1980s resource management review.8  Quigley’s good relations with senior National MPs, notably Don McKinnon, meant that they placed no obstacles to him chairing the Foreign Affairs, Defence, and Trade Committee as a senior MP in 1996.

In 1997, Quigley’s committee invited submissions on an Inquiry into Defence Beyond 2000.  The overall aim was to produce a defence policy acceptable to whatever government the 1999 elections returned.  A focus on prioritization instead of any additional resources was suggested.  Yet this prioritisation threatened the long-accepted ‘balanced force’ mantra, which successive Chiefs of Defence Force had used to restrain inter-service rivalry.  To make the most of limited resources, they advocated a joint operational-level headquarters, merging the three existing single-service ones.9

The committee’s report was ‘more than the receivers could bear’ and the Chief of Defence Force, Lieutenant General Anthony Birks, persuaded Max Bradford, the Minister of Defence, to ‘pull the Government committee members back in line.’  British contemporaries of General Birks have noted that he was hardly innovative10 and clearly the potential problems he saw embodied in the Interim Report outweighed many possible advantages. The Government’s Committee members were persuaded by Bradford to disagree with the joint HQ recommendation.11  Eventually, after the 1999 election, the joint operational headquarters got the green light from the new Government.  Helen Clark, the new Prime Minister, was in favour of creating the new HQ and she appears to have told the Minister of Defence, Mark Burton, to get on with it.  A few months later in April 2000, Air Marshal Carey Adamson, Chief of Defence Force, started an internal review of NZDF command and control12 with a view to establishing the HQ.  The new commander was to be responsible for joint training for all operational deployments and exercises; and to be of two-star rank to command at the operational level, reporting to CDF.13

Selecting the HQ’s location was perhaps one of the most emotionally charged and contentious issues.14  Among the most important criteria were proximity to HQ New Zealand Defence Force (in Wellington), and convenience to attend face-to-face meetings.  These criteria led to Upper Hutt and Wellington rising to the top of the list, to the annoyance of the Navy.  Locating the HQ in the Wellington area would sever the link between the Navy’s Maritime Commander and his ships in Auckland at the other end of the North Island.  The Navy severely resented this separation.15  The experience of the Royal Navy which had concentrated its headquarters at Northwood up until that time, over 80 kilometres from its nearest main base in Portsmouth, does not appear to have been considered.  The final choice was for Upper Hutt over Wellington because of the earthquake resilience of the government computer facility under consideration.

On 1 July 2001, Headquarters Joint Forces New Zealand (HQ JFNZ) was opened and took command over operational deployments.  The new Commander’s was officially named Commander Joint Forces New Zealand (COMJFNZ, almost always known in Kiwi circles as “COM J”).  Their first task was the ongoing deployment to East Timor.  The new headquarters was also given responsibility for all joint and multinational exercises.  The change involved significant adaptation to a joint environment.  It was feared that inter-service tensions would create ‘significant resistance,’ and ‘jeopardize the success and future’ of the HQ.16  Merging the staff branches from the previous separate headquarters was not always smooth, and there were raised voices (and worse) at times.17  But, as with the UK and Australia, a single organisation now ran expeditionary operations worldwide.

One of the most important innovations about HQ JFNZ was made possible by the small size of the NZDF.  In the UK, the three single-service forces were large enough to have full commands at ‘four star’ rank.  In contrast, one star officers led New Zealand’s three operational commands.  In the UK and Australia, the three services’ operational commands had been retained without significant change.  But in New Zealand, with a Defence Force of not more than 15,000 in 2001, the three single service staffs which directed the Navy, Army, and Air Force commands were small enough to be merged.  There were just under 400 staff in the three single service commands in 2000-2001; roughly two-thirds were relocated into the new HQ18 and the three single service commanders used the common staff to run their forces.  Small groupings, from one or more services, were almost always transferred from their single-service commander to COMJFNZ for a specific operation or exercise.  This was the usual mold for small United Nations deployments, for example, or a frigate sent to the Indian Ocean.

After 1998 the NZDF had resisted the imposition of a permanent joint commander, and had to be overruled by civilians.  But the Defence Force did, to its credit, take up the cudgel, and seems to have moved forward in the same direction as Britain and Australia in the Joint space without civilian pressure.  By 2006 discussions were under way about a lower-level joint headquarters, though it was 2011 before a Colonel level joint HQ emerged.19  Within two years after that the Chief of Defence Forces, Lieutenant General Rhys Jones, had formulated the Joint Amphibious Task Force concept.  Part of the reason for the JATF was to drive further integration of the three services.  Clearly, after a somewhat reactionary start, the Defence Force has risen to the challenge.

Dr Colin D. Robinson was awarded his PhD by Cranfield University in 2012. From 2012 to 2015 he worked in the J8 Continuous Improvement Branch of HQ Joint Forces New Zealand. He has focused on East African armies since 2017, from 2018-2020 serving as lead Military Expert to follow military developments in Somalia for the EU Mission to Somalia.