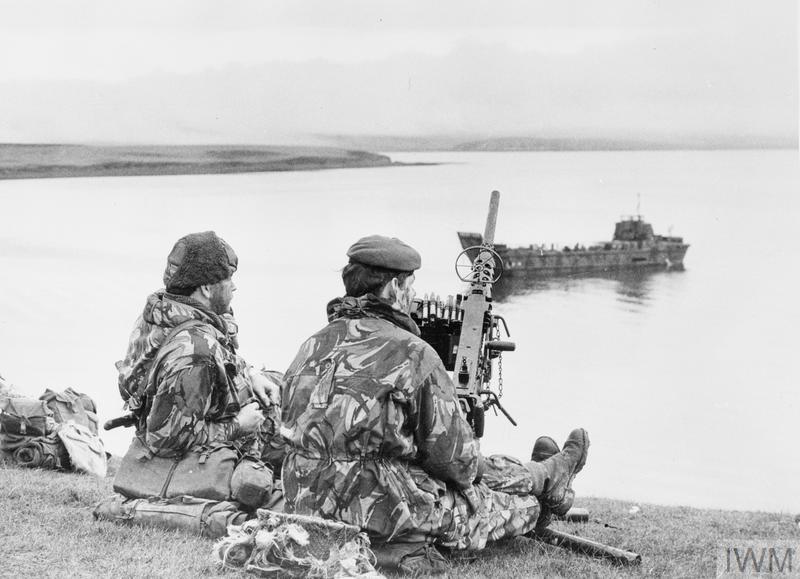 It is forty years since British forces liberated the Falkland Islands and their dependencies from Argentine occupation. What is difficult to comprehend is that today we are further from the conflict than it was to 1945. In 1982, both the Chief of Defence Staff (Admiral Lewin) and First Sea Lord were veterans of the Second World War. Today, few if any South Atlantic medals are worn by serving personnel. Far from being recent history, the Falklands War is now a generation distant, and as such is in need of dedicated study by a new cohort of practitioners, policy makers and academics. It is study worth undertaking, for the conflict encapsulates insights into the nature and character of warfare – the perennial and evolving dynamic of man.

In approaching the subject, I chose to apply a lens derived from the works of Sir Julian Stafford Corbett, Britain’s (and the world’s) foremost maritime strategist. Why? Because the conflict was maritime both in nature and character, and because despite being fought between missile-age protagonists, it was decidedly 19th century in flavour: two powers fighting a limited conflict for possession of territory. This was not a war of ideology or nation, but a territorial dispute fought at the extremes of each’s reach. For this, I set myself 2 questions. First, what would Corbett have made of the Falklands conflict? Secondly, what insights would he extrapolate from it for today’s strategists and military practitioners?

Many of these insights are not new. As a recent RUSI paper has stated, the ability to project power through expeditionary capability has been a sine qua non for British defence and security for some 300 years.1The key insights identified by strategists and practitioners, from Molyneux to Corbett and Wolfe to Thompson, are recurring: Mass; Isolation of the objective; logistical preparedness; specialist commanders, units and equipment; strategic coherence and direction; all of these have been identified from the very first treatises on maritime, amphibious campaigns to the most recent. Whilst the technology may have changed and evolved, these issues are perennial and can inform us more about the challenges faced tomorrow than our own limited experience. No British serviceperson has had to undertake opposed theatre entry against a peer competitor in a generation, and unlike 40 years ago, few have experienced comparable conflicts; as Carleton-Smith intimated, today we are in a ‘pre-war generation’. History must be our guide, or else risk wasting blood and treasure re-learning the hard way.2 As Bismarck so sagely quipped: ‘Only a fool learns from his own experience; a wise man, learns from the experience of others.’

As a non-practitioner, this was the example Corbett epitomised; he understood the power of history as a guiding light. His works utilised exhaustive surveys of British maritime experience to establish strategic truths; truths that shape our understanding to this day. Bringing his legal training to bear, he also understood not only that one must read widely, deeply and contextually as the late Professor Sir Michael Howard commanded4; he weighed all the evidence before determining his conclusions, and melded historical insight to contemporary theory.5 It is an example that many attempt to emulate and few achieve, but which sets the tone for these articles.

Context and Reality – Setting the scene

Corbett, as with all his works, would have set out the context of the study. Remember, he was not writing for historical purists, but for statesmen, practitioners, and to inform public debate. That would have meant him placing the Falklands in the right historical setting, which of course, was the height of the Cold War, and the ever-present possibility of a continental conflagration and nuclear Armageddon, however far-fetched that may seem to modern commentators. With that context, came an acceptance that Britain would not, and could not, act outside of Europe unilaterally.  The long retreat from Empire, and latterly from the Commonwealth, was not just a matter of balancing the books – especially given the sluggishness of the British economy and the emergence of the ‘English disease’6– but of redefining Britain’s place in the world. That place was as a vital US ally within Europe, securing the former’s commitments there, and as a sponsored auxiliary in policing extra-European security and stability to contain the Soviet threat.  It was a position of necessity rather than choice: Britain simply could not afford to be both a global policeman and a meaningful contributor to European defence. Further, the 1956 Suez fiasco had proven that Britain could not act alone on the world stage with the type of urgency crisis response necessitated. Withdrawal from East of Suez in 1968 and acceptance of its auxiliary status confirmed this diminishment of both the British state and the Royal Navy.

This combination – limited financial and resource availability and continental NATO commitment – came to a head in the 1981 Command Paper 8288 (Cmnd 8288), the infamous Nott Review. In the context of the Cold War, the Paper viewed extra-European operations as of little consequence: ‘The Central Region is the Alliance’s heartland in Europe; the forward defence of the Federal Republic is the forward defence of Britain itself’.  The RN’s role in any such conflict was clear: less sea control, more sea denial; ‘a naval strategy that was constructed around the NATO alliance and the defence of Western Europe’.  For the first time in almost 200 years, the vital ground was neither in the littoral or colonial theatres: rather, it was in Central Europe.  Moreover, the RN’s role in maintaining the current position was one of protection: it was a defensive posture, designed to ensure resupply to the European theatre and the continuation of seaborne trade.  This shift in purpose meant that its structures and culture were similarly under attack through a change in nuclear policy. In gaining Polaris, the Royal Navy was obliged to spend vast sums on developing suitable platforms and capabilities to ensure and assure continuous at sea deterrence. Anti-submarine warfare (ASW) in defence of both Polaris and the (misnamed) Sea Lanes Of Communication to Western Europe, not out-of-area expeditionary and constabulary roles, became the surface fleet’s raison d’etre.7

The restructuring of the fleet was to be extensive. The carrier fleet, the yardstick of major warfighting credibility and extra-European intervention capability, had been first cut in the 1966 Review and then relegated to ASW support in subsequent Command Papers and Estimates. Only 2 of the new Invincible-class carriers were to be retained in service; Invincible having been sold (subject to contract) to the Royal Australian Navy. In home waters, the likely epicentre of any conflict, land-based aircraft could provide all that the fleet might require: Nimrod Maritime Patrol Aircraft for ASW and airborne early warning; and Buccaneers with the (yet-to-be-ordered) Sea Eagle anti-ship missile. 17 SSNs and an unspecified number of SSKs would provide the fleet’s offensive arm against the Soviet Navy as it tried to break out into the North Atlantic. It was assumed that in extra-European crises, the USN would provide. Escorts were to be capped at 50 (a reduction of 9), and the amphibious ships Intrepid and Fearless disposed of alongside 4 of the operational RFAs. Despite statements to the contrary, the retention of 3 Royal Marines battalions was not a given; without the amphibious shipping, what role was there for 3Cdo Bde?

Despite its “valuable role” in out-of-area operations, it was clear that by 1984 Britain would have effectively ceded any kind of extra-European theatre entry capability. The great irony was that, of the three surface flotilla commanders, the only one with a NATO role was Flag Officer 3rd Flotilla (Fleet Aviation and Amphibious Warfare Authority): Commander Anti-Submarine Group Two under Commander Striking Fleet Atlantic. Nevertheless, it could be argued that 1981 was Corbettian, but just not in a manner that we are comfortable with. The three functions of the fleet are clearly defined – trade protection, diplomatic effect, and the support of military operations ashore. It is just that the battle has localised deep into the North Atlantic, rather than the global littoral.

All of this had a significant impact on the decision making in Buenos Aires. Whilst the Foreign Office raised repeated warnings as to the viability of defending the Falklands, the archipelago was proving an embarrassment to HMG’s efforts to break into South American markets. Efforts had been made to discuss sharing their sovereignty with Argentina in the preceding decades. With the explicit deletion of the amphibious fleet and the Antarctic Patrol vessel, HMS Endurance, Buenos Aires decided that the time was ripe to act, and an operation was planned for September 1982.8 It was assessed that Britain had neither the will, nor the capability, to re-take the islands if presented with a coup de main.

There were two other strands to this problem. The first was the United States, which was both historically and currently antagonistic to British presence in the South Atlantic and pro-Argentine in outlook. How would she react to hostilities between two of her allies? Buenos Aires considered it unlikely that she would come down on the side of Britain, given her reaction to Anglo-French connivance in 1956 and the USA’s own interests in containing Soviet influence in South America. The second was the Soviet Union, reliant on Argentine grain exports to feed their population, and again, with a vested interest in seeing Britain further humbled. All in all, it could be expected that, if presented with a fait accompli and given the Foreign Office’s earlier offer of joint sovereignty, Britain would be unlikely or unable to respond in a timely or meaningful manner.

Andy is Former Corps Tutor, author of "Amphibious Genesis: Thomas More Molyneux and the birth of Amphibious Doctrine", and numerous articles for RUSI and the Naval Review.

Andy also hosts the RUSI A Call To Arms series.