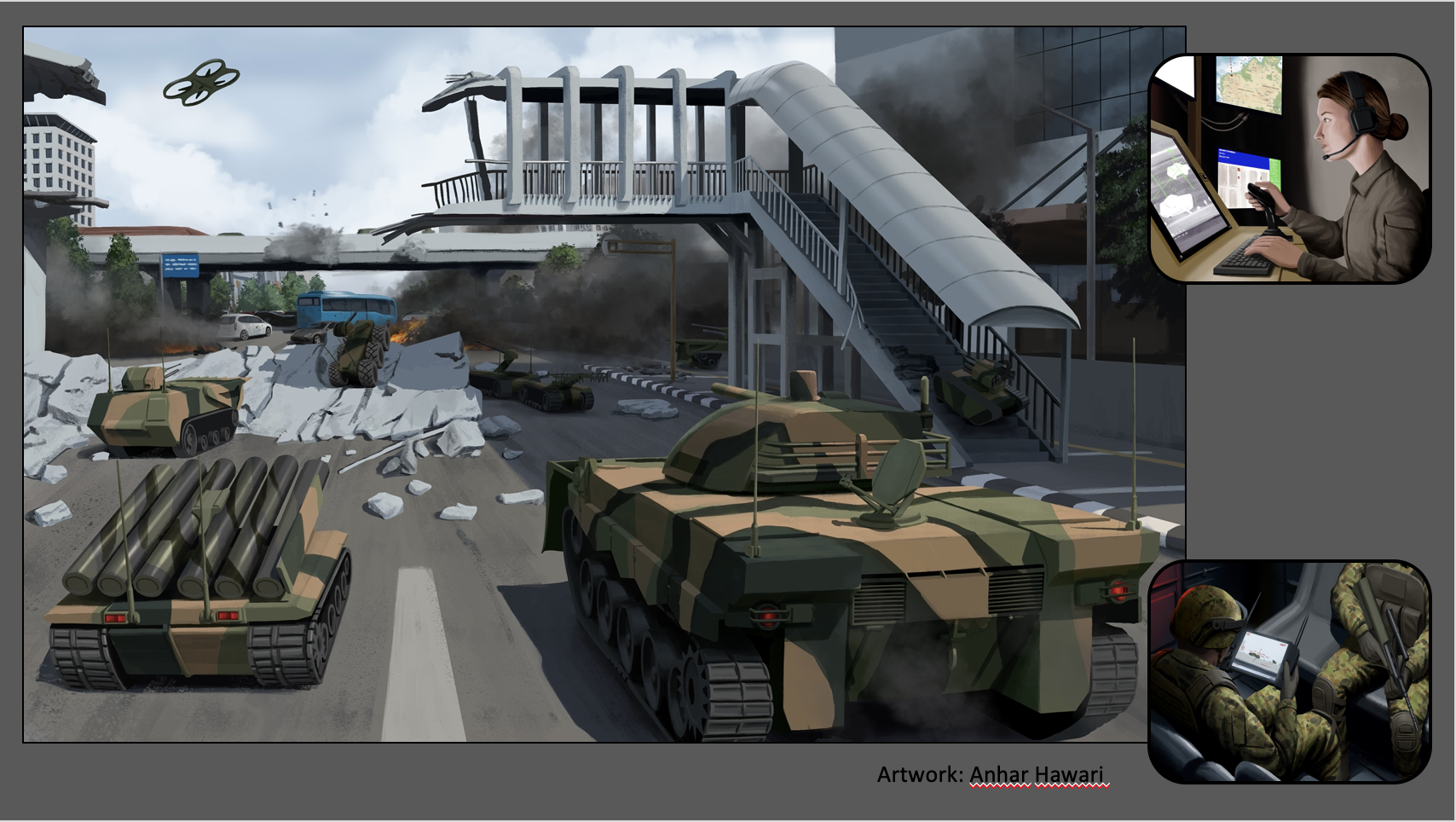 The Australian tactical concept of clearing the Echthros Marines from the airbase and the town by attacking through the urban area from the West – the vegetated inland direction – offers many advantages once the town is reached, including reducing the combat power of the defender’s mechanised capability, precision firepower and sensor systems. Yet success will depend upon rapidly reaching and assaulting through the urban area proper before the defenders have time to redeploy, reinforce and prepare new positions there.

Conversely, to impose maximum delay, the Echthros have deployed the security perimeter that protects against surprise well forwards – and the battalion that covers the inland approach is therefore thinly spread. Contemporary precision artillery and drones give these defenders great striking power, but if their positions are located the same technology allows the attackers to rapidly eliminate them. Defensive fortifications will increase protection but are very difficult to hide. Echthros urban doctrine is adapted to the reality of precision munitions and places great emphasis on concealment of positions.

There are three proper roads leading into the town from the West, and the Echthros Marine company deployed covering this approach has deployed platoon astride each. There is a section of ten in a forward observation post right next to each road, with the balance of their platoon deployed in defensive positions a hundred metres or more to their rear. These are well-hidden inside buildings and sited in defilade to look ‘sideways’ down lateral roads tracks and across open spaces so that they can engage attackers from the flank. Each platoons ‘observation lanes’ link up with those of their flanking neighbours north and south and so provide continuous observation along a perimeter.

To thicken up the defence, the Marines armoured vehicles and support weapons have also been concealed within buildings, with their sensors and firepower reinforcing the defensive framework, but the large size of the amphibious vehicles dictates that many must be concealed inside larger buildings further to the rear. Still following doctrine, and like every other each marine company in the perimeter force, there is a reserve section with the company headquarters another hundred metres further back.

For the Australians, the crux is to reach and ‘break into’ the town swiftly, avoiding a protracted attritional battle on the approaches and outskirts – and the key to this is to rapidly find or make gaps.

As the attack force poises, it has seismic, audio and image sensors emplaced, with perched UAS observing the streets and tracks that offer routes in or out of the town, but they are all silent, reporting nothing. High altitude sensors have only revealed enemy minor movement in and around perimeter posts on the edge of the town and airfield. There is still no response to the beach landing. The indications are that this is a competent enemy observing good defensive discipline. The Echthros will have to be located and drawn out by fighting.

The first part of the plan is simple and ancient – it would be equally recognisable to Sun Tzu, Napoleon, Shaka Zulu or Erwin Rommel. Send skirmishing forces forwards on a broad front in enough strength that they are too dangerous to ignore but too dispersed to merit a counter blow. Push forward and force the defenders to fight and reveal themselves. However, RAS has changed the skirmishing calculus. Traditionally skirmishers focused on finding weakly defended points for following forces. Their descendants still seek weakness, but unlike their ancestors who could only expect to harass strong defensive positions, when they find them, they have the means to destroy them.

The destruction of the beach bunker, timed to occur immediately after its occupants reported the beach assault, is also, by design, the moment the break-in battle is launched. Electronic brains all along the forest edge that faces the Western perimeter of the town awaken mechanical bodies. Two of the armoured MAVOC fitted with CUAS move slowly to overwatch positions on higher ground, but all the other platforms of this high-value class remain hidden. This is the moment for the smaller, cheaper UGV, crashing out of their positions in the scrub and bushes, to move briskly across open areas and down tracks and roads towards the town, following the autonomous Reccedrone7’s.

Most of the UGV skirmishers are the simple, tough and low-cost Xtrack800s, armed with an elevating arrangement of 81mm and 40 mm tubes plus a 10mm ‘blowback mechanism’ carbine on their decks. Some of these vehicles have, like the Xtraks on the beach, foam inflated structures that appear to visual and thermal sensors to be a small AFV. A couple carry a folding alloy bridge that can be deployed to cross obstacles such as streams and storm drains or scale vertical steps. The other vehicles are the ride on mower sized Polywheeler350 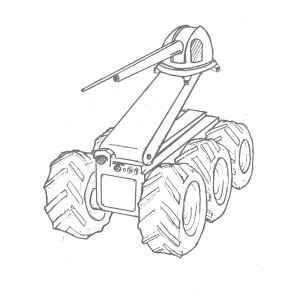 vehicle with their six huge skid steer wheels and a sophisticated RWS on an elevating arm. Both types of UGV have grenade discharger tubes and storage bins for dispensing munitions, small drones or other devices.

A crucial capability option for the UGV is satellite linkage. This allows platforms to drop a small self-aligning satellite dish that remains connected physically connected to the vehicle. The link is provided by three laddered fibre-optic cables that are embedded in a tough but very thin plastic strip which unrolls from the vehicle – having three cables improves redundancy against breakage. While eventually the clips are expected to be sheared by enemy action or another vehicle driving over it, the strip to dish to satellite linkage dramatically reduces the need for mesh radio transmissions in the early stages of an operation.

The doctrine for uncrewed ‘advance to contact’ is a modernised form of that developed by the Soviets. Pick pairs of parallel concealed and covered routes. Down each route send air reconnaissance – two Reccedrone7 multi-copter UAV’s that bound alternately from one concealed position to another concealed position, scanning briefly while in flight. Behind the flying scouts dispatch a lighter vehicle – an Xtrak, covered by more potently armed one – a Polywheeler 75 m behind it and two more lighter Xtracks a little further to the rear. Lead with the force on the route that is less likely to be defended and when contact occurs on one route, immediately try to envelop from the second. Follow behind with more platforms ready to replace casualties or push through and have flying firepower – Gundrone12 armed drones sitting on the ground a couple of hundred metres to the rear able to respond within seconds.