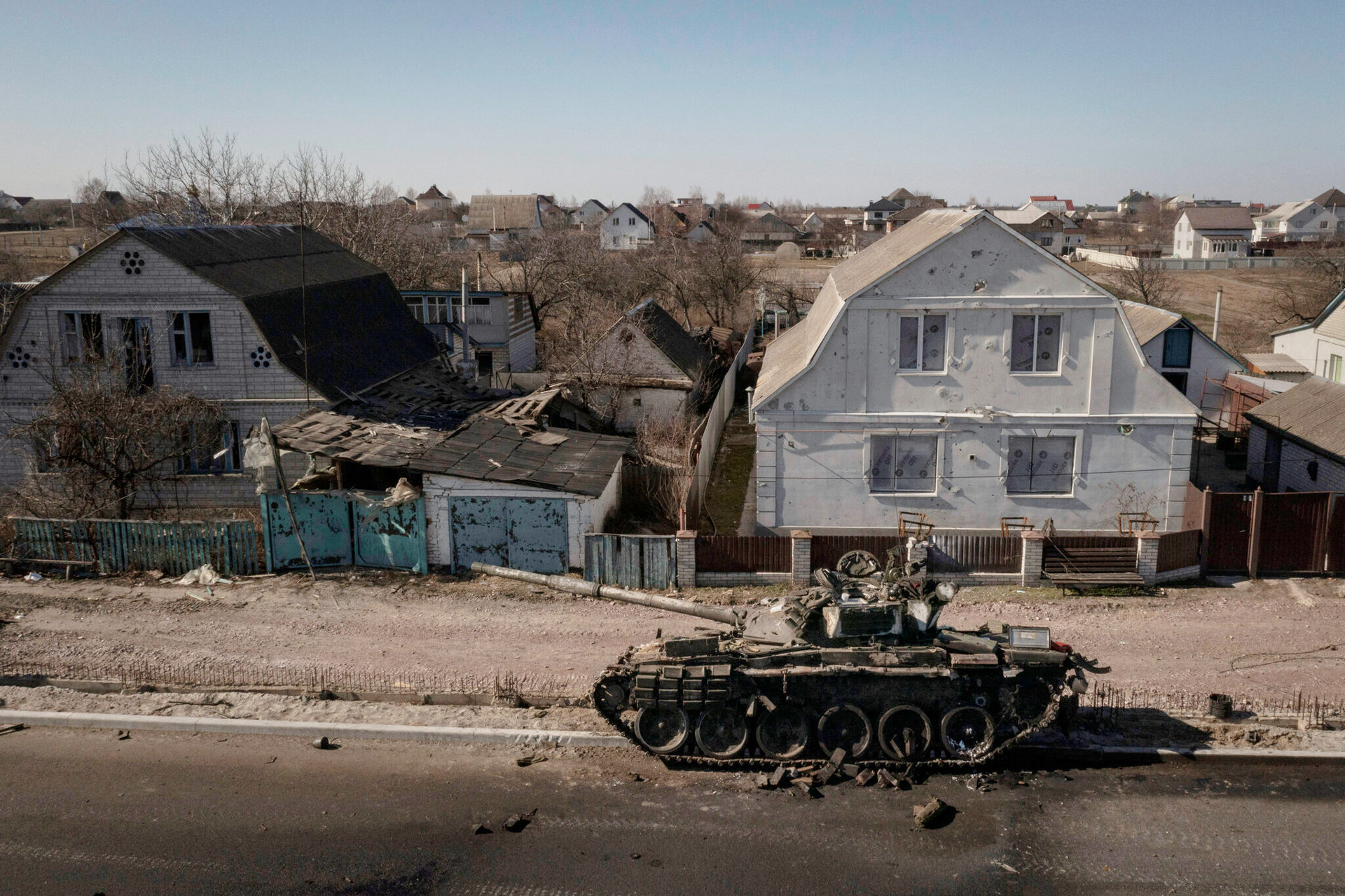 High Russian tank losses in the war in Ukraine have attracted debate. Some opinion views the losses as further evidence tanks have become obsolete on modern battlefields, a view challenged by counter-arguments.This article seeks to offer perspective on Soviet-Russian tanks and it examines possible factors accounting for the high losses.

The design philosophy of Russian tanks

Post-war Russian tank design was innovative.The Soviet Union produced the first tank with a rounded turret (the T-54/55) and the first with a 115mm calibre gun (the T-62). In addition, the USSR spearheaded research into Explosive Reactive Armour (ERA) and gun launched missiles.

But the key change was the transition to three-man tanks. This was made possible by the incorporation of a conveyor carousel autoloader.  At a stroke, Russian tanks could be lower, lighter and faster than Western counterparts. In effect, Russian design went down the route of medium tanks (a ‘clean’ T-72 is almost 20 tons lighter than a Challenger 2); with a powerful gun (uprating to 125mm calibre); and with basic stadiametric day sights and cheap infrared night sights (Western technology was migrating to the more expensive but qualitatively superior thermal imaging).  Laser range finders were added later. Thousands of these tanks could be produced and indeed more than 20,000 deployed on the Central Front at the height of the Cold War.

The first tank to use a carousel autoloader was the T-64. The carousel was a rotary device loaded with propellant charges, placed under the floor of the fighting compartment. The autoloader had important consequences. It constrained the size of the breech assembly and therefore the length of shot rounds (kinetic rounds, long rod penetrators, or technically ‘high velocity armour piercing fin discarding sabot’). The more important consequence, however, was that the crew were now sitting on a bomb- an unaddressed design flaw which, several decades later, has proven devastating for Russian tank survivability in Ukraine.

The combustible charge bags were necessarily non-compartmentalised (or a conveyor carousel would not function). A tank like Challenger 2 has compartmentalised ammunition (stowage bins). For a British reader, the relatively recent range accident in which four charge bags were taken out of the bins and placed on the floor by the loader’s feet is an illustration of what happens if a charge bag is accidentally set alight. It suffices to end this section with a quote from the previously cited 1984 CIA study of Soviet tanks: ‘Clearly, however, if the Soviets do in fact choose to continue to focus on the development of main battle tanks, they must protect their tanks better.’ The story of the significant tank losses in Ukraine has been the failure to do just that.

Soviet tank production – a legacy of WW2 (‘the Great Patriotic War’) – was undertaken at vast plants in Kharkov, Nizhny Tagil, Omsk and Chelyabinsk. As many as 3,000 tanks were churned out annually. Due to sanctions and other factors, tank production has collapsed (it is believed two company batches of T-90M have been delivered since February, but these would have been vehicles in assembly with available parts). The operational tank fleet consists of various modifications of the three main types: T-72, T-80 and T-90.  At the end of 2021, there were in the order of 2.600 operational tanks, with another 400-odd mainly T-72 variants used as range tanks.

Fig 1 – Operational tanks in Russian Army estimate Source: Voennoye Obozreniye –‘Military Review’.  Note the table does not show T-90M; as many as 26-27 may have been delivered before the invasion; another two company batches have been delivered since 24 February.

The three ‘modern’ tank types are the T-72B3/B3M, T-80-BVM, and T-90A/M, or only around one quarter of the fleet. They are modern because they are fitted with an advanced gunner’s sight (the Sosna-U) with night capability, and boast modern fire control systems (FCSs). The commander’s station sight in the ‘modern’ tanks remains an inferior sight, but the commander shares a flat screen display with the gunner. The older variant tanks are fitted with Soviet-era sights and fire control systems that are no match for Western tanks. As such, Russia invaded Ukraine with a tank force that was outdated and ageing; a tank force which had failed to address key vulnerabilities and to equip their tanks with an array of battle-winning capabilities. The result- a seismic shock dealt to Russia’s armoured capability.

The 18 August UK MOD daily intelligence brief on the war in Ukraine stated:

‘The heavy attrition of Russian Main Battle Tanks in Ukraine is highly likely partially due to Russia’s failure to fit and properly employ adequate Explosive Reactive Armour (ERA)…It is highly likely that many Russian tank crews lack the training to maintain ERA, leading to either poor fitting of the explosive elements, or it being left off entirely. These deficiencies probably contribute to the widespread incidents of  turret ejection, which are well documented in eye-witness videos from Ukraine…The war has seen numerous failures by Russian commanders to enforce low-level battle  discipline – such as the use of ERA. The cumulative effect of these failures is likely a  significant factor behind the poor performance of Russia’s forces.’

Examination of hundreds of images of damaged and destroyed Russian tanks suggests this assessment is mistaken. Russian tanks in Ukraine are protected by ERAs according to type. Images can be found where ERA is apparently missing.  However, this is because it has been stripped by Ukrainians for recycling (or was dislodged by the impact of a munition). Images can also be found where crews have added even more, jerry-built armour (the much-commented cages over the turrets aside). These have failed to protect adequately. YouTube videos show Russian tanks with ERA correctly fitted have proved vulnerable to anti-tanks systems (the indigenous Stugna, NLAW, and Javelin); other tank fire; and artillery fire. The latter has been especially noteworthy with splinters from 152mm/155mm calibre shells quite capable of provoking catastrophic kills. The question is why – what accounts for this vulnerability?

It is important to understand ERAs are not intended to fully defeat threats (although in some cases they may). They degrade threats. This means some penetration may occur. In the case of Russian-designed tanks that penetration can be catastrophic.  The table below makes the point. It shows tank and ERA types; the numbers destroyed or damaged; and the numbers that resulted in a catastrophic kill or ‘pop top’ (the turret flying off).

Fig 7 – Source: the Oryx database as at 20 August (note an additional 214 tanks could not be identified so the true numbers will be higher; Oryx also only accounts a loss if visual evidence is available).

The explanation for the vulnerability of Russian tanks must lie elsewhere and not be a consequence of poor ERA management. The chief reason is the conveyor autoloader, earlier described in this article as ‘a bomb’.  Any penetration of a Russian tank (HEAT, long rod penetrator or shell splinter) is potentially catastrophic. Ignition of an unprotected charge bag sets off the entire carousel.  The energy release is sufficient to fling turrets weighing over ten tons.

Russian tank losses in Ukraine cannot be attributed to design flaws and vulnerabilities alone. Made clear through the steady stream of handheld and drone footage has been the poor application of drills and tactics, alongside a widespread loss of morale amongst the Russian Army. These additional failings have further exacerbated tank losses. Inept leadership and tactics evidenced in visual evidence have included:

In addition, poor morale and an unwillingness to fight, have led to crews outright refusing to fight, as well as sabotaging or abandoning their tanks. One example of poor morale is cited below.  The speaker is a Ukrainian paratrooper officer.

‘They had enough strength to fight, they probably didn’t want to die…We knocked out the first three tanks – the rest of the crews jumped out and waved white flags. That is,  they prepared to be captured, because they had a white flag with them.’

According to the Oryx database, of the 970 estimated Russian tank losses (at time of writing), 338 are captured or abandoned tanks. One would have to trawl examples of demoralised armies or fronts in WW2 to find comparable data.

An inescapable judgement is that Russian tanks are dangerous to crews. This has been known for decades though numerous Middle Eastern wars and has now been confirmed again in the war in Ukraine on a large scale. Whether Uralvagonzavod and associated design bureaus finally accept this reality and embark on a new philosophy of Russian tank design, at the moment, seems doubtful.  The costs would be huge. The transition would be lengthy and painful.  But until this step is taken, Russian tank crews will continue to face a high risk of death by incineration in vulnerable tanks. Poor drills and tactics, unless addressed, will only continue to exacerbate these vulnerabilities.

Are the days of the tank numbered?  We should be cautious using the war in Ukraine to make this argument.    At the time of writing, the war is stalemated.  More than one Russian commentator has compared the situation nervously to the First World War (Russians, of course, remember this as prelude to the October 1917 revolution and collapse of the country).  How can this infantry and artillery deadlock be broken?  Perhaps with a machine called a tank.