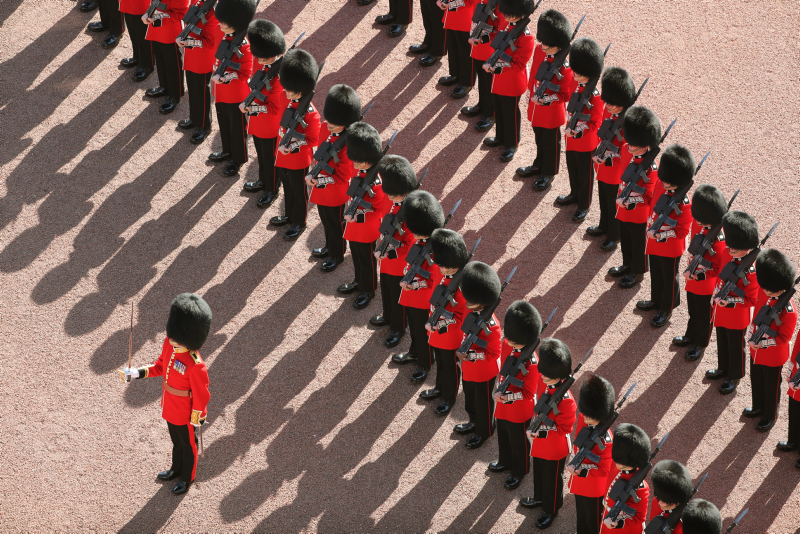 In two recent articles a Wavell Room contributor discussed at length their thoughts on the current state of leadership in the Army and put forward several proposals that might improve it. The first piece received a considerable amount of attention; clearly the contributor aimed to start a conversation about these issues­ and has achieved that goal. In the spirit of discussion, this article intentionally aims to establish alternative points of view. It will cover several topics: first, the problems, causes, and solutions articulated in the previous article; second, touching on the implementation of military discipline; third, reporting and promotion, and the inherent problems therein; and finally, the issues of retention and how management of the promotion and rank structure might be organised to further the goal of maintaining a healthy military population.

Leading By Example – NCOs re the Vital Ground, identifies one key problem: that a small proportion of Junior Non-Commissoned Officers (JNCOs) and Senior Non-Commissioned Officers (SNCOs) disregard the Army’s Values and Standards, behave inappropriately, and still succeed at promotion boards; and that this toxic attitude spreads downward into the junior ranks who see it as evidence that poor behaviour is no impediment to promotion.

The author establishes two causes for this: first, that the chain of command has promoted some individuals ‘at risk’ to meet operational Order of Battle (ORBATs); and second, that top third NCOs leave the Army, allowing others to promote ahead of or beyond their ability level. The author also addresses other external factors, such as officers serving as poor role models, but dismisses them, while simultaneously presenting a caveat that officers are overloaded with frantic workloads – a factor equally applicable to many SNCOs.

Having identified the causes of the problem, they go on to present unrelated solutions; mentorship outside of the chain of command, and a restatement of the Values and Standards. Mentorship of JNCOs is already a SNCO responsibility, and is one of the essential categories for grading Soldiers’ Joint Appraisal Report (SJARs). Indeed, this was recently further formalised by having sergeants write the reports – and Mid-Period Appraisal Reports (MPARs) – of lance corporals. Allowing JNCOs to pick their own mentors from across the regiment would likely lead to frustration as savvy junior soldiers compete to gain the ear of the most influential seniors, or use it to build their profile rather than for their own self-development. Additionally, it could lead to the development of cliques outside the established unit structure, potentially undermining the chain of command.

The second solution of reinforcing the Values and Standards is one that I think instinctively appeals to the audience for this essay. The problem, however, with advocating it as a panacea is twofold: first, that this is already a structure the Army is supposed to adhere to, which means that presenting it as a solution without modification is no change from the current situation; and second, that it does not address problems with how the Values and Standards are currently enforced. That said, there is a related case to be made here.

The implicit problem of promoting those who fail to meet the Values and Standards is that the promotion system is easily gamed by those who, as in the example of the rude Warrant Officer, are happy to represent them to their seniors and reporting officers, but will abandon them when that audience is not around. Further exacerbating this issue is the concept of ‘the standard you walk by is the standard you accept’ when combined with the prevailing desire to create a friendly working atmosphere and a general reluctance, as in the example in the original article, to push for formal minor disciplinary action at any level higher than LCpl.

This highlights an issue with the implementation of discipline through administrative action; namely that people in positions of authority and responsibility prefer to use informal means to address personal and professional failures rather than the established formal system. If there is a general shift away from the ‘proper’ system of discipline at all levels, it suggests that the system is no longer fit for purpose. As referenced in the second article, Leading by Example – The Officers’ Mess, repeated minor infractions in civilian life can lead to much more tangible repercussions, the most significant of which is becoming unemployed. Currently, the only clear-cut case for automatic dismissal from the Army is confirmed drug use, and even that is losing its clarity. Assuming it will not become easier to ‘fire’ people, significant action is needed to motivate those that are, as the second piece suggests, content to coast along while doing the minimum.

On the flip side, the best forms of motivation are positive, not disciplinary, and currently the only real formal positive reinforcement available to commanders is the writing of a good report. Commendations, whilst satisfying, are often primarily appreciated as additions to reports. Here, the military could learn from civilian incentive programmes, which are usually some form of bonus. Aside from monetary bonuses which may be both financially implausible and unpalatable for cohesion, two options may be more suitable: first, granting commanders at all levels a discretionary budget for the purchase of small rewards (vouchers, event tickets etc); and second, the devolution of powers to grant additional leave days to the lowest possible level. Giving leaders and managers the discretion to use such positive motivational tools would reward positive behaviour outside of annual reports, and would be especially effective in cases where somebody adds significant value to the Army in their current rank but is unlikely to be promoted again.

In a similar vein, the second and more important issue highlighted by the promotion of ‘suspect’ individuals is the failing of the reporting and promotion system itself. As mentioned above, the current process by which somebody can hope to win promotion is entirely reliant on them looking good in the eyes of, firstly, their reporting officers and, secondly, the members of their unit grading boards. An individual like the rude Warrant Officer described in the first Leading By Example article can afford to behave badly or do poor work if their immediate chain of command and their peers remain unaware of it. The insistence on ‘impartial’ grading boards also means that many decent candidates are failed by the luck of the draw when it comes to 1st Reporting Officers (1ROs) as, regardless of the Chain of Command’s (CoC’s) input on a reporting officer’s writing ability, by the time most of the feedback comes the report has already been graded.

A couple of ways to redress this spring to mind, though no doubt there are others: for one, the focus (in terms of word count) could be switched from performance to potential in order to allow for a proper analysis of how suited an individual would be to the next rank up; another, the sub-unit grading board could be conducted prior to the initial writing of the report. Reports could also be refocused on a subject’s performance in work; attendance or participation in extra-curricular activities say nothing about their suitability for promotion. A last, and more radical, suggestion also deserves consideration: allowing units or Brigades an allocation of promotions, perhaps based upon the number of eligible candidates in the unit divided by the number of jobs that need filling.

Unfortunately, in the current system there is little that can be done about the individual that ‘looks up’ and disregards down, outside of the commitment that reporting officers have to exploring those individuals’ working relationships with their subordinates. The upcoming trials of 360º reporting may go a considerable way toward rectifying this. Nevertheless, exploration of alternatives to the current format of the reporting system may allow for fewer promotions ‘at risk’, and instead give commanders and subordinates more confidence in promotions going to the most suitable candidates.

Such an outcome would also address the second cause identified in the article: that of top-third personnel leaving the Army. Often those that can leave and find successful jobs are those that would flourish if they were operating in the right environment within the military, something illustrated by the example presented in another Wavell Room article, The Value of the Specialist. While the creation of that environment – the one that encourages, supports, and rewards effective and positive working practices – is too great a subject for this article to address, it is certainly another matter that the Army should be encouraging discussion about at all ranks. Part of the progress toward a better working environment is the pushing of articles like that written by the original contributor across all ranks but also further, the facilitation of forums where people can offer opinion and frank criticism without fear of repercussion due to rank or experience. Somewhat ironically, that forum exists in the form of the Messes, but with most built primarily around the bar and in conjunction with the strong message to move away from social drinking, they no longer operate effectively in that function.

Another way to attempt to tackle retention – and specifically retention of top third personnel – is again tied to promotion, and specifically, eligibility requirements. The time bars on promotion are, presumably, to do with ensuring that any candidate for promotion has the requisite amount of experience to be credible in the next rank up. This is most easily justified in regimental duties by life and command/leadership experience, and in technical or trade roles by technical hands-on experience. It also makes sense when combined with a military which primarily recruits soldiers in their teens and officers in their early twenties. However, with the increase in maximum age for recruitment and the increased technical ability of the new generations coming through, the mandate for a minimum time in rank begins to fall flat, especially as it becomes increasingly likely that technical experts or business leaders will be directly recruited into the Forces at relatively high ranks.

Alternately, if eligibility in its current form is to be preserved, the filling of jobs by the most able candidates could be achieved by much wider acceptance of substitution pay or local/acting rank and by its expansion to include promotion boards. For instance, an exemplary first-year corporal could be sent to a grading board and promoted, but not become substantive until their eligibility catches up. Similarly, the provision of acting rank or substitution pay to those who end up in higher-rank jobs should be much easier to grant. Both a highly technical private who fills a trade role designated for a corporal and a sergeant who works as a troop commander should be paid as at least the next rank up. Clearly, extra funding is unlikely, but prioritising the budget over the recognition of excellent soldiers who are increasingly asked to do ever more will continue to see the top third seeking that recognition in the civilian market.

Undoubtedly, there will be resistance to any proposed changes to promotion and reporting, the disciplinary system, and the approach to retention; in part because it will be difficult for those who have been well-served by it (and therefore who have the most influential voices) to accept it has significant failings. That, however, should not be a bar to fundamental change, be it reformational or transformational. More importantly, it is essential to foster an ongoing discussion about its merits and possible alternatives. This article is an intentionally frank attempt to open up that discussion, and a request to all that when a problem is identified the solutions we consider are directed at the causes of that problem, not the creation of new systems or the simple restatement of existing standards.

Tom is a junior officer working in communications, with hands on military leadership and management experience