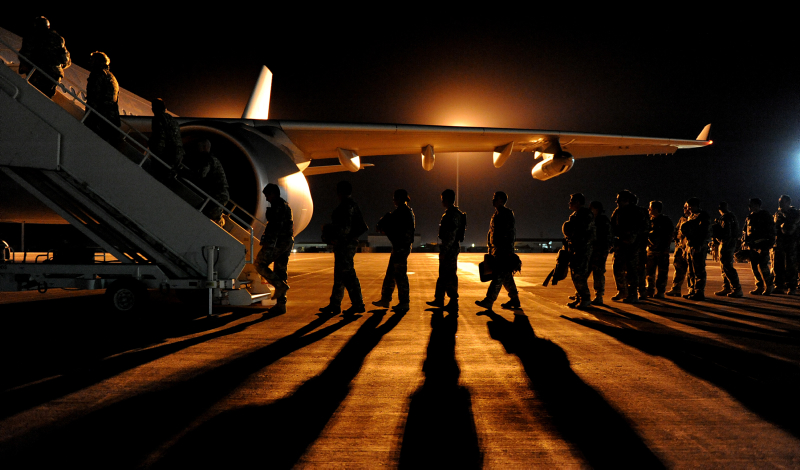 Last week the Chief of the Defence Staff, General Sir Nick Carter, gave his inaugural Christmas Lecture at the Royal United Services Institution in London.  As Christmas draws near it seems prudent to reflect on an exceptionally busy 2018 for the UK’s Armed Forces.  Although it’s never clear what a ‘busy’ year looks like for defence, between the Scripal poisoning and BREXIT implications, it is perhaps surprising that the MoD has managed, by luck or judgement, to keep our Armed Services within the grasp of the main stream media.  #DefenceMatters may not yet be an everyday thought for the majority, but it does appear to be gaining in significance.

To try and ‘wash up’ on such a year is nigh on impossible but the headlines that have grabbed our attention, for both good and bad reasons, along with a nod to the future are highlighted below.

The Salisbury poisoning in March may have focused the world’s attention on the overt threat from Russia but it is clear that during 2018 the UK’s defence seniors and political masters have struggled to gain traction in justifying how the 3 armed services support the security of the United Kingdom.  Eloquently described as the “Ghosts of Christmas” the Russian threat, instability from the USA and the balance of China’s expansion have all been discussed in a series of lectures with all three services participating ( Royal Navy, Army & RAF) throughout 2018.  How successful these interventions have been is potentially demonstrated by the announcement of £1 billion extra funding during the October Budget but, this ‘bonus’ payment does not answer any key questions and, until the infamous Modernising Defence Programme (MDP) is published, having been delayed twice already, one shouldn’t be under any illusion that these funding issues have gone away.

Whilst our Chiefs have focused on the ever changing threat, developing at pace, often described as the “changing character of conflict”, much of the media coverage this year has focused on those more conventional capabilities.  For the Royal Navy: the Carrier Strike Group, for the Army: the Warfighting Division and for the Royal Air Force: the projection and integration of Combat Air Power.  The CDS commented at RUSI that defence needed to ensure its message was clear.  He may have focused on the importance of the management of defence if his team is to make its case in next year’s Spending Review, but Defence also needs to demonstrate what it provides to a much wider electorate. There is a conflation of the understanding surrounding conventional capabilities and future threat capabilities, or lack thereof.  It may be clear to those in military circles but the message does not appear to ring true in wider society.  Maybe we could learn something from the Norwegian Armed Forces’ media campaign utilising the  “What do we want to happen?” tagline in demonstrating the internal message about what their armed forces offer society.

December saw the CDS answer questions from the Defence Select Committee, mostly focused on his first 6 months in post but significantly focused on the manning crisis  across defence.  Much has been said both of the Army’s Capita contract, defence’s approach to drug taking, fat squaddies and the growing awareness of the mental health issues of service personnel.  This article can’t hope to do the depth and complications of these issues justice, and only time will tell whether the CDS’s growing confidence in Capita’s ability to deliver is warranted.

There has been a significant amount of ‘good news’ coverage for UK defence this year.  Who could possibly forget the RAF’s centenary celebrations – RAF100 – the highlight being over 100 aircraft flying along The Mall with thousands watching on, which also included the first public display for the F-35, the RAF’s first 5th generation aircraft.  Distancing itself from the infamous Predator and Reaper drone programmes, the RAF has also begun to prepare for delivery of the MQ-9B drone, suitable named Protector, which immediately made its mark flying across the Atlantic to the International Air Show at RAF Fairford.

The Royal Navy have also been making headlines. Having ended 2017 with a leak, HMS Queen Elizabeth ends 2018 having just returned to Plymouth completing her Westlant 18 deployment to the East coast of America and completing her maiden F-35 Lighting flying trials whilst away.  There may be a question mark about the utility of aircraft carriers going forward but, no-one can argue about the utility across a wide range of tasks that “eight acres of sovereign territory” provides.

Although the opening of all roles and branches within the military to females was announced in 2016, the Defence Secretary has recently confirmed that this will also be true of all Britain’s Special Forces units. The head of the Army at the time, Gen. Sir Nick Carter, may have received much praise after his Radio 4 interview commenting that “At least we pay women equally”, the debate about women in the military will continue.  With women making up a little over 10% of serving members there is clearly a lot more that can and should be done and, judging by this week’s reaction to the all male panel at the Women in Defence conference in London, perhaps the military needs to understand that this discussion cannot happen in isolation and a bit of humility would go a long way.

November marked the end of 4 years of special remembrance commemorations.  Named Operation Reflect, the past years have seen an increased focus on remembering and learning from the devastation of the First World War.  It will be of no surprise to many that the lessons from first world war are significant and even as we look to the future, we can learn a lot from the challenges our predecessors had.

The CDS commented that the UK needs to decide if it wants a global military or a globally deployable military in a post BREXIT world but, in the meantime, 2018 has seen significant number of service personnel deployed across the globe.  The operations against Daesh in the middle east have continued along with almost 1000 troops stationed in Estonia as part of NATO’s Enhanced Forward Presence. With over 19,000 service personnel , deployed on 30 operations and exercise, November marked the busiest month for the military with Exercise Saif Sareea in Oman and NATO’s Exercise Trident Juncture in Norway testing NATO’s interoperability.

Innovation, adaptability, hybrid and grey zone would all be top scorers in any previous CDS’s Christmas lecture word bingo chart – with 2018 not being any different – but, 2018 has been marked by a real drive and focus on the future.

Unmanned Warrior, Autonomous Warrior and Project Tempest have all demonstrated that there is a real appetite to innovate and look to the future.  The competitive advantage that the UK and her allies have relied upon to be ‘match fit’ may now been completely eroded.  Projects such as these that have innovation and adaptability at heart are critical important, not for the Armed Services relevance, but for our credibility as a fighting force.

2017 ended with the bizarre story of the Army hoping to drop the ‘Be the Best’ tagline.  Here’s hoping that the pre-Christmas release date of the MDP is a bit more successful…

What Shall We Do With The Broken Sailor? – Mental Health and Me.