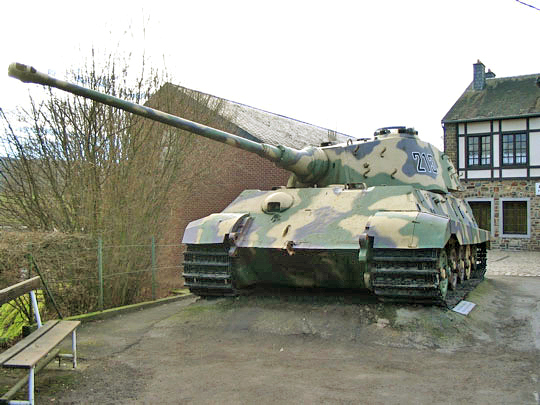 The T14 Armata tank is making the news as a fearsome machine that should raise concern among the allies and their aging tank forces. But two examples from history and a short story, as well as recent Russian experience should provide a word of caution to those sounding the alarm.

The T14 Armata moves away from the Russian tradition developed in World War II of mass producing reliable and relatively simple models of tanks. This unit is far more complex but still has specifications that make it rather formidable on paper. It has maintained a relatively low weight when compared to the U.S. army’s M1A2 Abrams. Furthermore, the Armata employs improved suspension and an efficient diesel engine, allowing it to maintain good operational range and strategic mobility. The Russian T14 Armata has a larger gun than any of the NATO tanks, at 125mm. This outguns the 120mm from the German Leopold tank, considered the best in the world. The Russians main gun can also fire anti-tank rounds.

British and American tanks like Challenger 2 and M1A2 can be outfitted with additional measures in the form of explosive reactive armour (ERA) and armour blocks. But this isn’t guaranteed to stop the Russian rounds and it adds weight to the vehicle which decreases mobility and staying power in a fight. In contrast, the T14 uses an Active Protection System (APS) new, lighter and more effective armoured survivability systems. It has infra-red jammers and smoke to ‘dazzle’ the guidance systems of anti-tank missiles that are fired against it.

Meanwhile, the allies haven’t field a tank with a bigger gun and the U.S. Army also plans to replace the 120mm smoothbore gun with a lighter version. The forthcoming M1A3 will be somewhat lighter and more mobile increasing its survivability. The main argument of the reports about the fearsome T14 Armata tank is that the Western allies of NATO would be outgunned, over powered, and out manoeuvred by the advanced Russian tanks.

But there are numerous flaws in this argument. Syria has provided much needed experience for the Russian army, but also shows they have trouble using advanced weapon systems in combat conditions.  The head of the Tactical Missile Agency said that their missiles had trouble in smoky, hazy, foggy, conditions (similar to the US experience in the Gulf War.)

Diving a little deeper, Russian forces have more serious problems than a missile that fails in the desert. They have an aging population and limited economy that has difficulty funding normal business whenever the price of oil falls, which suggests they have little staying power in a major war. Russia has modernised some elements of its army, but the bulk of its soldiers, about two-thirds, are under-trained, under-paid, and ill-equipped. Soldiers are reported to defect, and in the past they sold weapons on the black market to supplement their incomes. The operations in Syria revealed “systematic” technical problems with many of the systems they have upgraded, including the Cobra attack helicopter and advanced missile systems.

If soldiers can’t use these systems in what is essentially semi-combat and practice conditions against ISIS and rebel forces who lack countermeasures, it suggests they will have a difficult time in the case of actual war using highly complex tanks against a near peer adversary like the United States.

Despite the Russian tank being superior to British and American varieties, the Russians are looking for cheaper alternatives and will not mass produce the tank. They will instead rely upon older models like the T72 and T90A. The army expects to have only 100 by 2020. The circumstances surrounding the new tank remind me more the short story “superiority.” In a future space war one side kept inventing all of these new technologies. But they were too expensive to produce in mass numbers, and the tactics and doctrine to properly implement them were not sufficiently developed. So, this advanced race lost the war with advanced technology and their enemies won the war with better implemented and mass produced older technology.

The Japanese super battleships sounded incredibly scary on paper, but they ended up having very little effect on World War II. Those ships had incredible range, rates of fire, and with 9 main guns that cumulatively weighed more than America’s (Nevada and Wyoming Class) battleships. They were so expensive and important that the Japanese often kept them away from intense battles until late in the war when they were heavily outnumbered and strategically limited. The ships ended up spending so much time in port, especially after a submarine attack damaged one of them, that one of the super battleships was called the Hotel Yamato. This meant that these ships missed critical engagements like Solomon Islands Campaigns and Battle of Guadalcanal where they could have made a difference in the strategic balance of the war.

Once they were committed late in the war, their design flaws and deficiencies in strategy and training were revealed. The anti-aircraft guns of the super battleships ended up being inadequate due to a combination of technology and lack of combat experience from the crew.

At its introduction in mid-1944 the King Tiger was one of the newest and most feared tanks fielded by the German army. It combined the thick armour of the Tiger I with the sloping armour of the Panther medium tank. The heavy armour, with sloping design and powerful gun, made it extremely powerful against other tanks on the battlefield. But it wasn’t without flaws. The engine to move this beast required vast amounts of fuel for a nation suffering from shortages. The equipment was so complex that it required extensive repair and maintenance, which limited its utility on the battlefield.

I agree that the T14 Armata tank has some pretty advanced weapon systems that sound scary on paper, and even scarier considering Russian aggression around Eastern Europe and the Baltics. But history, ranging from super tanks and battleships, to social commentary in science fiction and the lack of mass production of the tank, suggests that the piece of advanced hardware does not have sufficient numbers, and contains enough flaws that it won’t be a fearsome game changer.

Morgan Deane is a free-lance author, military historian and former US Marine. He is the author of Decisive Battles in Chinese History and a forthcoming primer on modern Chinese strategy. You can read his political and military analysis on Real Clear Defense, Strategy Bridge, and Opslens among others.