I am a digital immigrant, despite having been taught basic computer programming at University in the 1970s and operating and managing combat data systems and data links at sea over decades. The scornful regard of my adult children for my struggles with my smartphone ensures that I remain conscious of my inadequacies. Nevertheless, having contributed my first written (and controversial) professional commentary more than 40 years ago, with many more hard copy efforts since then – and multiple blogs and tweets more recently – I offer some guidance to would-be commentators.

They prosper who burn in the morning the letters they wrote overnight.

When email was introduced into official use, Naval Officers had fewer problems with the new medium than most people. We knew the disastrous results a poorly worded signal sent by a ship at sea could have for the originator. In Naval practice, no signal conveying or implying censure or criticism is dispatched until some 24 hours have passed since its drafting. As a famous poem, The Laws of the Navy, asserts, “They prosper who burn in the morning the letters they wrote overnight” – a dictum equally applicable to signals.

There was another aspect. Although the distribution of signals was theoretically confined only to those directly addressed, there was nothing to stop their wider circulation by an aggrieved recipient. Furthermore, signal staff were accustomed to ‘robbing the broadcast’ at their own behest or that of their Commanding Officers (CO) to glean intelligence from signal traffic not addressed to them. As a Flag Officer I used my awareness of this illegal system to my own purposes – a ‘Delicate Text Personal for Commanding Officer’ signal which conveyed an individual reprimand could also function as an exemplary warning to all the other COs who illicitly deciphered the message offline.

The parallels to email and the dangers of its ill-judged employment will be clear. The parallels to other forms of social media and their dangers should be equally obvious.

I followed a few rules – some hard learnt – in my own practice of commenting when serving full time in the Navy and even now follow most as a part-time academic and pundit. Firstly, the reality that there are formal restrictions for serving military personnel on public comment must be accepted – as must the potential consequences of breaching the rules. The trick is to judge when it is necessary to work within the system and when it should be ignored. My major reason for being willing to ignore the rules was not that I would fail to toe a party line but because the approval system simply could not operate within a timescale that permitted relevance.

This was true when I started writing and is even more true in the age of social media. Ironically, at a time when Defence organisations need to be ever more agile in the public domain, their desire to ‘control the message’ is even greater than in the past. Much of this is the fault of politicians and political advisers fixated on the ‘24-hour cycle’, but their efforts too often compound with a bureaucratic propensity to be economical with the truth and a military tendency to obsess about security.

This problem can only be fixed by senior leadership persuading ministers – and their staffs – that people must be empowered to explain what they, their unit and their Service are doing. In return, those in the Service must understand that they do not have the right publicly to criticise policy and should consciously confine their interventions to what they know, not what they have heard.

Such empowerment must allow contact with journalists. Serving personnel should be able to speak when asked on matters of fact. Prohibiting such contact is a mistake made by too many governments and Defence organisations. Too much media reporting of Defence in our countries is flawed by inexperience and sheer ignorance, particularly as there are now so few specialists in the area. Journalists need help and they must be helped quickly enough to meet their deadlines. People need to be educated in how the media works and what are its professional rules and conventions, but keeping a focus on getting the story straight can only benefit all concerned. In assisting journalists understand what the facts are and what they are not the discipline lies in confining oneself to explaining those facts and getting journalists to understand just what has happened, without offering gratuitous opinions about government or Service policy.

I have much more often been asked to explain and give context than pressed to reveal new information – and the journalist concerned is always grateful for my assistance in extending their understanding. Even in the freedom of retirement and as a part-time academic, however, I much prefer being able to direct journalists to one of my published pieces rather than providing them with a ‘one liner’. Context matters and short quotes can be very misleading – so people should confirm and re-confirm with the journalist concerned just what they intend to cite and how. I particularly enjoy the power of a blog, not least because it provides both a source of understanding and quotations for journalists, but also because it serves as my ‘ground zero’ in case I am taken out of context in one of their pieces.

This brings me to my next point, that it is better to seek forgiveness than ask permission when intervening in public in a way that could be considered as comment. But make sure that the necessity for forgiveness is for a worthwhile cause and that your motives are good!  My guidance for minimising the probability of an adverse reaction is most of all to avoid anything personal and to suggest solutions or raise questions rather than simply criticise. Ad hominem comments are especially to be eschewed – and take care also that there are no hidden barbs to which individuals could take legitimate exception. I am particularly careful of throw away comments. These often give the most unnecessary offence without really adding anything to the main argument. I learned this the hard way.

Stick to the facts

Next, if one is going to pontificate, it should be on a subject which one properly understands and has the full picture. Nothing should be taken on trust – every fact should be checked (and verified). If I have any doubt that I am saying what I am only because of access to privileged or classified information, then I hold my tongue. My technique in pre-internet days was to keep a written record of news reports and articles when I was writing about contemporary developments so I could point to a public source for my assertions.  The great thing about the internet is that, provided you are alert to the quality of its sources, many matters can be assessed very quickly. But, like cutting wood, I try to check (measure) twice and comment (cut) once. Doubtful sources can be cited, but they need to be hedged about with appropriate reservations as to their reliability.

If there is time enough for someone else to look at my draft, I take it. This has two benefits. The first is that having a subject matter expert agree that one is on the right track is very comforting. The second is that it helps confirm that the draft reads the way I mean it to say.

Being positive vs being real

Any intervention should be about something that really matters, and it should be credible in content and tone. I have one concern about the tweets from well-meaning senior military Officers in the English-speaking world – a proportion are just a bit too relentlessly positive. The impression they give is, as once described to me, of being ‘Pollyanna after swallowing a management manual’. Junior commentators are also not immune to the syndrome. The fact is that the language does not have to be effusive – often, just bringing an event or achievement to the public eye is enough.

I use Twitter myself largely to draw attention to work that I have published on a blog site, or to advertise important news or commentary by others. I rarely use it to make an immediate comment and almost (almost) never to make a criticism or negative response. The reality is, and this is true for most people, my first response to something with which I disagree is likely to be rubbish – it will be an over-reaction, my facts will probably be partially in error and the context will not have been sufficiently considered.

Think it possible you may be mistaken.

Oliver Cromwell’s letter to the General Assembly of the Church of Scotland, 3 Aug 1650

This leads to my key message. Think before you transmit – and think again before you transmit. Above all, as would-be commentators, bear in mind what Oliver Cromwell once said – think it possible you may be mistaken. And if you do prove to be wrong, correct your mistake quickly and openly! 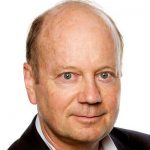 James Goldrick joined the Royal Australian Navy in 1974 and retired in 2012 as a two-star Rear Admiral. He commanded HMA Ships Cessnock and Sydney (twice), the multinational maritime interception force in the Persian Gulf and the Australian Defence Force Academy. He led Australia’s Border Protection Command and later commanded the Australian Defence College. A Visiting Fellow of the Sea Power Centre-Australia, an Adjunct Professor of the University of NSW at ADFA and a Professorial Fellow of ANCORS, his research interests include naval and maritime strategic issues in the Indo-Pacific, as well as the response of navies to changing technologies and operational challenges. His books include: Before Jutland: The Naval War in Northern European Waters, August 1914-February 1915, After Jutland: The Naval War in Northern European Waters, June 1916-November 1918, and No Easy Answers: The Development of the Navies of India, Pakistan, Bangladesh and Sri Lanka. Navies of South-East Asia: A Comparative Study, co-authored with Jack McCaffrie