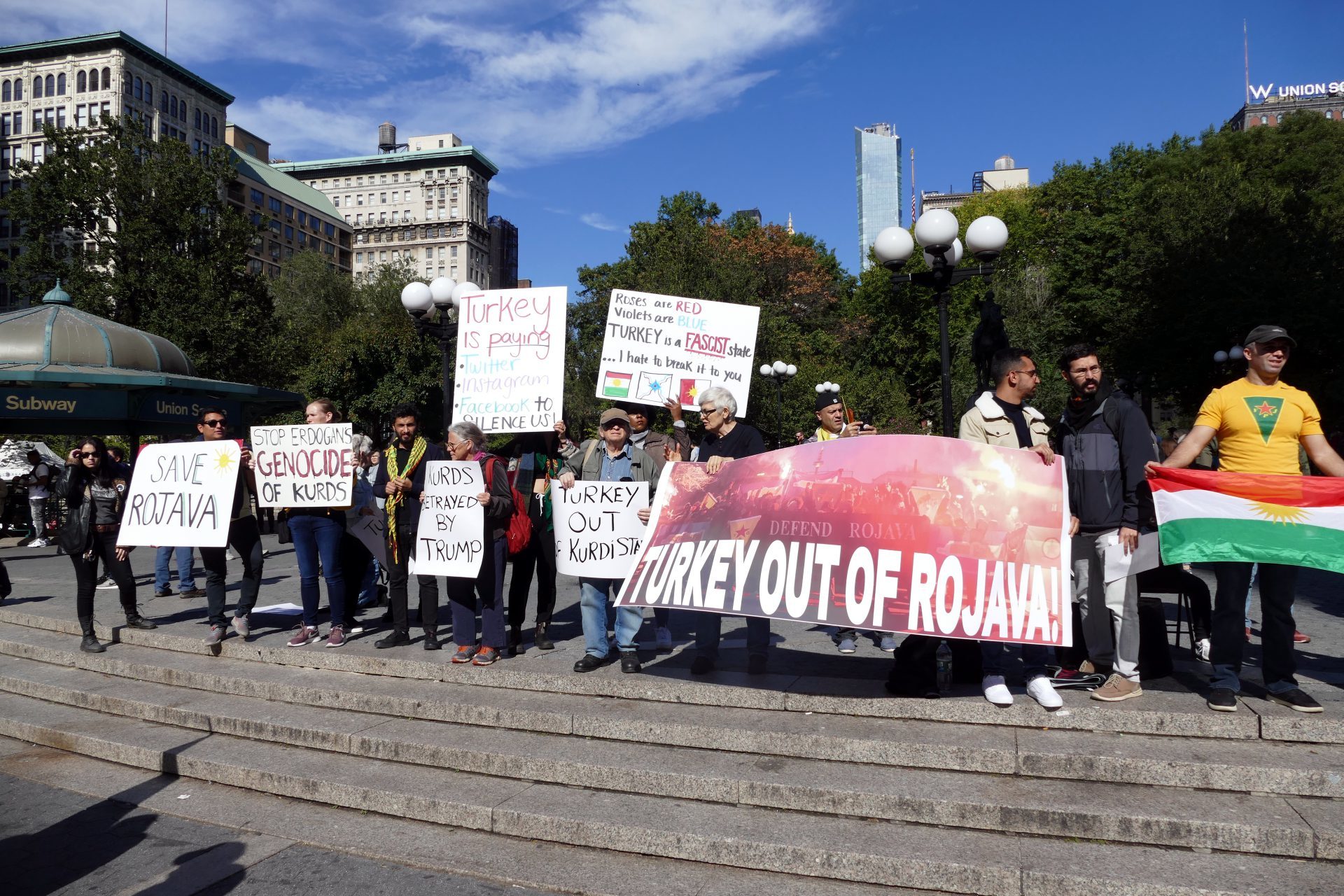 The outcry across military, political, and regional sectors over President Trump’s decision to accept the Turkish campaign in northern Syria and withdraw the bulk of American troops from the country belies the political and strategic truths that have been lurking beneath the surface of Operation Inherent Resolve.

It had to happen; the US was always going to leave Syria at some point.  Fundamentally the relationship with a NATO partner had to take precedence over a mission designed to defeat ISIS.  It was Trump who did it but it could have been Clinton, Warren, or any Republican.   For as long as the mission was live, and ISIS was a tangible threat, it was easier to rebuff the Turkish government. That’s because to some extent it is accurate to describe ISIS as a threat.  First, because they fester in the prisons and camps the SDF guarded, left by the nations they came from.  Secondly, because you can’t kill an idea.  And finally, because for some Sunni people in that area, ISIS (and similar organisations) are not the worst option and offer certain protections and options that others have not.  But we’ve been stringing this out and President Erdogan know it.

Two of those three threats are in the West’s hands to change.  Europe and other nations have largely abrogated their responsibilities towards captive nationals, assuming someone’s nationality can be cancelled as easily as their passport, thus eliminating the problem. The other is that the West has allowed Assad, Russia, Iran and others almost free reign in the area by their refusal to work in concert with them.

So why have Assad, Iran and the Europeans (by omission) affected this outcome in Syria?  One answer we must be willing to consider is that the US’ power is fading. The empire’s coming to an end.  No one automatically defers to the US any longer. While his administration may have laid bare the worst case of US disengagement, this has less to do with Trump than structural issues, although people will seek to blame him and will choose to ignore the wider picture because it’s quite a painful one.

In 2011 Obama pivoted to Asia.  China’s response was to modernise her navy and despite denials (on the White House lawn if I remember correctly) to install radar domes, military-grade runways, and anti-ship and anti-aircraft missiles to deny the South China Sea to others and to surround the US’ allies in the vicinity.  North Korea refused to deal with the US under the conditions set by the administration, and for various reasons, even Japan became lukewarm.  Since then, China has made no concessions to the US on anything; Trade War?  Bring it on.  It’s China that can withstand a long downturn, not the US.

Returning to the European plain, in the same period, Russia have invaded two European countries since 2008.  In 2018 they used a PMC to launch an attack on a US base.  Now Russian forces in Syria are taking selfies in them and sleeping where we once slept and negotiating terms of the Turkish campaign with Erdogan in Sochi. Putin is also selling AD systems to Turkey, a member of NATO. Putin holds sway (operationally) in Syria, and soon Russian forces and proxies will border both Iraq and Jordan, where some of the final vestiges of US influence in the Middle East remain.   Regardless of that influence, the US may be headed to a bit part player role in the Middle East.  Her inability to secure satisfactory outcomes in Iraq, Afghanistan, Egypt, Libya and now Syria has seen to that.

How has this come to pass?  There’s the simple fact that China is rising and Russia is managing its weaknesses adroitly, and their increased relative power needs to be accommodated in the world order.  But the US’ policy and strategy is to prevent this; read the 2017 NSS and you’ll see that the US fears the rivalry. The conditions for the Thucydides’ Trap are alive and well. Because they have poor strategy, the rest of the US’ actions may be doomed.  Power consists of three parts.  Hard, soft, and intent.  In following her strategy to date, the US has developed a huge, exquisitely irrelevant military.  If you spend that many dollars but also make it clear you’re not going to slap people when they step out of line, then no one really believes you’ll use the thing anyway.  And if you do deploy your massive, heavy, intercontinental, superbly trained, brave and loyal military then you’ll just get undone by IEDs, suicide bombers and drones from Argos.   This means that there’s little perceived threat from the US any more.  What is unique to Trump is his view of punishment as economic in nature, but he is undoing his own economy with debt faster than he’s undoing anybody else.  Mostly, his enemies suffer least of all.

And so Trump received a call from a real political hard man, Erdogan.  Is anybody surprised that Trump gets played by Putin, Erdogan and Jong-Un?  Of course not.  Trump is the best advertisement for why lateral entry into senior positions doesn’t work.  Like many, I have often thought that professional politicians were too narrow in their experience and that made them dangerous; it turns out the alternative is much worse.  And Trump is dealing with hard men with vested interests and bags of experience. They’re tough, but they respect one thing over everything and that’s hard power.  And over time the US has been unwilling to use it; for all his bluster, Trump in action seems to lack the will to use that power.  But his decisions are an extension of a long-term flawed strategy, an effect not a cause.

Of course the stupidity, poor timing and shameful nature of the promulgation of the decision revolts most sane people.  The completely predictable descent into murder and chaos is awful for those who suffer it, but in and of itself it won’t change much.  And we should recognise that Turkish concerns are valid.  The SDF and the YPG are absolutely the PKK in another guise (remember the Ocalan flag they flew after taking Raqqa?).  They seek independence from Turkey, and violently.  But sadly, for Erdogan, the Turkish military are not equal to the task.  Their operational level of command was deleted (with some justification) by him after the coup.  They had to hire Al Nusra front to fight against ISIS in 2016/7 because their own people were incapable.  Soon, they’ll get held up and will exhaust themselves. While ISIS may rise in the wake of this campaign, it won’t flourish as a state because the Russians won’t let them.  The Kurds will be squeezed and there will have to be an accommodation between them and the Syrian regime, or a genocide.  But there is little political will to support the Kurds, so it won’t affect anybody strategically.  Eventually Russia will dominate throughout Syria, but no more quickly than if the US had withdrawn ‘properly’.  Allies of the US already know the US is unreliable; those around the South China Sea, the borders of Europe and almost anywhere in the Middle East have already experienced it.  It’s why no one listened when Obama told the world to ignore the CPTPP or when the SDF called for prisoners to be repatriated.

And remember that Trump doesn’t understand or care.  So one probably shouldn’t get too upset about the character of the withdrawal as it will change nothing.  But there are two lessons we can learn, if we choose to do so.  First, the militaries of the West need to be updated.  Our exquisite equipment needs to go into the reserve.  Instead, we need artillery, STA, information operations, and mass to swarm in air, sea and land.  We need to operate deniably, and sub-threshold.  We need to accept that COIN tactics are great but the brushfire conflicts we seem to face may include a willingness to put large numbers of enemy to the sword (think of the Tamil Tigers getting erased).  If you’re not willing to do that then you need to hire people who are.  So, we need to hire proxies, and to generate troops other than SF who can operate train others to fight on the ground for us.  What is frustrating is that this nirvana was being achieved with the SDF, but this furore about the withdrawal means that the military community risks missing that.

Secondly, remember that this is not about the US letting her allies down.  That’s just a symptom of a diminution of power and the need to accommodate others to prevent a wider conflict.  Nobody is going to challenge the US head on militarily.  They’ll do it under the wire, and destabilise the rest of the world instead.  Unless, that is, the US slaps a few people at the right time, sets the boundaries, accommodates the rise, and takes the brakes off the sanctions.  That’s something that we can all hope for and vote for.  This can still be shaped.

A crumb of comfort is that I sense this is the beginning of the end for Trump.  Tipping points are funny things, but there does seem to be a different mood around him now and he looks increasingly isolated.  He didn’t need this on top of the impeachment.  Just last weekend, the White House announced that next year’s G7 meeting has been relocated from Trump’s own gaff to somewhere he won’t directly make a profit from.  That’s a change in behaviour aimed at appeasing his Republican critics, which is new ground.

The sadness for me is that alongside the upwards of 10,000 SDF who died fighting ISIS, so did a number of US and coalition service people.  Trump’s style of withdrawal shames him because he discounts the value of that sacrifice.  That’s what we should have at him about; that’s where he’s vulnerable.  Similarly, the US’ failing strategy discounts the 10s of thousands of service people from the US and other nations who fought in WW2 and afterwards to give the US the authority to be the leading light in the world order.  Failing to shape the changing nature of that order and to peaceably incorporate others in it is the real problem.  We mustn’t let the moronic crassness of the immediate decision distract us from that.

John is an active duty officer in Her Majesty’s Forces. He has written previously on military policy and personal experience at CCLKOW