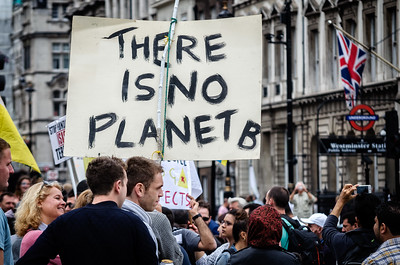 Whilst much has been written on how climate change will affect global security, including how this will affect the military, there has been little consideration of how the Armed Forces themselves could be used to mitigate climate change, or induce ecological behaviour in others. With the Integrated Review approaching, the Armed Forces should take this opportunity to offer a further pillar of national power to combat the climate crisis.

Unless you’ve been living on a plastic island in the Pacific for the last twelve months, you can’t have failed to notice ecological issues climbing the political agenda. Pressure from civil society has forced governments to respond. Notably, the Ministry of Defence appointed Lieutenant General Richard Nugee to lead a review into Defence’s approach to climate change. Yet we should have a more radical aim than simply making the MoD carbon neutral. Given the overwhelming scientific evidence of climate change, the predicted consequences and their far-reaching impact on global security, mitigating climate change and its effects must be placed at the core of any new UK national security strategy.  Furthermore, all levers of national power, including the Armed Forces, should be employed in support of our ecological interests. This presents the British Armed Forces with an opportunity to use our unique capability in support of this interest and, in so doing, make the case for the military’s continued relevance in the Integrated Review. Using the spectrum of conflict 1 as a handrail, this article will suggest how the military can and should contribute. This ranges from uncontroversial humanitarian and disaster relief missions, through to imagining how a focused intervention could be used to enforce international climate treaties or defend national or collective ecological objectives.

Climate change has been interpreted through a security lens most regularly by those who see preventing ecological damage as a valuable end in itself. It is difficult to disagree. The prevention of human tragedies abroad brought about by climate change, not to mention the inconvenience and cost at home of extreme weather patterns, point to a moral human security goal. Even a hard-headed realist assessment of our security shows it is clearly in the interests of the state, not to mention the society it serves, to mitigate climate change. Areas where climate change has affected ‘conventional’ security issues are almost too numerous to mention. As the ice caps have receded, the Arctic has been opened up as a location for strategic competition, making previously uneconomic natural resources viable. Russia has reopened military bases in the region and is modernising its Northern Fleet. Desertification in the Sahel, has fuelled instability in African states, and driven migration north towards Europe. Climate change will almost certainly lead to political changes as global weather becomes more extreme, fragile states will struggle to meet the aspirations of their growing populations, creating the security challenges of the future. The UK’s security, and those of its allies, will be affected by these changes. There are also potential diplomatic and political benefits of being seen to do ‘the right thing’.  Being at the forefront of attempts to mitigate climate change could lead to diplomatic benefit elsewhere, as well as being of presentational benefit for the Armed Forces. What more moral cause could there be than the survival of the species? Therefore, I suggest three imperatives for action. Moral: acting is the right thing to do. Realist 2 : it is in our interests to act. Presentational: others will thank you for it.

An emergency for the Armed Forces?

One could argue that even though climate change is a pressing security issue, it is not the Armed Forces’ place to be involved. However, the national security strategy demands that the UK should use the full spectrum of our national power in order to achieve its aims. For example, whilst the military have been busy degrading Daesh and building the Iraqi Army’s capability, the UK has concurrently used its economic levers (sanctions and watchlists) to disrupt extremist finance and our privileged diplomatic position to build a coalition against the group. Thus far in the fight against climate change, arguably the most important and all-encompassing challenge facing humanity; we have excluded the military element of national power.

So, if we are to act, what means should the military bring to bear? At the softer end of the spectrum of conflict, the military could be employed to undo ecological damage, effectively performing a humanitarian assistance and disaster relief role. This would likely take the form of logistical support to civilian organisations either in tackling a specific crisis, such as fire on an ecologically important site, or resolving a long term problem, such as Pacific garbage patch. Whilst these are all laudable and will likely message well, they may not necessarily be the best use of scarce military resources and could be conducted by contractors or a civilian department. Whilst such activity ticks the moral and presentational boxes, and therefore should not be dismissed as a role for the Armed Forces, the lack of any significant realist gain is apparent.

The British Army already provides support to local security forces combating poaching in Malawi. This would be any excellent model to export elsewhere in support of an ecological national security objective. Consider the Amazon, where security forces are often overwhelmed and unable to effectively combat illegal deforestation. With host nation acquiescence, UK support could support the development of security forces to protect ecologically vital assets, such as rainforests. The Malawi anti-poaching model is laudable. It messages well (ticking the presentational box), is likely considered moral by the vast majority of the British (and global) population, and also supports more hard-headed realist national security criteria. The UK could use a contribution in such an operation as diplomatic leverage in international forums. It would protect ecologically vital sites, reducing the impact of climate change on fragile states, supporting the UK’s national security objectives.

The military has an ability to use force to change the cost benefit analysis of other actors to induce them to comply with our will. Moving along the spectrum of conflict, with the consent of a partnered host nation the UK could apply force directly against an actor causing ecological damage or enforce a mandate to protect shared ecological interests. Consider the possibility of a request for assistance from Brazil, with police and security forces currently unable to prevent illegal deforestation. UK personnel could be employed to directly interdict loggers or offer other niche military capabilities, such as reconnaissance and intelligence. In this case, we would see the welcome combination of a morally sound end, which messages well and supports our national security goals in the longer term.

More controversially, given the lack of meaningful enforcement of climate treaties and the overwhelming temptation for states to elude their obligations, consider the prospect of the UK attempting to enforce international climate treaties using military power. ‘Climate strikes’, if you wish.  Legal mechanisms that could form the basis for such an intervention raise further debate. However, environmental crimes, sometimes referred to as  ‘ecocide’, could be considered crimes against humanity, allowing intervention under ‘responsibility to protect’ (R2P) when a state ‘is unable or unwilling to fulfil its responsibility to protect, or itself is the perpetrator. A sovereign UK approach to this is unlikely, noting the limits of our capability. However, in concert with our allies and an appropriate UN mandate, the UK could use the Royal Navy to enforce sanctions on a country in breach of a treaty. In this concept’s most extreme manifestation, we could consider DESERT FOX style interventions to induce states to conform with their stated international obligations.

The UK and its western allies generally emit more carbon per person than in low income countries, where many of these operations would likely place. This will doubtless lead to accusations of hypocrisy, particularly when some prominent countries decide to withdraw from or ignore climate treaties. The idea that military action would be taken against important global actors such as the United States or China for breaches of climate treaty obligations is not credible. However, the problem of alleged hypocrisy already exists in our current and recent foreign policy dilemmas. Inconsistent application of our stated ends is inevitable, as policy collides with military practicality.  Given finite means and political reality, this point doesn’t undermine the military’s potential utility, but raises valid questions about the consistency of its application.

There would be an opportunity cost to such interventions. Employing soldiers to guard rainforests, would mean that they could not be employed, for example, training local security forces to prevent threats to the UK upstream. However, as climate change will likely be a driver of the UK’s future conflicts, the most efficient employment of the UK’s military lever is to limit the effects of climate change in the first place. Furthermore, one can already question the efficacy of contributing troops to several of our missions. UK deployments to Somalia and Mali have not fixed those states, nor are they likely to. A fixation on attempting to solve ‘traditional’ security issues, including terrorism, may not longer be the most efficient use of scarce military resource. We should seek to broaden the scope of our ends.

Finally, at the ‘general war’ end of the spectrum of conflict, as states’ populations become increasingly aware of their ecological interests, there could be calls from citizens for their states to attempt to enforce those interests. Consider how pollution moving from one state to another, affecting vital national interests, could provoke hostility or conflict. In the most extreme cases, if a state were able to demonstrate that its population were coming to harm as a result of ecological damage by another state, could it attempt to claim that this was the equivalent of an armed attack and therefore act in self-defence? Much has been made of potential water wars. Given the scope for pollution to be created in one state and directly impinge on another’s interests, we should seriously consider the prospect of carbon wars.

The green lobby and the military have not been historically good bedfellows. Whilst what used to be niche ‘green’ issues are now mainstream and are even accepted as threats to global security, it is unlikely that we will see a wave of enthusiasm from the most ardent environmentalists for the military to be used in support of their ends. Whilst it would be a shame for a valid military contribution to be excluded from a necessary environmental response on the grounds of ideology, this could be where (not for the first time) the design of strategy collides with political reality.

The case for the military to be employed to combat the climate emergency is overwhelming.  The Integrated Review is the perfect opportunity to formalise this new approach, placing climate change at the core of the UK’s national security strategy. The military should advertise its potential use: building the resilience and capability of partnered states to defend ecological goals or even enforcing climate treaties, finally giving them real teeth. The exclusion of a key pillar of national power from the response to the greatest challenge of our times is sheer madness. With an Integrated Review knife fight looming and a politically popular end to support, there may never be a more favourable climate for us to prove our green credentials.

Adam has leadership experience at the Sub unit level, and has worked in Battalion and Brigade Head Quarters around the world.