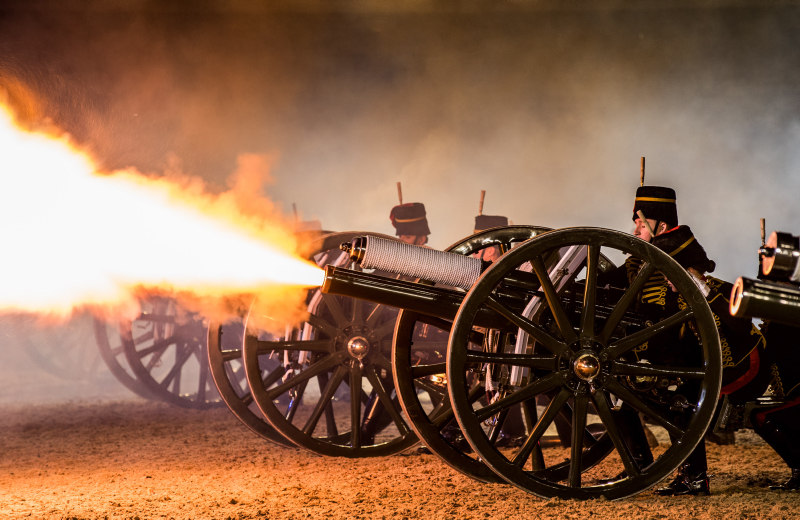 After thirty years focused on small wars and smart munitions, the Army looks set to update its gun park. The potential of facing an enemy who has a lot of fire support, can contest the airspace, and could dominate the electronic spectrum, has turned back the clock to an era when cheap, dumb, un-jammable artillery dominated the battlefield. The Army is hoping to buy greater range and more explosive effect but it has also recognised the need to relearn how to use old-fashioned artillery and how to defend against it1.  This article aims to show how one of the key foundations of artillery effectiveness needs to be reconsidered before the upgrade.The last time the fundamentals of artillery effectiveness were examined with real rigour and vigour was at the tail end of the Cold War, in a series of studies that ended with the development of AS90, MLRS and the Battlefield Artillery Target Engagement System. BATES was designed to let individual batteries respond quickly to unit-level calls for fire, but, when needed, multiple dispersed regiments could concentrate fire along the line of main effort.  One of the benefits BATES had over the old chinagraph system was that it could do this quickly while avoiding the many problems of overkill – wasted rounds, smashed infrastructure, slowed advances and so on. This was made possible because the secret ingredient in BATES was the calculation of how many rounds of what type of fire support were needed to have the required target effect.

But what was the target effect? Most wars begin with gunners focused on the killing power of their arm, but slowly coming to realise that ‘destruction of a major portion of enemy personnel, weapons and fieldworks is generally impossible’2.  By the end of each world war, gunners accepted that the main effect of fire was something psychological. But this lesson had to be relearned many times because the nature and extent of the psychological effect was unclear. Did fire gradually erode the enemy’s will to resist, shock him with its ferocity or simply convince him to take cover long enough for ground troops to assault? Nobody knew, and there is still no hard answer, which is a little worrying after a century of experience using artillery to suppress. The enduring uncertainty is one reason why, despite precise munitions and a focus on ‘influence’, liberated Mosul in 2017 looked a lot like liberated Caen in 1944.

From 1915 to 1991, the debate over the nature of artillery suppression ran alongside efforts to calculate a magic formula for the type of fire support needed to quash enemy resistance. Cold War analysts made elaborate mathematical models that had different levels of psychological effect for long bombardments, whirlwind barrages, diehard defenders and sullen conscripts. But despite generations of soldiers learning through trial and error, there was no reliable data for the analysts to plug into their computers. It turned out that on the day of battle most people were too busy fighting to keep an accurate record of what rounds went where, who they dropped on or how many of those people surrendered. Combat reports recorded weight of fire vaguely and inconsistently, and very few had reliable records of the effect on the target. The analysis team was faced with a choice between drilling down into hundreds of unit war diaries or throwing in the towel3. Then they discovered the Swann Report.

Lieutenant Colonel Michael Swann (later Lord Swann, chairman of the BBC) was a zoologist turned soldier, and in the last months of the Second World War he produced what is still the most comprehensive assessment of artillery effectiveness made by any army in any war. His report contained data on four battalion attacks from 18 November 1944 (part of Operation Clipper) and 12 battalion attacks from the first day of Operation Veritable (8 February 1945). By recording the weight of shell, the number of rounds and the level of German resistance on each battalion objective, Swann gave Cold War analysts exactly what they needed4.

The Op Veritable fireplan was arguably the most intense of the war. It opened with 1,852 guns, from 40mm Bofors to 240mm super-heavies, all firing indirect fire support onto a 10-kilometre front. In the first 14 hours close to 700,000 shells were fired 5.  By comparison, Alamein’s famously heavy fireplan was rather tame, with 1,000 guns firing a million shells, but taking more than a week to do it and on a 32-kilometre front6. Veritable’s fireplan included five and a half hours of preparation and counter-battery fire, at least one false start to prompt defensive fire, a vast smoke screen and a pepperpot programme where mortars, tanks, anti-tank and anti-aircraft guns rotated their indirect engagement of forward strongpoints.

This was followed by the barrage, a wall of fire 4,500 metres wide and 450 metres deep, where 6,500 shells fell in every grid square every hour. As the barrage stepped forward at 25 metres a minute, it was followed by 12 British and Canadian battalions supported by 400 heavy AFVs, including Churchill infantry tanks, Sherman Flails, AVREs and flame-throwing Crocodiles. By the end of the day, the British and Canadian troops in 30 Corps had fought through seven kilometres of the forward defensive line, almost collapsed the German 84 Infantry Division, destroyed four of its battalions and taken 1,100 prisoners. As the attacking units paused at the edge of the Siegfried Line there was no formed defence between them and the Rhine bridges at Wesel, 40km further east. All observers agreed that the key to Veritable’s opening success was the psychological effect of the fireplan, with close to 20 prisoners for every German casualty, and the casualties on both sides below five percent.

The Swann Report described the psychological effect but contained a curious contradiction. On one hand, the written assessment claimed most of the fire was overkill, with suppression achieved with a small number of shells, a more efficient result from using smaller shells and an enormous effect from troops assaulting as soon as fire lifted. In contrast, Swann’s published data showed a simple and strong link between the number of shells fired and defence effectiveness7. Unlike his written assessment, Swann’s data easily fit into computer models, like the one in BATES or those that will be used to plan the next artillery upgrade. It was a simple graph where the number of shells goes in one end and the psychological effect comes out the other. New research has found a problem with this.

Like any field researcher, Swann had to cut a few corners. Because he wrote his report while those 12 Veritable battalions were still fighting toward Wesel, he often had to get data on defence strength and attacker casualties from corps headquarters. There were inevitable errors, and the most dramatic was for the attack by 4th Battalion, The Royal Welch Fusiliers. Swann’s sources said 4 RWF fell behind the barrage and lost 20 fusiliers to one defending German company, but war diaries and unit histories have the Battalion fighting a near-perfect battle, suffering only five casualties, and capturing two companies worth of prisoners 8.  Note the difference this makes to the 4 RWF data point in the ‘before’ and ‘after’ graphs shown below.

‘After’: corrected data from battalion sources.

The reassessment of Veritable sources moved most of the other data points too. The result is more confusing than the original straight line and needs a little explanation. First, there are only nine Op Veritable data points on these two graphs, not 12. Two attacks had to be excluded from the analysis because they suffered unexplained disasters that meant most of their fire support was an effort to dig them out of a hole. Another attack had to be excluded because most of the attacking battalion’s casualties were due to friendly fire. Of those with good data, two were urban attacks and two were difficult for other reasons (marked on the ‘after’ graph). These four attacks need a long explanation, but the main difference was the delay between fire and assault; a delay that was often caused by the craters, rubble and bogs blasted by the heavier shells fired in support of those attacks.

That leaves only four actions from Clipper and five from Veritable, nowhere near enough to support statistical tests or to plug into a computer model but look at the new trendline in the ‘after’ graph. With the Clipper attacks included, we get a pretty hockey-stick, without them there is a nearly flat line along the bottom of the chart. Either way, increasing the volume of fire above quite a low level looks to have had next to no effect on the outcome of the battle. The ‘after’ graph is much closer to Swann’s written assessment.

There are hundreds more war diaries to chew through –Op Veritable continued for another month and there was a wide variation in artillery support and mission success– but this initial analysis gives a good starting point. In all those attacks along the bottom line of the ‘after’ graph, the infantry stayed close behind the barrage and captured the defenders just as they were tumbling out of shelters to man their fire positions. They were able to do this because the barrage was predictable and the explosions were small, with a 25-pounder shell having about the same physical effect as a modern 60mm mortar. But the key to success was that gunners and assault troops were trained to coordinate their actions.

The problem today is that Swann’s written assessment never made it into BATES or into the computer models that will be used to inform the coming artillery upgrade. All they got was that straight line showing a tight link between fire and effect. No doubt the Army needs better long-range artillery to compete with likely threats in the deep battle, but it is in close support that the guns are decisive, and only then when they are closely coordinated with armour and infantry. There is a chance that current studies will repeat the Cold War error of garbage in, garbage out, and buy bigger guns and bigger bangs, when the evidence points to the most profound effect coming from smaller bangs in a close combined-arms battle.

Dermot is military psychologist who also does operational research. He is trying to do a PhD on the tactics that made Nazis run, hide and surrender in Op Veritable to see whether they can be applied on future ops. If you’d like to help or tell him how wrong he is please follow the link at www.wapentakes.com/tactical-psychology.

Contributing to the understanding of veterans in the UK: the Veteran DNA