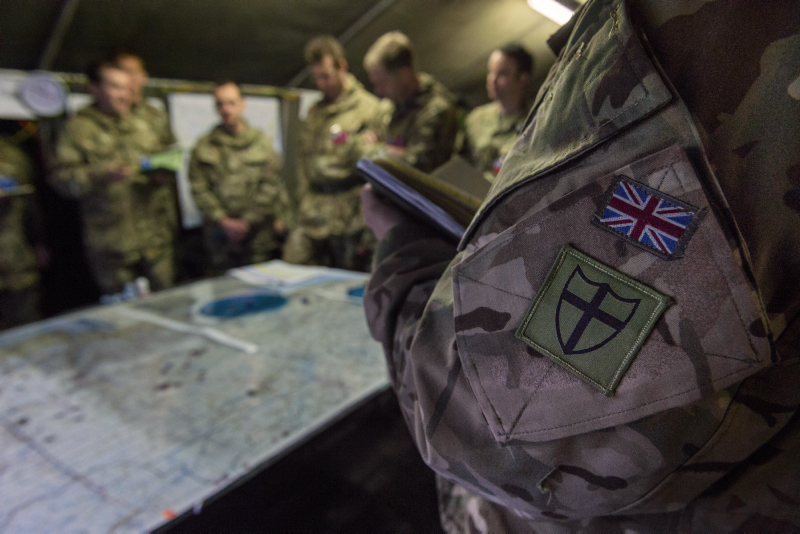 To be blunt, the British Army needs a more competitive, robust, and difficult training regime to generate Command Posts that are ready for combat operations. Command Post Training Exercises are used to test a staff’s ability to both plan and execute military operations.  Such exercises all take a similar format with a defined primary training audience and an exercise ‘wrap’ placed around them by a higher controlling headquarters.  Computer simulation is used to generate the frictions of combat.  The training audiences are assessed by the Combined Staff Tactical Training Group through a series of training objectives backed by subjective commentary.  This model has worked for the British Army for many years but its limitations are beginning to show as the Army rebuilds its war fighting credibility.

This article argues that current methods of staff training do not meet the modern requirement.  It is too easy and does not adequately simulate the mental and physical strain of combat.  A large concentration of resources is required for very small outputs with a fixation on staff process over the execution of operations.

The problem: It is not unusual for a headquarters to deploy into staff training buildings, such as the Command and Staff Training centre in Warminster, to be validated.  This brings many human comforts and stable communications but the conditions are not realistic and do not simulate a war fighting environment.

Scenarios are often overly scripted with limited scope for free play or imagination from either side. A list of predictable injects is inserted at a steady tempo.  This writer once witnessed the issue of ‘Kit’ magazine and the slow burning equipment issues it reports on, as a serial.  Previous scenarios are often used repeatedly denuding training value as a headquarters reuses the same staff work with limited changes.   One recent commentary goes so far to say that we lack imagination because of it.

Each training event should be bespoke and designed around the operational threat of the day not the default scenario.  This is neither the generation of wartime friction as foreseen by Clausewitz nor an adequate test of battle staff.

That this is considered normal by a majority of staff officers should be considered abnormal. As soldiers, our job is to deliver effect on the battlefield and this looks nothing like a clinical staff training centre.  The US Army has similar problems in exercise design and execution.

The Army’s methods of training validation also require more scrutiny. The current method relies on exhaustive lists of training objectives under which observers must make subjective comments and apply a green/amber/red grading.  Observers – who often have no additional training over those they comment on – then produce graded assessments which, theoretically, the validating commander should review.  It would be interesting to see if these observations are ever used meaningfully after they are written.

The Army’s fixation with training objectives over fluid manoeuvre blinds us to what we are trying to train; a warrior culture and ability to react to the situation as it is presented inside a realistic brigade and divisional context and within a unit’s concept of employment.  A former staff observer, Jim Storr, would identify the reluctance to change or challenge the system as ‘institutional conservatism’.  (A good summary of his research is HERE)

Another problem is time and resource. Each brigade must run a command post exercise to validate its subordinate unit headquarters.  Each exercise has a large resource bill, particularly in man-power, and exercises are run multiple times to validate each unit independently.  An armoured infantry brigade, therefore, must run five command post training exercises as well as complete its own validation training.  This takes nearly 1/3 of staff time to plan and execute.  It also places a significant burden on the Force Troops Command element who are regularly deployed elsewhere.  A general lack of investment at any level can have disproportionate impact. It is simply not efficient.

The combination of these factors has led to a situation which demoralises staff officers who repeat the same or similar exercises with little imagination shown in their design.  The aim of battle procedure is to deliver a soldier onto an objective with the minimum of fuss knowing exactly what is expected.  Our staff training output often forgets this with a focus on process over output.

A solution: Train together, trust each other, fight together.  What is needed is a training process that binds teams together focussing on the human aspect over the procedural.

If the base design of an exercise is in a clean clinical building then we have the wrong attitude. Headquarters should routinely deploy into the field and conduct tactical manoeuvres.  In part, the roll out of the headquarters battle craft syllabus will fix this but all staff officers have a duty to realise that the British Army must do more to be genuinely agile and flexible.  Change of command drills should be just that, fast and efficient drills.  This will also require aligned signals squadrons to improve their relationships with the headquarters they serve to build the human relationships needed. Field training is absolutely the best way to simulate the frictions of dislocated and distributed command that is written about and discussed regularly.

The British Army also needs to become more comfortable with combative exercises and failure. Failure is one way in which the British Army, in particular, forces meaningful reform.   Opposing forces should be manned by appropriate staff to challenge the training audiences. For example, the Army’s 1stDivision could form the opposing force for the 3rdDivision’s validation with both audiences achieving the appropriate validation because of it.  War gamingis another method of achieving this.  If you believe that this is not possible then you must remember the Army’s core output is a war fighting division.

Opposing forces should conduct their own combat estimates and be ‘controlled’ by orders not exercise controller’s.  A stronger opposition makes a stronger force.  Whilst in the field black and red forces must attack deployed headquarters to assure their security and provide genuine tactical problems.  We must be comfortable with not understanding in full detail what an opponent is doing – we will not control the future and therefore must not overly control our training.

Formations should train together and be validated over the course of one yearly exercise.

This would raise a manpower bill for suitable observers and place a concentrated demand on the field equipment required.  But so what?   A single exercise validating an entire brigade reduces the need to run multiple exercises and the training time is actually condensed.  The benefits, in terms of human and procedural outputs, far out-weigh the costs.

Many of these issues have been identified across the British Army’s fighting division. The 3rdDivision’s Headquarters deployed to the US Army Warfighter exercise‘in the field’ and both the 12thand 20thArmoured Infantry Brigadeshave recently been validated in their deployed headquarters. Our mind-set, however, requires a deeper change.  Staff officers should be prized from Dii terminals and formations trained and validated together.  As a team.  Ultimately, an Army will be tested in combat not by training objectives.  The Army needs a greater focus on output over the staff procedure.  Training should not be routine or comfortable.  It should test an organisation in un-predictable and difficult environments both mentally and physically. We are not getting it right today.