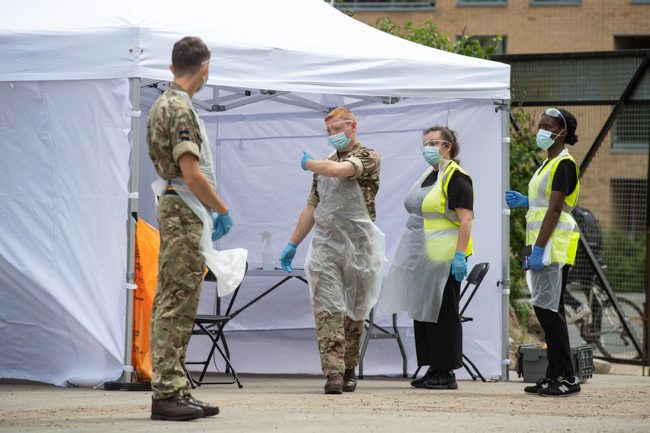 There is always an almost unstoppable temptation to reinforce success. The MoD’s contribution to the UK’s COVID-19 response was certainly one of them. However, the MoD must avoid diverting intellectual energy and finite resources to improving its contribution to UK civil resilience. A greater focus on civil resilience will reduce its core competency and capability for future missions, as well as displace more appropriate alternatives.

The MoD COVID Support Force provided a key element of the UK’s response to COVID-19 in three areas as described by the MoD; strengthening public services, supporting the NHS and protecting communities. 23,000 personnel were deployed, with more at higher levels of readiness were they to be needed. Tasks involved delivering vital medical equipment and PPE, providing specialist drivers for bulk oxygen deliveries and ambulance trusts, advising on logistics and planning, supporting overseas territories, carrying out medical evacuations with fixed and rotary wing aircraft, and contributing to the rapid provision of temporary care with Nightingale hospitals, to name but a few.

The defence social media response was also a notable component of the integrated response, with regular and informative content across the main channels, magnifying cross-government messages as well as showcasing the defence contribution. In short, the MoD’s COVID efforts are an undoubted success.

Whilst it is too early to speculate what the end of the COVID-19 response might ultimately look like, it will end. Once it does, the MoD will face tough questions about what happens next. Success is intoxicating, and success on Military Aid to the Civil Authority (MACA) tasks doubly so. The public admiration and widespread praise across government bolsters Defence’s self-image as a body that serves the nation in its time of need.

It might therefore be tempting for the MoD to see a greater role for itself in UK civil resilience. This might manifest itself as strengthening regional brigades, holding stores and personnel at higher readiness states, and more training for civil resilience tasks. It may even decide to invest in specialised equipment and formations to better address the civil resilience demand – like the ill-fated Civil Contingencies Response Force (CCRF) created after the 2002 Strategic Defence Review – New Chapter.

The Case for Less

However, the MoD and Government at large should resist this temptation for three main reasons; availability, institutional focus, and more appropriate alternatives.

Availability at the Point of Need. The scope and scale of future demand on defence for civil resilience is unknown, but timing is everything. If military forces were significantly deployed overseas, it might not actually have the capacity to deliver against its civil resilience obligations. Or if those civil resilience obligations were more firmly established in defence planning, it will reduce forces available for other commitments. This problem of ‘spinning plates’ will be made worse if the Integrated Review results in force reductions. If the public and private sector see a MoD that wants to do more in civil resilience, being blunt, it will let it. But if the MoD makes commitments, and for any reasons is not there at the future point of need, it will create many negative outcomes for defence and the nation.

Institutional Focus. Defence exists for the purpose of applying violence (or the threat of violence) against the nation’s enemies in pursuit of national objectives. This might seem a little old fashioned in a world of hybrid threats and fusion doctrines but nonetheless, defence must focus on conventional deterrence and warfighting. The nation does not have any other organisation that can do this mission, unlike civil resilience, for which it has many.

The MoD will have to grapple with many defence challenges in the coming decade. For example, several have suggested that COVID-19 will exacerbate instability around the world. Post-COVID, our periphery and allies may come under increasing pressure from instability and conflict, Deborah Haynes reporting comments from Jens Stoltenberg,

Being better equipped for civil resilience contributes little to conventional deterrence. Given the scope of challenges Defence faces and the lack of funding it receives – likely to be made worse by the Integrated Review – Defence ought to stick to its core priorities, not catching the zeitgeist.

More Appropriate Alternatives. The use of defence resources for the COVID-19 was appropriate given the lack of timely alternatives, but this lack of better options is a serious national resilience gap that needs addressing. Whilst defence has a highly flexible workforce, established command and control arrangements and a range of applicable specialist capabilities, many of those capabilities deployed for COVID-19 are not unique to the armed forces. There are about 60,000 HGV drivers in the UK and 340,000 electricians, not to mention countless construction project managers and logistics personnel. Why were they not able to be more effectively utilised for the temporary hospitals, oxygen tankers or PPE deliveries in the early stages of the response?

The minutiae of public sector contracting arrangements or lack of established arrangements in the NHS and responder organisations may have meant the path of least resistance in the shortest time was Defence, but to use a medical metaphor, that is a cure – it does not address the underlying condition. As Dr Gary Blackburn argued in his inaugural blog post, the MoD cannot ‘bear the weight of the sum of basically everything on its shoulders’.

Other organisations must step up to this challenge. They are better placed to do so. How can government ensure that, come the next crisis, they do?

One of the great fallacies is that disruption always leads to change. Much commentary today is about re-shoring supply chains, working from home as a default and changing global governance structures. We may yet see these significant societal, political and economic shifts. However, in reality, small modifications and incremental improvements are far more achievable and valuable.

Without reaching for the reflexive ‘more PPE stocks’ or ‘a national reserve force of oxygen truck drivers’ I suggest an improvement work stream is implemented in three stages;

Firstly, the Integrated Defence, Security, Foreign Policy and International Development review should broaden its scope to include civil resilience, especially in regards of bio-security and pandemic response, although it should also include other types of disruption. A larger stakeholder group might include the Department of Health and Social Care, the local and regional Resilience Forums, the Emergency Planning Society, devolved administrations, British Standards Institution, Cat 1 and 2 responders as defined by the Civil Contingencies Act and the Business Continuity Institute. This diverse forum could deliver a more holistic set of recommendations. Whilst timing may be against incorporating other national reviews of the COVID-19 response, the defence and security review should consider any early observations or emerging themes from them. It should focus on the processes within the public and private sector that translate clearly articulated risk into appropriate, funded and sustained mitigations.

Secondly, the UK’s legislative and regulatory framework should be adapted to enable greater focus on national resilience. For example, a revised Civil Contingencies Act 2004 and its associated guidance may provide an effective vehicle for change, especially relating to the scope and obligations for Category 1 and 2 responders. Regulatory change for healthcare providers, certain logistics sectors and others is not glamorous but would likely be more effective than complicated and resource-intensive organisational restructuring. That said, some simplification of the complex patchwork of organisations that cover UK civil resilience and emergency response would not go amiss where opportunities exist.

Thirdly, instead of high profile top down initiatives like the failed ‘Big Society’, the UK should develop further its many grass roots resilience education and community response groups. There are many national and international examples to draw good practice from. Elisabeth Braw at RUSI is leading some very interesting research in this area and the All Party Parliamentary Group on Social Integration have recently published a comprehensive report on the subject. Although it benefited from central Government funding, the NHS Volunteer Responders, powered by the GoodSAM app was a good example of community volunteering. Any reflex to create new central Government departments and bureaucracies should be avoided.

To summarise, the post COVID-19 world has yet to fully reveal itself, but I would argue that whilst the nation undoubtedly needs to improve its civil resilience capability and capacity, it should do so in modest and sustainable steps. It should build on existing structure and practice, changing the regulatory frameworks to encourage greater participation at all levels, and encouraging simplification where it is appropriate.

For the MoD, I would also argue that it should resist the temptation to diffuse its core role and stick to what it does best and what it, and only it, can do for the nation; violence, and the deterring of violence, however old fashioned that view might be.

Jim is a risk and resilience practitioner.