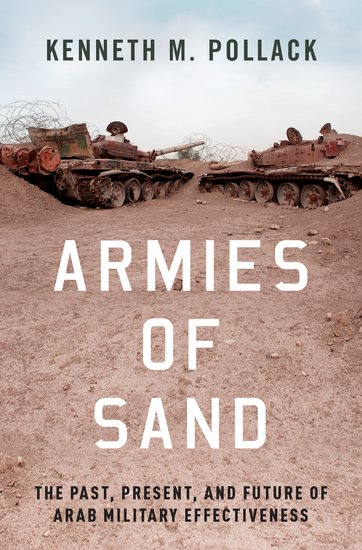 The Past, Present, and Future of Arab Military Effectiveness

Why do Arab armies fail?  There are many common answers to this question, and you may have already formed your own conclusions.  Kenneth Pollack explores this in Armies of Sand, as he confronts and disproves many popular arguments for Arab combat ineffectiveness.  Pollack’s overriding conclusion is that dominant Arab cultural traits are not well suited to warfare in the industrial age, undermining their combat performance.  Yet his argument is nuanced and underpinned by broader themes that create a more complex picture.

Who is the author?

Pollack has over 30 years of experience in the Middle East.  He served with the Central Intelligence Agency and is a Senior Fellow of the Brookings Institution.  Throughout the book he uses this experience to add to his analysis, and draw his deductions through to modern thinking.  This makes the book both a work of history, but also of direct relevance to modern military readers.

What is the argument?

Pollack identifies four general areas to examine and frame his conclusion; a reliance on Soviet doctrine and advisors, the politicisation of Arab armies, economic under-development, and dominant Arab cultural traits.  He develops each of these themes in turn to find nuanced and interlinking reasons underpinning poor combat effectiveness.  Pollack then compares the effectiveness of Arab armies with similar non-Arab case studies to contrast the problems and evidence his argument.

Soviet doctrine. One of the theories Pollack identifies is the idea that Arab armies have historically over-relied on Soviet doctrine and advisors.  Pollack concludes that there is no correlation between Soviet doctrine and Arab ineffectiveness.  He reaches this conclusion by comparing the armies of Cuba and North Korea (both armies heavily influenced by the Soviets) and points to their operational successes.  These case studies show that Soviet doctrine was successful when used elsewhere, and cannot be the key reason behind Arab ineffectiveness.  Nevertheless, Arab armies have been shown to be very effective when implementing scripted attacks based on Soviet doctrine with a reliance on a strong general staff; Egypt’s attacks into the Sinai, for example, demonstrate high combat performance when sufficient time to train was available.

Pollack makes a broader point that people who argue this, however, fundamentally misunderstand Soviet doctrine and have therefore looked for the wrong things when making this argument.  “If anything,” Pollack deduces, “reliance on Soviet methods was probably helpful to Arab militaries”.

Politicalisation.  Pollack identifies three general types of politicalisation: Praetorianism, Commissarism, and Palace Guardianism.  He describes how different Arab leaders have politicised their armies, normally because of concerns over loyalty.  There were 30 military coups between 1949 and 1966, meaning Arab leaders needed to politicise their armies to defend their power.  The example of the Iraqi Army is well known to Western readers, but the picture is not as clear as you might expect.  Levels of politicalisation change over time dependent on the political and military situations.  In addition, Pollack identifies that this is a global theme, and points to the South Vietnamese and Argentinian armies as similarly politicised but able to achieve combat successes beyond that of Arab armies.  Pollack identifies that politicisation did impact Arab armies, but not to the extend that many believe and largely only at senior levels.  He finds that tactical leadership was not overly affected by politics and that it did not, therefore, overly impact their combat effectiveness.

Underdevelopment.  Pollack tests the theory that less developed societies (measured by criteria such as literacy and GDP) will perform less well in combat.  To measure this, Pollack breaks down underdevelopment and relates it to key components of military effectiveness: such as weapon handling, maintenance, engineering, and logistics.  The evidence in this area is more mixed with some Arab armies performing well in some areas, such as engineering and logistics, yet underperforming in others.  Underdevelopment certainly plays a role in degrading combat effectiveness; however, Pollack finds no evidence to suggest it is the primary reason for military failure.  For example, Chad successfully defeated the relatively more developed Libyan Army, showing that other factors are more important when considering this question.

Dominant Arab Culture. Culture is difficult to define, and the subject is marked by a general unwillingness to discuss it for fear of causing offence.  Pollack states upfront that he is not judging Arab culture, and the depth of his research in this goes beyond military sources and deep into anthropology and other literature.  To examine its impact on combat effectiveness, Pollack identifies dominant cultural traits common to the Arab world.  These themes include group and family loyalty and how information is held.  These traits are then correlated against military performance.  It is difficult in a short review to do credit to the depth at which Pollack goes to in this section of his book.

What about non-state forces?

Armies of Sand also considers non-industrial styles of warfare by examining the success of Arab insurgencies.  Contrary to the prevailing view in the West, Pollack concludes that the success of groups such Daesh and Hizballah are underpinned by a combination of factors; but critically, was because they have faced weaker opponents.

Pollack expands on their non-traditional organisation and considers the many strengths this brings.  He argues that ‘the best nonstate militaries achieved greater military effectiveness by finding ways to mitigate or eliminate the problematic influences of Arab culture”.  The example is provided of the failures of multiple non-state groups, which showed the same trends of ineffectiveness as state armies.

The overriding conclusion Pollack draws is that culture is the primary reason for Arab combat ineffectiveness.  Pollack does not judge this and is clear that this does not mean that Arab culture is flawed.  Indeed, he points to many positive examples of success because of dominant cultural traits through history and considers how they may be exploiting in the information age.

What is the methodology?

It is also worth considering the methodology that Pollack uses to reach his conclusions.  Pollack compares similar Arab and non-Arab armies to find correlations (or not) of military problems.  To some, this means that Pollack’s deductions can seem shallow or lack evidence.  Correlation is not causation, after all.  And neither does similarity mean things are the same potentially weakening his conclusions.  Others have pointed out that parts of his analysis, in this case education before 1967, do not hold water because of the data used.  However, Pollack addresses this upfront and says he does not present the full depth of his research in Armies of Sand.  Rather, he is presenting a broad, over a deep, study.  Indeed, definitive conclusions about culture are probably impossible to reach and Pollack understands this and discusses it in his work.

In addition, data is often difficult to collate and compare potential leading some to question his research methods. Pollack accepts this and notes the differences where he finds them, he explores and explains what they mean.  This never creates the gap in analysis that has been suggested.  For all the shortfalls, Pollack is drawing on general comparisons of social data and then relating to military effectiveness.  Pollack is quick to agree that correlation is not causation and does not seek to decisively prove all points.  His is not a social study, rather, it draws the themes into the military realm.

Armies of Sand is an excellent book if you want to know why Arab armies have a poor record of combat performance.  It gives a broad context and identifies dominant reasons in the literature as to why Arab forces may fail.  His explorations of how politics has effected military effectiveness spans the tactical to strategic and he deals with broader social issues and economics.  This creates a solid base of evidence and analysis from which to discuss military performance.  By comparing Arab forces to non-Arab forces Pollack is able to demonstrate this argument and he pins it firmly in the military realm.  This gives the book a feel of credibility and depth.  As such, Armies of Sand is a must read for anyone with an interest in Arab armies and how they might develop in the future.