The Enablers move up

Small pieces of coral glint in the gravel of the meandering jungle road. These flashes of light momentarily reflect tropical rays that seep through the intertwined foliage into the green canyon. Something moves behind a particularly dense leafy wall. The faint whine of electric motors mixes with the crackling and swishing of small trees and bushes as they are crushed. The whining motor noises draw closer. Suddenly, like a drawbridge lowering out of the jungle, a panel of foliage descends in a cloud of sharp smelling sap, bark and leaves, pushed by an angled dozer blade at waist height. A bulky van-sized tank-like machine with a low squashed looking turret emerges.

The squat vehicle lurches and slips down into the drainage ditch, then up onto the raised jungle road surface. Rubber tracks skid for purchase in the soft wet soil until they grip the compacted gravel. Ruts squeeze up under the inside track as the squat machine turns and advances along the rough gravel road. A second vehicle closely follows and then another. The three vehicles accelerate, spraying mud from their tracks.

Ahead of them, squatting on long spiky wire legs in the grass beside the road, a Reccedrone6 quad-copter has been waiting for them since coming ashore with the first landing wave. The pastel green coloured foam strips that are stuck to its shrouds merge well with the spiky grass. Hours of unblinking sentry duty end as it hums and lifts off the ground to become a hovering scout. It flies ahead of the convoy that is moving like a single but weird pulsing organism. To confound any waiting weapons ballistic solution, distance-keeping sensor navigation cause the vehicles to erratically swerve and constantly change speed. While there is no one in the lead vehicle to care, soldiers in the other two vehicles are bounced against their harnesses, as if they are on a wild nauseating fairground ride.

Shadows fade and the sunlight becomes hazy, filtered by a thickening white cloud. The work of rocket artillery is evident from the smoking pellets that lie in their path. The vehicles race on without slowing and disappear into the cloud of obscurant still moving no more than a few metres apart.

The commander scans tensely between the images on her helmet screen. Where might an ambush come from? There are only a few human-crewed MAVOC and she must minimise risk. The map-like battle management system illuminated on the commander’s helmet screen shows no threats. She sees only blue symbols representing the other troop vehicles and the one drone she has sent up. She prefers an uncluttered picture when moving. Symbols for supporting drones nearby will automatically appear if they detect a possible target. Her eyes flick between the bird’s eye view and a series of constantly switching thermal images from the forward vehicle. Nothing yet.

Strapped in next to the commander is the number one operator. As her body rocks against her harness, she fights the urge to vomit. Her left hand lies loosely draped on the driving override: ready to take over manual control if needed but not expecting to do so until they reach the end of this section, and reach the next hide position. She concentrates on the panorama delivered to her head set by the cameras in the lead vehicle. Her right hand rests tautly on the engagement authoriser, ready to flick the safety cover off the main gun trigger, if needed.

In the settlements that lie ahead, there will be civilians. Smoke screens conceal – and confuse enemies. They also confuse civilians. It will be hard to distinguish a cowering farmer from a crouching fighter, especially with only a thermal view. The number one has already switched on the autonomous less-lethal option. This fires a noisy ‘ring air-foil’ projectile: a streamlined synthetic rubber hoop with aerodynamic properties that allow it to retain velocity but impacts spreading its energy broadly, so reducing penetrating injuries. Any living creature bigger than a cat in their immediate path will trigger engagement and a noisemaking rubber projectile will scream past them just above head height.

The jungle thins. Here, amongst fields and paddies, dotted with small houses, the wind can swirl freely. A warning light flashes to indicate visual-range visibility. The operator turns on the forward fog ejector on the leading vehicle. For a moment the vent spits spray, then the elements heat up and a thick cloud of glycol vapour billows into the slipstream. Flipping between thermal and visual mode, the operator can see in both, and asks the commander: “Boss, time for hot smoke?” – But the commander is already calling: “Fire mission Orange Castle, I confirm Sierra Sierra over location Sutherland Tango Sierra 250 Metres South-east, fire now”. Voice transmission is still faster than trying to input a fire mission on a keypad while moving at 60 km an hour.

The smoke will be fired from several kilometres to the rear, where launchers of a rocket battery are scattered amongst clearings in the thick jungle. In the single inhabited platform of the artillery battery, a variant of the 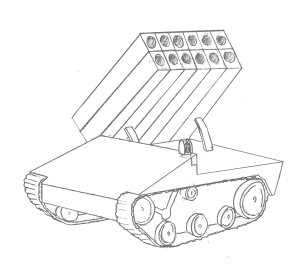 MAVOC, the crew hear the message, and sit forwards in their seats. Their hands reach for the control screens ready to take over. They watch for signals that indicate Home Control in Darwin has heard the commander’s instructions to fire. A few seconds later they relax as the confirmation tone sounds, only briefly preceding the roar of rockets launching. Even from inside their closed down vehicle, the soldiers can hear two successive ripples of six rockets from the nearest launcher.

The heat signature from the rockets is massive and the now unmasked launch vehicle must immediately move. On the screen in the command vehicle, an ‘authorise relocation’ indicator flashes and the commander touches it to give consent and assign control back to Darwin. A distant artillery operator will continue to supervise the rocket-launching vehicle as its AI moves it to its next pre-planned position. This default in favour of using satellite links minimises data load on the mesh net.

In the few seconds that the launch motors burn they propel six smoke rockets that travel more than a kilometre, reaching trans-sonic velocity. The long thin tubes pass over the three vehicle-convoy before arriving in the air above the village. Drogue chutes pop, abruptly slowing the projectiles and a shower of hundreds of smoking pellets scatter forward, each pellet spiralling downwards on little wing. The pellets scatter across the village below. The next volley of six rockets travel a moment longer before similarly slowing. What happens next is spectacularly different. This time the pellets burn with an intense bright light that is reflected in a cloud of glittering metal flakes. The billowing hot white smoke quickly obscures everything.

On the ground, the MAVOC’s slow as they enter the village. Their passage stirs the wafting plumes of smoke being generated by the more benign fibre pellets. A shared electronic brain instructs the platforms to follow each other without hesitation down a side street towards an industrial building. They halt alongside the large doors of a mechanical workshop, a site chosen by analysing satellite imagery: no activity here for several weeks. Even more assurance is provided by the ‘dead bird’ sensor stuck in a nearby roof gutter. Its movement-operated camera has been watching and staring – but dormant until the moment the vehicles drove into its field of view. Yet the soldiers must be sure. The commander turns the less lethal fire control switch to manual operation and calls “ground team out”.

The doors of the rear two vehicles swing through 90°. Weapons at the ready, one soldier steps out of the command vehicle and three soldiers quickly step from the one behind it. They crouch down and pause. They wait momentarily as their integrated vision system stops trying to find a visible light image, settles and gives them a clear thermal picture that sees through the smoke. Satisfied, a soldier at the rear gives a soft whistle and a large dog springs from the second vehicle onto the mud and gravel. The handler moves out, working systematically to check the chosen hide building and those immediately around it. The human and dog team has practiced this often, and the handler knows that through the smoke cloud the two dismounted sentries and the still mounted crews inside the vehicles 30

are intently scanning their surroundings ready to respond to any threat. The dog doesn’t like glycol much and is happier indoors where it works the building’s interiors quickly. As expected, the complex is abandoned. One of the other soldiers takes a cutting tool from a vehicle, cuts the locking hasps away and opens the steel door.

Within a few minutes the two crewed vehicles are set up inside, at opposite ends of the building. The third crewless platform is deployed nearby to a patch of grubby bushes that normally serves as the villages waste dump. It waits under its self-erected camouflage umbrella. The steel door to the building is now closed again. Only close inspection will show the hasp is cut, and the mud trail left by the tracks leading into the building has been brushed clean. Just inside the door, the command vehicle is closed down, ready to run the battle – as well as control the weapons on the now uncrewed second vehicle. If necessary either vehicle can fire blind from inside the building against outside targets detected by a remote camera. A frangible round is already loaded in the cannon on both vehicles, ready to smash an instant firing port through the concrete block walls.

Thin, hardly visible, fibre-optic cables lead from the vehicles inside to a multidirectional camera that has been tossed on the roof of the building. The calculation for the offset between the camera and the two vehicles’ weapon stations is already stored in the fire control system. Another cable runs to a satellite dish a hundred metres away, and the third to where the support team have established the security position. The commander is content to only use a few local sensors, every camera she positions represents something that might be spotted, and she is getting a good picture from the network. Above all, she is confident in the dog’s capability to detect people or deter a curious child.