Across the airbase and the town, the little gliders keep randomly coming. They are like lethal mosquitoes faintly heard circling somewhere unseen in a dark tropical garden. When a glider approaches, passing over still illuminated streetlights or airfield perimeter lights, it is a bright spec, like a moth caught in a spotlight for an instant. The fluttering hiss of their jinking flight is only distinct in the final moments, the last hundred metres of its approach. An observer only has enough time to look up before the little flying fish slams into a building and explodes.

When a glider impacts, the annular linear shaped charge in its nose section detonates. The unevenness of the immense gas pressures deform and project a ring of copper at extreme velocity, punching a hole through block walls or roof panels. A tube with three stacked rubber shielded munitions follows through. As it splays open and decelerates it ejects these ‘Cyclops’ munitions and they tumble to the ground. After a delay of only a few seconds the three small cylinders stir and raise themselves to the vertical, pushed by wires that rotate out from their bases. As this happens tiny ultrawide lenses of lowlight cameras emerge from their tops. As the cameras scan in all directions their microprocessors quickly build a picture of the surroundings. The munitions self-calibrate so that they will only alert and transmit when a seismic or visual signature suggests human presence. Data signals from the devices inside buildings only have to reach the rebroadcast unit in the debris of the tail lying somewhere outside. Missions never stop ‘listening’ for the coded command to detonate their fragmentation warheads. The command can come from any authorised human – including those watching intently from Darwin.

The nature and purpose of attack is initially unclear to the Echthros, although high-speed missiles from the jet UAV destroy two more of the CAD systems that are positioned in sandbag bunkers in the open airbase. Insight comes the hard way. A senior commander observes the strike on one of the buildings on the airfield and orders a patrol to investigate the damage. As they run across the concrete toward the building, far away in Darwin, the operator is alerted when the seismic detectors register approaching footfalls and put the Cyclops into alarm condition. Oblivious to the danger, when they open the door, camera software on the three munitions detects light level change and movement. The munition cameras transmit a 360° compressed picture of the building interior to their remote operator. One camera shows only a blur – it is obstructed, or the munition is lying on its side, but the panoramic circular display from the other two shows the hanger interior sharply. The operator waits until the distorted green tinged picture shows the unmistakable shape of an AK type rifle held by the Echthos marine leaning over the munition. Once identified the munition is detonated. The other functioning munition, unnoticed, continues to transmit the scene of initial mayhem, chaos echoed by the flurry of transmissions on the big enemy activity screen. The circle on the remote operator’s display shows more Echthros Marines rushing into the building to carry away wounded comrades. At home control the legal officer who now stands beside the operator nods with approval at the operator’s reticence in deciding not to attack the casualty evacuation team.

Across the island and beyond its shores, nonhuman creatures are stirring in the night. Back where the forest begins to thin, but behind the line of smaller observing UGV, the big box on the back of a bulkier sibling tilts upwards towards clear night sky. Panels open up, exposing rows of shelves on which multirotor big and small drones squat. From within the box there is an electrical whining noise, then a bumping sound as a first drone vibrates on the shelf in the recirculated air. It suddenly shoots upwards and outwards over the trees. At intervals of no more than a couple of seconds each of the quad copters and micro-drones housed in the box hum upwards and then purposefully head off towards the town. They fly, just skimming the treetops.

While the gliders continue to swish out of darkness to lay their staring lethal eggs within the town, the box launched UAVs deploy across its outskirts. They are undisturbed, but some do some disturbing. Two Reccedrone7s 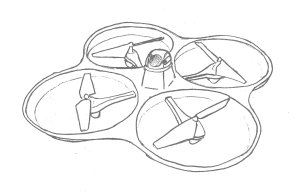 with high-performance loudspeakers fly in a circular pattern low over the town. They alternate broadcasts of the Filia national anthem and a warning in Filia to stay indoors for safety. One of several similar drones sent over the Echthros positions survives CUAS cannon fire and lodges on a roof near their headquarters. From there it loudly screeches what purport to be messages from the great leader, imploring the heroic Marines to sacrifice their lives dearly.

While the loudspeaker messaging has propaganda and conforms to international humanitarian law requirements, it achieves a higher tactical purpose. It distracts and masks the sound of sensors being emplaced. Dropdrone4s make their staccato way to drop ‘dead bird’ sensors on rooftops, while

Perchdrone1’s , small tricopters weighing less than a kilo and assembled of lightweight foam blocks to look conspicuous in urban area, fly to other nodes where they glue themselves to vertical walls. As each drone reaches its observation position under AI control, the system makes a quick assessment of whether their view is fit for purpose. If there is any doubt, they briefly transmit the image back to Darwin, prompting occasional human intervention to adjust a UAV’s position. All drones then revert to passive mode, lurking and watching. The featherweight camouflage materials adhered to their plastic bodies cannot fully conceal them, but it makes them indistinct and ambiguous. There is another subtle aspect to the camouflage. It is overprinted with a mythical creature, a symbol that any local Filia will recognise as a regional cultural icon, and therefore infer its ownership.

Out to sea, other craft approach. Cruising in the gentle bouncy motion of ground effect, the little armada of WIG transport vehicles, released earlier by the ship further out to sea, skim towards the island. Far from the airbase base, an Echthros sentry at a lonely beach observation point hears a distant hum out to sea. He looks casually into the sky, expecting to see another resupply aircraft on final approach, and is puzzled to see nothing. Then his eyes are drawn by a strange brokenness on the black line of the horizon. Puzzled he looks harder. The sound of the approaching craft wells up and he begins to perceive a line of bat-like shapes along the horizon. They look like a fantastic Halloween streamer. In a moment of horrified apprehension he realises their size, and that they are heading almost straight towards him, the shore, and the tropical wall of trees immediately behind him. They are surely rushing headlong to their and his destruction on the forest edge. Behind each, he sees the blue glow of jet efflux at maximum power. The sentry’s adrenaline surges, as one of the black silhouettes becomes plane-like and pitches sharply upwards. It passes over his head and the treetops, with the climbing manoeuvre delayed beyond the nerve of any human pilot. The other black silhouettes equally suddenly transform into strange planes, each passing over the sentries head, travelling inland.

A human pilot watching would wonder even more at the strange flight path of the now dispersing craft. The sharp pitch up each takes has turned velocity into altitude, but the wing to mass ratio is insufficient for continued flight out of ground effect with reducing airspeed over the wings. As speed drops the crafts’ altitude flying just above the treetops doesn’t change, but their noses rise up, increasing both lift from and drag over their wings -that begin to shudder. Reminiscent of bizarre performances of stalled flight at Russian airshows, these strange aircraft fly at seemingly impossible angles, their jet exhaust now visible as a glowing blue cloud beneath them. Water injectors provide a final thrust boost. As they hang in the air, slowed to what seems like a walking pace, a column of fabric ejaculates from their noses. The fabric catches the air and billows into a parachute that jerks the craft to a halt hanging at 45°. The engines cut and quieten with a final cloud of fire dampening steam. The air vehicles descend, airbags billowing from their bellies.

As each craft drops into clearings or patches of open ground, the belly airbags burst as it hits the ground most of the momentum absorbing. Before the flexible wings have even stopped quivering, and as crushed foliage is still springing back, a detonation shears off the nose. A cargo bay is exposed and the nose of a MAVOC 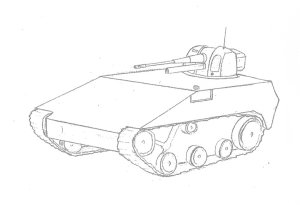 is visible amongst packing material. From within the landed craft there are further small explosions as shackles are sheared and a ramp drops. With an electrical whine the armoured vehicle rolls out of its cocoon, crushing bushes and small trees. These armoured vehicles move swiftly off away from the clearings to find thicker foliage as cover in the surrounding jungle.

Thanks to Electro Optic Systems for helping create this content.