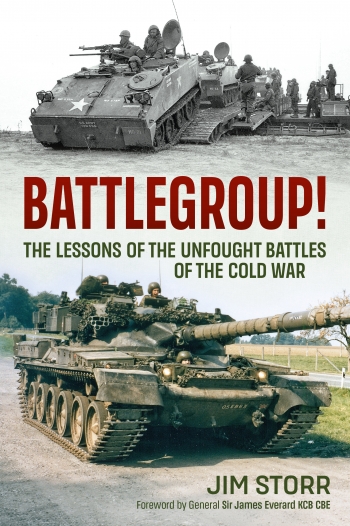 Available here from Helion and Company.

Jim Storr is back.  Battlegroup! examines the tactical level of the Cold War and asks what we can learn from the unfought battles of Eastern Europe.  If you’ve read any of Storr’s work before, you’ll know what to expect.  For those of you who haven’t, Storr has a relentless focus on evidence and ‘warfare’; how battles are fought.  In the book’s forward, General Sir James Everard comments on Storrs ‘meticulous detail’ and this rings true throughout his analysis.  Battlegroup! isn’t a generalist look at ‘war’.  It is an analysis of fighting.

Battlegroup! is split into four major sections which contain interlocking arguments.  Section one looks at the strategic and operational setting of the 1980s Cold War.  Storr details the armies and how they were shaped.  Section two examines the components of land forces, how they are organised, and how they wanted to fight.  Section three looks at battlegroup tactics and draws conclusions about what might have happened.  The last section draws the themes together to look at what lessons might be drawn.

The bottom line up front of this review is that any serious land professional must read Battlegroup!  Storr forces a reader to think about the mechanics of warfare differently, to consider evidence, what doctrine really means, and why things are the way they are.  As Storr says in his introduction, whilst lots has been written about the Cold War, very little has been written about how a battle would have been fought.  Battlegroup! fills this gap offering tactical insights.  It’s a brilliant book.

Storr’s range of doctrine, primary sources, and experience adds credibility to Battlegroup!  He leans heavily on German Second World War writing.  The two most commonly cited books are Tactics of the Russian Campaign and Handbook of Tactics with Lieutenant Colonel Eike Middeldorf as the lead writer.  These two texts focus on German tactics against the Soviet Union.  Storr identifies that the Wehemact had, and the Bundesweht inherited, a ‘far deeper and more perceptive understanding of tactics than the Western Allies’.   By this, he really means that the Germans actually study tactics.  That deduction alone should send alarm bells across modern doctrine writers.

It would be easy (lazy, perhaps) to critique Storr for being too dependent on these Second World War insights, but he doesn’t shy away from updating or disagreeing with different doctrinal ideas.  Reading these views takes an English speaking reader away from their traditional comfort zones offering different insights.

Secondly, Storr relies heavily on wargaming.  In describing his approach he lays out arguments both for and against wargaming.  He concludes that it must be done seriously to have any value.  He then describes his personal experience of 202 battle war games played over 30 years and the deductions they generated.  These games were generally up to battlegroup level and underpin Storr’s analysis of wider sources.  A secondary theme throughout Battlegroup! is a reminder of just how powerful wargaming is in generating professional knowledge.  A purest academic might discount wargaming, and Storr’s own military experience, as undermining his assessment of the evidence.  Whilst it’s impossible to verify his gaming, his personal experiences and ability to bring the deductions to life add a ring of credibility when he draws his more cutting deductions.  After all, the battles Storr is analysing never happened.

To give you a feel for how these strands fall together, let’s consider infantry fighting vehicles.  Any British Army soldier will have a view on the utility of turreted and tracked vehicles.  The cancellation of the British Army’s Warrior fighting vehicle in 2021 has made the modern debate somewhat emotional.  Storr’s conclusion, however, is that they ‘are a bad idea’.  They would get infantrymen killed for ‘little or no gain’.  Storr is quick to accept that many find them ‘useful’ but points out that no modern soldier has had to attack even a moderately well prepared defensive position in them.  Looking at infantry fighting vehicles in the defensive, Storr concludes that they are ‘hostage to fortune’.  Whilst cannon and anti tank missiles are effective, they just aren’t when mounted on infantry fighting vehicles.  In this example he draws together wargaming and practical experience to challenge any bias you might have.

Battlegroup! doesn’t, however, only focus on combat arms.  There is a significant amount of detail on engineering, logistics, medical, and other supporting arms.  A more traditional analysis of Cold War combat looks at headline equipment capabilities.  Storrs dives into the detail about fuel and ammunition consumption.  For example, German Leopard 2 tanks consume 58% less fuel than American Abrams.  What are the battlefield consequences of that for the size of a division?  Have you ever stopped to consider the cost of this in peacetime and how the savings may be better spent?  Storr does.  In another fresh twist, he also considers how delays in providing combat replacement soldiers affects combat and creates inefficiencies in battlegroups.  It’s impressively deep and comprehensive.

Storr also draws different conclusions about the use of close air support.  A contemporary NATO officer is likely to believe in the utility of close air support and that air mobility operations won’t work against peer opponents.  His combination of German doctrine and wargaming draws him to the conclusion that ‘air attack has often been dramatic but ineffective… it has limited effect on battlegroup operations’.  This is a conclusion that many readers will disagree with; but as mentioned above, Storr’s logic will pull apart your beliefs with no sympathy for them.  Believers in air mobility are likely to be triggered by Storr’s assessments in their utility.

Another example of Storr turning traditional narratives is his analysis of urban warfare.  Storr critiques a narrative of urban warfare written by attackers and telling of slow and chaotic attacks with high casualties.  But there is little evidence for this, or for our current understanding of urban strong points and the weaponry needed for success.  Quoting the research of David Rowland, Storr notes it was published in the Journal of the Operational Research Society concluding ‘I doubt whether any historian has read it’.  Our existing understanding is ‘simply wrong’.1  Storr forces a reader to consider evidence in a way that modern military thinking, and professional training does not.

These themes are tied together in Battlegroup! and evidence his core argument that shock, surprise, and exploitation are key to success in land warfare.

Why should you read Battlegroup!?

It’s difficult to do justice to the range and depth of Battlegroup!  The book is outstanding.  It ranges from Army structures to platoon tactics, from offensive to defensive, fighting in woods to fighting in towns.  All are convincingly blended to challenge any preconceptions you may have about conventional warfare.

You’d be right to finish reading it and question why you don’t already understand warfare from this perspective.  It certainly made me look at British doctrine and warfare development differently.

However, the quality of this book is such that it needs a stronger recommendation.  I agree with General James Everard who writes in the forward “he is a joy to read, and in Battlegroup!  He has again spun a web of rich discovery”.

What Russia wants – and what it means for Britain