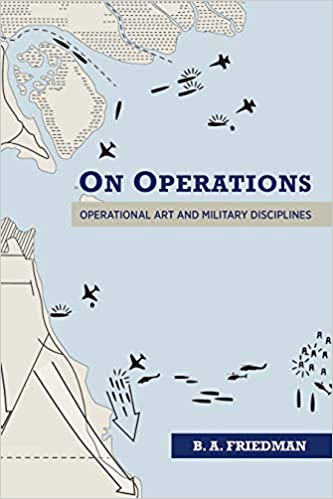 “Operations – the discipline responsible for the employment and coordination of combat forces across time and space.”1

In the words of the author “If you’re looking for something non-Clausewitzian, this is not it”.  No hidden agenda here, Friedman nails his colours to the mast as early as page 1, line 8 of a 200-page book.  Leaving Clausewitz to one side, Friedman has probably just written the book on operations that you never thought you needed.  It may be on a subject not on everyone’s shopping list, but for those with an interest in military operations, this needs to be on your bookshelf.

This is a well written and engaging work that dissects and analyses the operational discipline.  It champions operational art as the rightful bridge between tactics and strategy and is the second book in Friedman’s ‘tactics to strategy’ trilogy.  On Tactics (2017) focussed on Commanders and success on the battlefield.  On Operations has the staff officer at its heart; those charged with supporting commanders by “performing the functions of operational art”.  Friedman’s view is that Napoleon was the first to give his professional staff officers the task of bringing operational art to life, and it is a responsibility that endures, or should endure, in today’s military.

Friedman does a good job at taking the reader through the rather complicated 200-year journey of operations, operational art as well as his nemesis, the operational level.  Whilst Friedman insists this is not a history book, he does not shy away from a generous helping of historical vignettes that examine the French, German, and Soviet approaches.  Friedman’s analysis of the Soviet approach is pivotal; the American military would misinterpret their writings and seize upon the term ‘the operational level’ as the doctrinal silver bullet to solve the problem of the greater scale and complexity of modern wars.  For readers who need remedial doctrine lessons, as far as the United Kingdom is concerned, the operational level is defined as where “campaigns and major operations are planned, conducted and sustained in order to accomplish strategic objectives”.2

There is a lot of detail in certain sections of the book that Friedman uses to support his argument.  The heavy lifting falls to chapters 14 and 15, where we are offered a campaign taxonomy designed to allow the operational staff to properly understand the nature of a campaign.  On Operations does feel a little doctrine-lite at times, but stick with it.  Friedman is at pains to stress that his proposals are aimed at organisational issues and that this book is a tool for greater clarity – mission accomplished in my view.

The final chapters consist of a series of historical case studies that demonstrate Friedman’s approach to operations; the type of operation they conducted and how each protagonist fared across the range of operational disciplines.  Although some case studies, such as Austerlitz and Guadalcanal work well, the inclusion of the Battle of Britain does feel somewhat forced.  Nevertheless, these final 60 pages are an excellent way of bringing the work to a conclusion.

Whilst this is clearly not a novel, Friedman has incorporated a gripping storyline, where the two protagonists, operational art and the operational level, vie for the right to occupy the conceptual space between tactics and strategy.

Not only does operational art win the day, it is ordained as the rightful link between tactics and strategy.  This may seem an anathema to any staff college graduate who will have studied the operational level, but Friedman is an avid critic of the latter and blames the West’s fixation on the operational level on its inability to translate tactical success into strategic effect.

We are back to history again.  It is the US military’s misinterpretation of the Soviet vision of operations and inserting the term operational level into its own doctrine, without fully understanding its true meaning or the context, that has led to what Murray and Millet refer to as ‘the amputation of strategy from tactics’.

Friedman also cites the arrival of, and Paret’s and Howard’s 1976 translation of, Clausewitz’s On War as what could be considered the operational level’s breakthrough moment.  The translation inserts the words ‘operations’ and ‘operational’ in numerous places, yet as Friedman points out, Clausewitz himself never actually used these terms.  Unfortunately for Friedman, that 1976 translation has become the source document for academics and the military alike and by 1982, the US Army’s Field Manual 100-5 had officially introduced the term into its doctrinal lexicon.

Friedman acknowledges that the “resultant Frankenstein Monster” has proved difficult to kill.  At times it is as if he is channelling Clausewitz’s ghost as he seeks out those that would misinterpret On War and introduce ‘new world’ concepts.  In taking on the operational level, Friedman appears to have accepted a challenge akin to trying to free the container ship Ever Given from the Suez Canal using a JCB digger.

The premise of On Operations should strike an uncomfortable note with many.  The gap between tactics and strategy, filled as it is at present by the all too convenient concept of the operational level, has led to outcomes in Iraq and Afghanistan of which the British Military, and its population, are only too aware.

The doctrinal establishment may look upon Friedman’s views as nothing more than quixotic, but they would be wrong to ignore them.  On Operations is a valuable work for those wanting to learn more about the discipline and those that want to challenge the status quo.  Highly recommended. 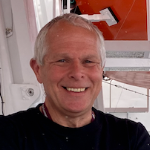