Automation and Technology Concepts and Doctrine

Putin has a one-two-three tactic to subdue Ukraine. The first blow silences, takes people’s voice, destroying mobile phone towers, cutting off communications. Then, when no-one can hear the screams, the starvation – a slow constriction through sieges. And finally savagery – indiscriminate murder, collective punishments, perhaps genocide. Today, Mariupol’s citizens and Ukraine’s soldiers are besieged and starved. Tomorrow, as urban warfare expert Professor Anthony King observes, it will likely be Sloviank, Severdonetsk and Kramatorsk – cities of 100,000. But there is a counter: drones can provide 3G internet and cell phone access into areas where Putin would deny it. Drones – uncrewed aircraft – can keep aid moving. A 21st century Berlin airlift would deploy drones to stop silence and starvation being used as weapons. A one-two parry to protect Ukrainians as best we can.

Last month, a Russian volunteer with the Ukrainian Armed Forces, Artyom Shirobokov, sent a series of texts to a Ukrainian MP – who subsequently shared them on Twitter. Shirobokov had just passed through Bucha and the commuter towns north of Kyiv, areas where evidence of war crimes was uncovered on their liberation at the end of last month..

He wrote: “If, in Kherson and Melitopol, people hurl themselves against Russian tanks and come out to protest, it’s because they still have communications. In the small towns [around Bucha], where there is no mobile communications and no internet, everything looks completely different. Civilians are shot. Just for fun. For pleasure. I was led down a street…littered with the corpses of grandmas and grandpas.”

First Chernihiv, Kharkiv, Kherson, along the Black Sea coast, then Mariupol. Then Trostyanets, Bucha, Irpin. What Shirobokov witnessed in and around Bucha is happening all across Ukraine. First, cell phone towers are destroyed, cutting communications. Then, if the city falls, savagery immediately. If it holds, sieges and starvation. The attacks to cut off communications are deliberate. What Shirobokov and Ukraine are witnessing are Russian tactics seen in Chechnya and Syria deployed again.

In Mariupol, residents are reported to be drinking water from radiators and killing pets for food. The Head of the UN’s World Food Program, David Beasley, describes how people are being starved to death in the city and that, in Mariupol and across across Ukraine he ‘doesn’t see any of that easing up’. In Bucha, as Ukrainian forces retook the town they found streets littered with bodies, mass graves, evidence of appalling atrocities. Three days before, an aid convoy organised by the International Committee of the Red Cross was forced to turn back from Mariupol despite having previously been assured of access. The Red Cross’ neutrality means they can’t say so, but it is almost certain it was Russia that prevented access, given they are the ones besieging the city. Some reports suggest the aid convoys were looted by Russian troops at the checkpoint from which they were eventually turned back. Aid agencies were said to have low hopes of gaining access after several failed attempts.

Even when sieges ease, the suffering may not. The UK’s Defence Intelligence reports that Ukraine’s infrastructure and Russian mining of roads in the retreat presents ‘a significant challenge in delivering humanitarian aid to areas formerly besieged by Russia’ with, for example, the city of Chernihiv, once home to 280,000 people, inaccessible by road.

That 1-2-3 tactic, silence, sieges and savagery, is widespread and deliberate.

It needs a deliberate response. A one-two parry can help. First, uncrewed cargo aircraft can take aid into areas under siege. There are mature solutions in operation around the world that could be operating within days if the global political will was there. Take AeroEnvironment’s T20. It has flown many hours globally with the US military. Working with the T20’s former manufacturer, Arcturus UAV, 2015-18, Airbridge Aviation showed that just ten aircraft, operating at ranges of 100nm, lifting 30kgs each, and operating for just 10 hours each day, could deliver >2 tons of aid a day – air dropping it to the point of need. Flying the heavier FlyOx1, two aircraft operating at 300nm could air drop c.11,000kgs/1.1 tons of aid per day. Compare these capabilities to the recent UN-organised aid convoy that arrived in Ukraine’s north-eastern city of Sumy. It delivered 130 metrics tonnes of aid, after 3 weeks of negotiation. Just 10 T20s could have achieved this total every 8 days. Two FlyOx1s could do it every 12 days. The T20 has operated in environments where hostile militaries have tried to jam its communications and shoot it down. It is designed to survive. Furthermore, operating at night and with the right flight profile, drones – from Bayraktars to the hobbiest type – have shown just how hard they are to knock out of the sky. Finally, if you are under siege and unable to communicate – wouldn’t you think it worth the risk? After all, a jammed or shot down drone brings no loss of life, but a successful airbridge would save many.

Beyond these solutions, many others exist. During the Syria crisis, General Atomics worked with Airbridge Aviation to show how the Predator C drone could be repurposed and renamed the Angel 1 – swords into ploughshares. Operating as the Angel 1, at 100nm, a single aircraft could deliver >1000kgs of aid per sortie. In 2013 in the UK, BAE Systems converted a Jetstream to be able to be fully uncrewed and proved its capability. In China large numbers of J6s, a MiG-21 variant, have been converted to be fully uncrewed. In 2012 it was reported that DARPA was working to convert the US A10 aircraft to be fully pilotless. Lockheed Martin’s KMax helicopter was operated fully pilotless to deliver supplies in Afghanistan for three years to 2014. These aircraft and programmes show there are many options if we were determined to get aid into Mariupol and other areas under siege. And beyond that, what is stopping us converting C-130s, A400Ms and other cargo aircraft to be optionally uncrewed, thus allowing us to deliver aid into hostile areas without risk to the crew?

Elon Musk’s SpaceX Starlink has provided much-needed satellite internet access via its Low Earth Orbit (LEO) satellite constellation and array of satellite ground stations in nearby NATO countries. It has been described as a ‘lifeline’ by some Ukrainians. However, in its form as-shipped it has limitations: it can provide internet access via its free-standing satellite dish, and  a Wi-Fi hotspot via the attached router for a small radius of users – think of it as being much like your Wi-Fi router at home, running via a TV satellite dish. The dish could be spotted, the router destroyed, and the range is very limited.

Providing cellular network access, including 2-5G internet, can also be done from the air and could extend Wi-Fi access to those areas where Putin is actively denying it. Pico and micro cell technology is available ‘in-a-box’ – typically connecting tens to hundreds of users at ranges up to 2km, although some boast ranges of 15km. Open BTS, used to provide cellular and internet access at the US’ Burning Man festival, has provided coverage to 50,000 users. It’s as small as a shoebox and requires just 50 watts of power to operate, so can be supported by solar, wind or battery power, and provides a max range of 35km. All of these solutions could deployed on an appropriate drone, orbiting to provide cellular coverage and internet access to denied areas. For example, in 2017 US cell phone operator Sprint showed how putting its MagicBox technology on a drone could provide cell phone coverage over 10 square miles. Today such a solution would employ 4G, 5G or 6G, which provides greater security to the user.

There are other solutions. In 2017, the same year as the Sprint demonstration, AT&T flew its ‘Cell-on-Wings’ or COW, a tethered drone that can provide coverage in emergency situations. Tethered solutions are well established, and could be operated by Ukrainian forces or civilians outside an area under siege, perhaps airborne at night to provide cell coverage to those trapped inside. Aerostats – tethered balloons, can provide similar solutions – last year 10 rural counties in Indiana in the United States began getting broadband access that way. AT&T have used them extensively in providing coverage for first responders after disasters. Altaeros’ solutions provide 8,000 square kilometres of internet coverage with just one aerostat. The Department of International Trade-promoted, Belfast-based Buffalo Grid provides solar powered phone and internet access to up to 1000 people. Whether it’s through orbiting drones providing ‘cell-in-a-box’, tethered drones, or aerostats, we can stop Putin silencing Ukrainians.

Ukrainians have won global support simply by showing the truth of the horror they face. Denying them that voice, starving and killing them while they can’t call for help, is a priority for Putin. Countering the tactic should be a priority for us. What we need is a 21st century airlift, like those to Berlin and Sarajevo in the 20th. An Airbridge to provide aid and internet access. A 1-2 of our own to counter Putin’s tactics. 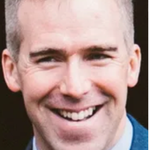 Keith Dear is founder and CEO of Airbridge Aviation, a not-for-profit uncrewed aircraft operator dedicated to ending the use of silence and hunger as weapons. Contact him via airbridge.enquiries@protonmail.com