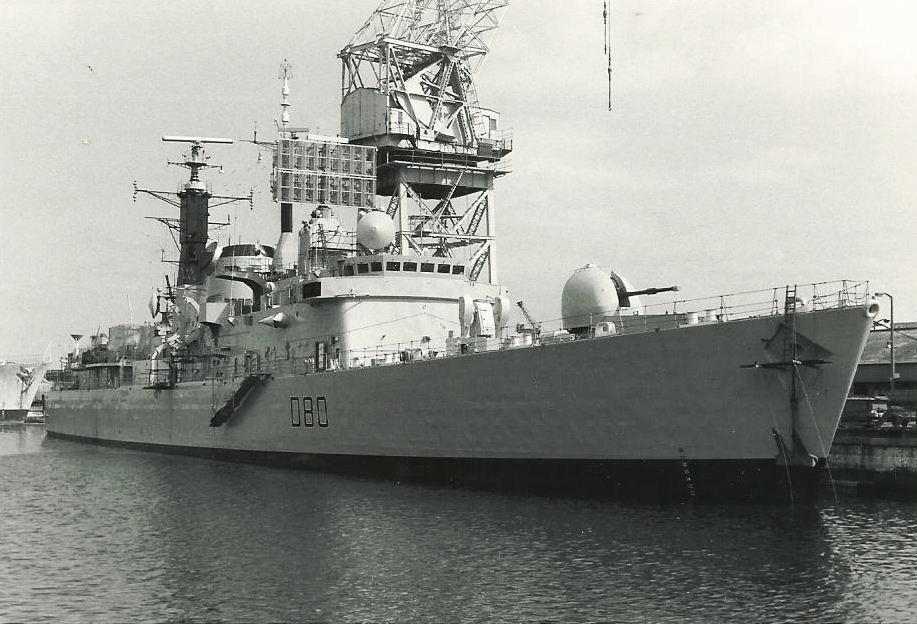 Any expeditionary force is composed of several components. Corbett categorised these as fourfold: the army; the transports and landing flotilla; the escorts; and the covering squadron.1 Molyneux made similar reference to transports, landing force, in-shore flotilla (including the flat-bottomed boats and craft) and the fleet.2. This was as relevant in the falklands as in any conflict. (read the other articles in this series here)

In choosing the location of the covering squadron, in this case the Carrier Task Group (CTG), Corbett is rather prescient. Writing at a time of increasing technological challenge to the existing precepts of littoral operations, sea-mines and torpedoes were adding a new dimension to the offensive-defensive arms race between shore-based emplacements and maritime units.3The threat posed to the ships by these new methods of war was first seen during the Russo-Japanese war, and ‘Their deflective pressure was curious and interesting’.4 Given the requirement of the covering squadron to effect a close blockade of the amphibious objective, thereby isolating it from resupply by sea, the advent of weapons capable of mounting a mobile defence from shore pushed the covering squadron further from the object. This ‘deflective pressure’ was to become a journalistically contentious issue during Operation Corporate.

In 1982, the isolation of the Falklands rested on superiority across two domains: air and sea. In terms of the latter, this was achieved successfully by an addition no available to Corbett: the nuclear-powered attack submarine. Stationed off the Argentine coast, two SSNs (HMS Conqueror and Courageous) maintained a watch over the Argentine navy and used monitoring equipment to report Argentine air sorties. The sinking of ARA Belgrano by Conqueror on 2 May signalled intent to the remaining Argentine naval units and groups, and helped establish the Total Exclusion Zone. Owing to Belgrano’s sinking and the presence of these submarines, the Navy was able to operate unmolested from surface combatants, although the threat from the ARA San Luis diesel submarine was very real.

These considerations, updated by including airborne attack (either by strafing, missile or bomb), surface or subsurface combatant capabilities, including Exocet and shore-based missile defence, all played a part in the choice of San Carlos as the landing zone. It was a geographic location informed by Clapp’s own experience and knowledge as a Buccaneer observer, as the XO of a surface combatant trialling Exocet, and as the COMAW during exercises in the high North. What Clapp was expecting, and ATP 8 dictated, was the establishment of air superiority over the Amphibious Operation Area (AOA). In the event, that superiority was not forthcoming, for several prominent reasons.

The positioning of the Carrier Battle Group (CBG) so far to the east of the Amphibious Operations Area has long been contested. However, Thompson and Clapp’s objective view was that the CBG was correctly positioned if the main objective was to engage the Argentine Air Force and Argentine naval air at their extreme range. If, however, the object was to provide maximum support to the land forces and conduct a close air-blockade of the islands, then being 80 nautical miles or more to the east of the islands was less than optimum, given the limited capabilities of the Sea Harrier. The long transit time from the CBG to the AOA, combined with the lack of air-to-air refuelling and early warning capabilities, meant that the Sea Harriers had limited time on station (just 10 minutes); they could not locate and engage incoming Argentine aircraft significantly up-threat, nor pursue those retreating. Similarly, until a forward operating base was established at San Carlos, the GR3 fleet could only provide limited close air support. Throughout the conflict, the escorts and shipping were continually at risk from Argentine air attack, and all were at pains to remain under the CAP umbrella in day-light hours unless in the enclosed waters of San Carlos. Moreover, Argentine C130’s were able to maintain a near continuous airbridge to the defenders; it was not possible to completely isolate the Islands from the home base.

Similarly, Corbett was at pains to question the role of naval gunfire support5, although the experience in Second World War, Korea and the Falklands, as well as Libya in 2011, have demonstrated its continued (if limited) efficacy. As it was, the rotation of vessels onto the gun-line to variously support operations ashore, either through providing naval gunfire onto prepared Argentine positions prior to or during an assault, or as part of deception plan, was relatively successful. The only significant danger was realised late in the conflict when HMS Glamorgan was struck by an Exocet missile from a jury-rigged truck.6

The limitations of NGS today are very real. A recent Commons Defence Committee report characterised the Navy’s surface combatants as ‘porcupines’ – well-defended herbivores bereft of offensive capability. The 4.5in Mk 8 gun may well be effective, but has limited range, leaving the Navy’s ships vulnerable to shore mounted systems – one need only look at the distant blockade of the Ukrainian littoral and the sinking of the Moskva to see the pertinence of this gap today.

The frigates and destroyers blended the roles of escort and covering squadron, much as Corbett suggested: ‘so essentially is it a single organism, that in practice these various elements can seldom be kept sharply distinct’. So it was in 1982, that the frigates (in particular) were worked to exhaustion:

Sprinting inshore at dusk, evading minefield and shore-battery fire whilst working the gunline, before making a rapid return to ensure being under friendly air cover before first light. But there was no respite upon re-join. Instead, there was the sapping go-around of resupply.7

Resupply was not just limited to the individual vessels amongst the Carrier and Amphibious groups. The frigates and destroyers were also required to escort convoys from the Tug, Repair and Logistic Area (TRALA) into the AOA and vice versa. In 1982, the Navy deployed no fewer than 23 escorts – 4 more than our current order of battle. Whilst there may be arguments over individual capability, the truth of the matter is that a ship cannot split itself between two locations and multiple taskings; something has to give. In ‘82, the frigates and destroyers proved themselves to be the workhorses of the fleet, variously providing point defence for the high-value shipping; CTG, ATG and the logistics flotilla through which the lifeblood of the land forces flowed. The idea that today, in a world of democratised sensor and shooter capabilities, a single frigate can provide sufficient escort to a littoral response group, is frankly wishful thinking.