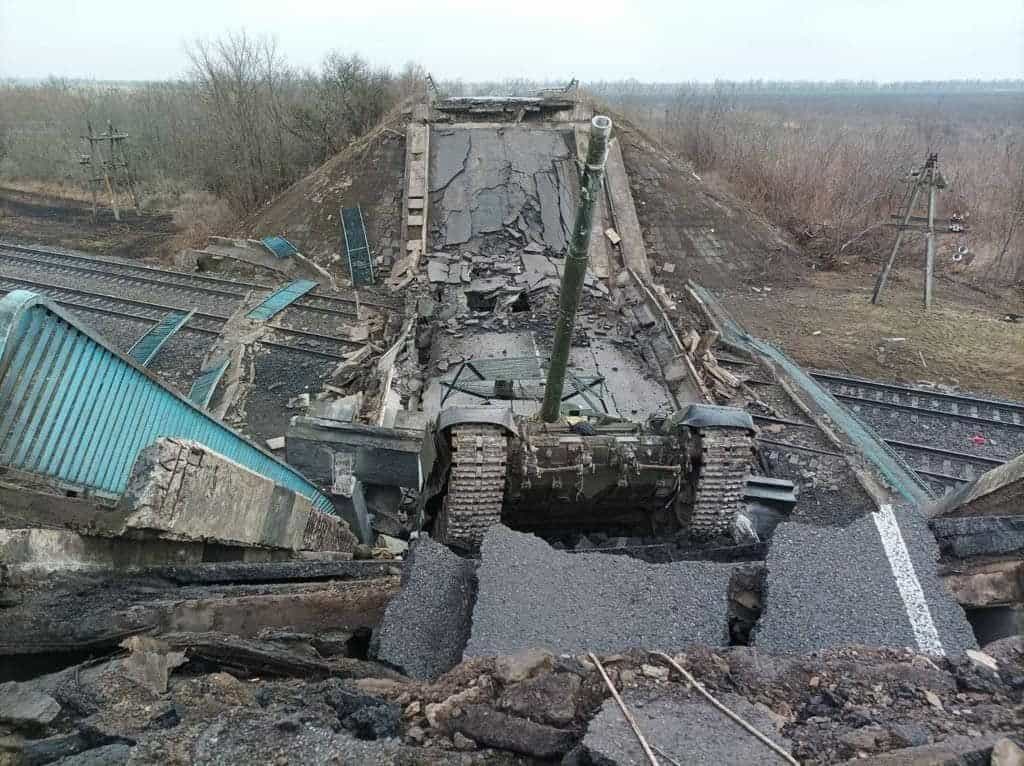 What has happened to the Russian tank fleets?  Ukrainian commander of combined tactical group ‘Adam’ Yevhen Mezhevikin, a twice decorated Hero of Ukraine and People’s Hero of Ukraine, has had a busy war.  In February 2022 he fought against the Russian armoured columns that descended on Kyiv.  His unit then re-deployed to Zhaporizhzhia and was involved in the forlorn hope attempt to open a corridor to Mariupol.  In April he served on the Kharkiv front.  Group ‘Adam’ subsequently fought in the Severodonetsk pocket and today the unit is committed to the contest for Bakhmut.

Mezhevikin offers many interesting observations on a Russian Army he has come to know well.  On the use of armour and combined arms tactics he says:

‘The most extreme massive use of armour was near the Lysychansky Oil Refinery. There they went in battalions for an assault. Tanks, BMP. A lot burned. And here [Bakhmut]… In the last month, we noticed one MTLB that brought ammunition.  It was destroyed… No more equipment was seen. Basically, they use funny cars [assorted customised vehicles]…’

According to Russian defence journal Voennoye Obozreniye (‘Military Review’) the Russian Army fielded around 2,600 operational tanks on the eve of the invasion.  At the time of writing (December 2022), the Oryx database records 1,579 Russian tank combat losses.  921 have been destroyed. 1 24 have been damaged or abandoned.  And as many as 534 tanks have been captured as ‘trophy tanks’, including fourteen T-90 series vehicles now in service with the Ukrainian Army.

Combat losses account for the overwhelming majority of tank losses.  But there is a hidden, non-combat reason why Russian tanks have become scarcer: they are not being used as tanks. Instead, tanks are being used as howitzers to lob shells at Ukrainian positions.  This article explains why this is a problem.

All Russian tanks can fire high-explosive fragmentation shells,  known as OFS shells.  There is a variety of these shells but  a common shell used on T-72 series tanks is the 3VOF36 round matched with the 3OF26 (HE/FRAG-FS) projectile.

These shells are used against fortifications and defensive positions.  Due to the cylindrical shape and design, ‘the largest number of fragments scatters perpendicular (or so) to its axis, therefore, when a projectile hits a surface (the ground, and so on), a significant part of the lethal elements goes either into the ground or up.’  Dependent on angle of incidence, lateral scatter may be as wide as 60 metres. Scatter on the strike angle may be as much as 20 metres.  OFS shells are not considered efficient.

According to Russian military journalist Edward Perov, ‘The author does not have detailed information about the shells consumed by our troops, but even offhand, the consumption of high-explosive ammunition in tank units exceeds the rest of the ammunition ten times, if not more.’

How effective is tank fire in indirect mode?

The use of HE-Frag shells by Russian Tank Troops is not new. Their use was widespread in Afghanistan and the Chechen Wars.  However, employment and effectiveness are not synonymous.  In May 2018, the Russian Army conducted trials at Prudboy training area in Volgograd (the westernmost point held by the trapped German 6th Army in the Battle of Stalingrad).  The results of these trials were examined in the August 2020 edition of the Russian MOD’s house journal Voennaia Mysl’ (‘Military Thought’).  The author of the article ‘Shooting from tanks from closed firing positions, pros and cons’ was AP Edemsky, Candidate of Technical Sciences.

In his introduction Edemsky noted that in WW2 ‘tanks were involved in the artillery preparation of the offensive as a reinforcement of field artillery to increase the fire effect on the enemy before the attack.’  Post-war, instructions for the use of tanks in indirect fire mode appeared in a 1958 manual1 and later in the 1970 ‘Manual on the control of ground artillery fire’2 and 1974 ‘Rules for firing from tanks’.3  Subsequently, the practice was abandoned as ineffective.

However, the practice did not go away (Afghanistan/Chechnya) and ‘a sharp decrease in the fire potential of artillery…a natural result of a decrease in the quantitative composition of artillery’ – fewer guns at least by Russian standards – has encouraged recent resurgence.

The trial at Prudboy attempted to answer the question of effectiveness by testing the best against the best: a battery of 2S19 self-propelled guns against a company of T-90A tanks.  The crews conducted four fire missions, two from static prepared positions and two in dynamic scenarios.  As expected, tank distributions were significant.  In the first trial against targets at medium ranges (not stated, but assumed to be at least 5,000 metres) the tank shells landed in an area measuring 1,750 by 500 metres.  The nearest shell was 100 metres from the target.  Not wishing to test the reader with more detail, all the subsequent shoots displayed the same gross errors.  In Edemsky’s words, ‘Thus, the conducted experimental shooting showed a low efficiency of firing from tanks [bold in the original].’

The problem of barrel wear

Edemsky raises a number of other technical issues relating to tank gun fire in indirect mode and especially notes the question of barrel wear:

‘Another technical issue is the survivability of the gun barrels. According to the technical characteristics, the survivability resource of the tank gun barrel when firing high-explosive fragmentation shells is about one thousand rounds. For modern artillery pieces, this figure is much higher and amounts to 5-7 thousand shots.’

In the last ten months, Russian tanks have likely fired off 100,000s of HE-Frag shells, hitting nothing and wearing down barrels.  In what may be judged another historic design flaw in Russian tanks, barrel changes can only be carried out by removing the turret.  The reader may legitimately question: but isn’t this a problem given manifestly poor equipment support evident in the ‘special military operation’.

The answer is: yes.  In the most recent diatribe from Igor Strelkov (‘Girkin’) – recently returned from a two-month visit to the Donbass – he warns the LPR4 militia is reaching a point where it will have no tanks at all:

‘…the survivability of the barrel of a tank gun, it is much less than that of a rifled howitzer. And the tanks that are doing all this are no longer new, the barrels have already worked well [limited remaining barrel life]… And the guns on the old T-   64/72/80 tanks, the old models of the 2A46 gun, they don’t change without       dismantling the turret. That is, we are now methodically putting out of action the last surviving tanks of the People’s Militia Corps.’

In the summer, all artillery systems were taken away from the militias for the same reason (excessive use leading to barrel wear coupled with lack of resources to carry out barrel changes).  If the situation persists the militias will be without tanks or artillery, or become infantry cannon fodder.

The predicament of the Donbass militias raises questions over the Russian Army tank fleets – Russian crews have been behaving in the same profligate ways.  And suspicious, unexplained puzzles hang over the Russian tanks.  Why has Belarus transferred 122 T-72A tanks to the Russian armed forces?  Why has the Russian MOD reportedly placed a contract to restore to service as many as 800 T-62M tanks?  There are in the order of 7,500 T-72s in storage.  Why are these tanks not withdrawn from storage?  Have the T-72s in storage been cannibalised over many years?  Are spare barrels, in fact, limited?  Can Uralvagonzavod (UVZ) and its subsidiaries meet the demand for new barrels? Or the turret changes that require transporting the tanks 100s of kilometres by rail to equipment repair depots?

Ukrainian commander Yevhen Mezhevikin may not be mistaken. Russian tanks are becoming scarcer.  Stout Ukrainian defence has accounted for the majority of losses.  But Russian misuse of tanks as howitzers may also have resulted in a significant, self-inflicted degradation of the tank fleets.

Should British Battlefield Helicopters be Operated by a Single Service?