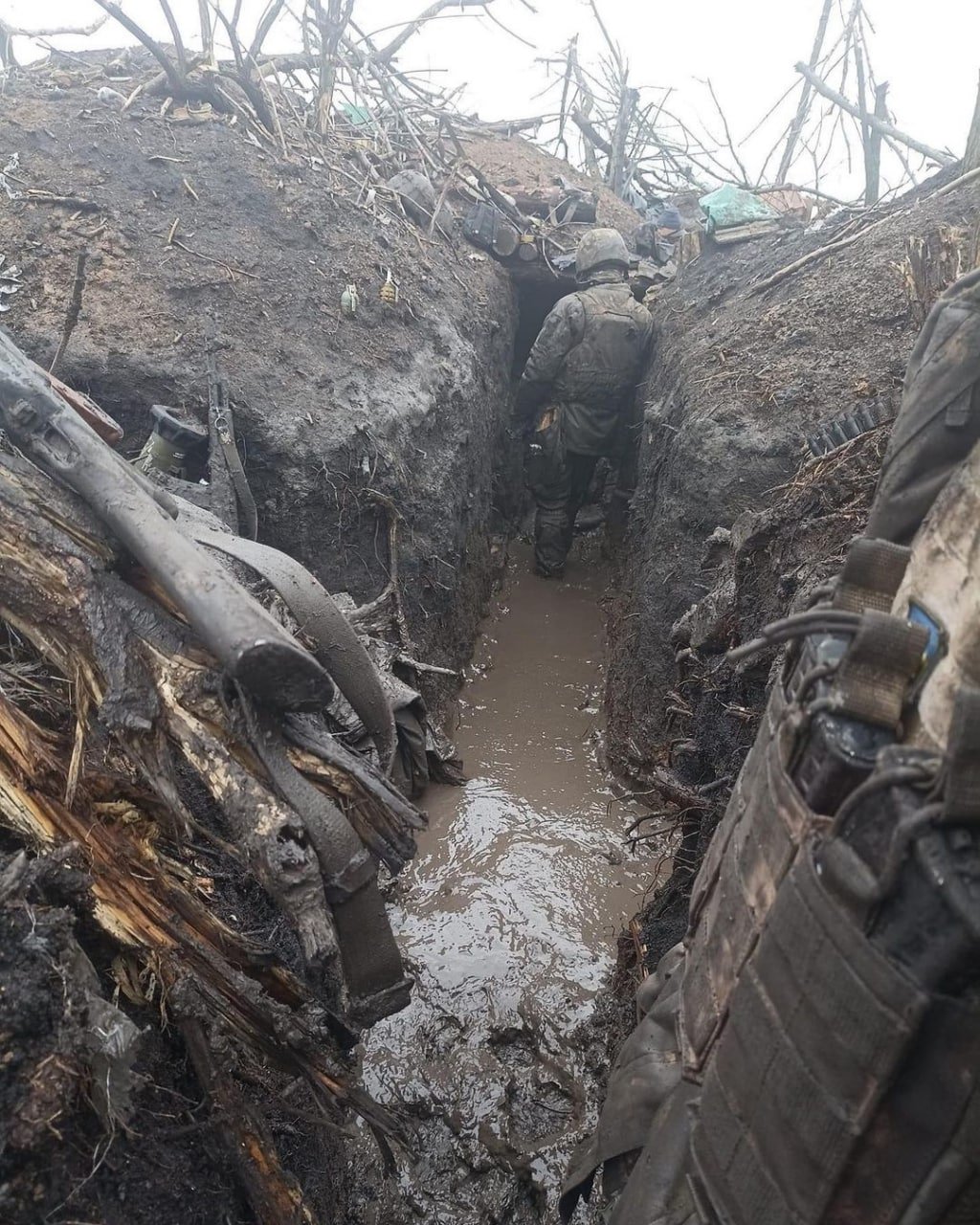 Editors note: this article contains some imagery that readers may find upsetting.

The Battle for Bakhmut has turned into the meat grinder battle of the war.  The Russian offensive began in earnest in May. Seven months later, thousands of soldiers have been killed and wounded on a front where gains are measured in yards.  The Russian obsession with this deserted town defies military logic.  The surrounding area now resembles a World War I landscape.  In the last week alone, according to Ukrainian Deputy Chief of the Main Operational Department, Brigadier General Oleksiy Hromov, there have been 90 assaults against Ukrainian positions.

Censor.net staff writer Yuri Butusov has recently written an insightful analysis on Wagner trench warfare tactics on the Bakhmut front.   According to Butusov, Wagner is both more effective and more wasteful a force than the Russian Army.  The reader may judge whether ‘effectiveness’ is drained of meaning in actions little different to the many pointless attacks on the Western Front.  Nonetheless, there is some value in understanding tactics employed by Wagner.  This article summarises Butusov’s lengthy analysis.

Wagner uses convicts with minimal training or even military experience.  The volunteers receive as little as three weeks training.  In Butusov’s words: ‘It should be recognized as an advantage of “Wagner” that the PMK command plans combat operations taking into account the real capabilities of its personnel.  The tasks are set as primitive as possible.’  This is one of the main factors for ‘success’, albeit success is relative when the cost is hundreds of casualties.

Battle plans (effectively assault approach routes and axes) are planned on tablets using navigation programmes and Google Earth views.  ‘Different colours identify different assault groups.  Each group has its own route and determination of where each fighter in each of the assault groups should be…the leaders receive the programme of their attack, and how he and each of his fighters should move through the points.  That is, you don’t need to think, you need to check the movement of your group on a tablet or smartphone.’

The short range of these communications necessarily limits the size of attacks.  This observation may also be made of the Russian Army.  The chief reason why YouTube is saturated with videos showing small unit actions but not battalion actions is constraints imposed by Russian tactical communications that have proved unfit for purpose.

Wagner makes ‘massive’ use of 152mm artillery, tanks firing in direct or indirect fire mode, and Lancet kamikaze drones to soften a defensive position.  Some attacks may be supported by an air strike or attack aviation.  ‘Armoured vehicles [tanks/AFVs] in the vast majority of cases do not accompany the infantry, [but] protect themselves from damage, and work from a distance.’

Wagner uses 82mm and 120mm mortars as well as AGS grenade launchers.  These are suppressive area weapons.  The combination of the AGS with 82mm mortar can be effective due to high rates of fire.  The Russian 120mm mortar has a low rate of fire.

The use of drones

‘Wagner pays great attention to the use of drones,’ Butusov explains, ’especially the most affordable ones – “Mavik” and “Matrix”.’  Drones are used both to identify targets and for command and control of the assault:

‘Drones monitor the movement of assault groups and monitor the situation at the attack site.  The headquarters of the assault detachment tries to have continuous information about the movement of combat groups and the situation at our position, which is chosen as the object of attack.  That is, the assessment of the situation, the need to move forward is determined by the commander of the assault unit at the headquarters.  Team – forward along the route, team – stop, spread out, we are waiting.’

Conversely, ‘Damage to drones means the loss of effective control of assault groups.’

The assault is best described in Butusov’s words:

‘Several assault groups are directed to the specified object of attack, which are advanced in daylight.  The main task is to covertly approach the attack line, then run to our trenches and secure a position there.  Retreat in many cases is not provided for.  In most cases, the enemy tries to inflict fire damage on our position, and to provide support for the attack under correction from the drone with fire from AGS and mortars simultaneously with the actions of the assault groups.  But if the terrain allows you to approach at a close distance and concentrate, for example, on the terrain, or under the cover of fog, the assault groups are sent even without artillery preparation, based on speed.  If there is an order, the group will attack even in the face of aimed fire from close range.’

These are costly infantry attacks in the style of World War I.  The all arms assault familiar to a British soldier is rarely witnessed.  The reason why the tank was invented is lost.

Wagner reprises the Russian penal battalions of the war.  High losses are accepted. More convicts can always be recruited (according to Russian researchers ‘the probable number of prisoners recruited for the war in the Russian Federation is up to 23,000 people’).  There are no social or political consequences (‘It’s either prisoners or your sons’).  The dead are not accounted or even recovered.  The maimed chance their luck with compensation payments that are not always paid.  Butusov explains: ‘Losses do not reduce the combat effectiveness of units, as commanders and staffs of units, weapons operators, intelligence and control remain a permanent composition that is not expended in assault actions.’

Lack of consideration over casualties incurred means Wagner will typically attack the same point repeatedly in the hope of achieving some yardage.  ‘The attacks actually have the character of constant reconnaissance by fighting [with] small groups of infantry.’  Ukrainian defensive fire inevitably exposes the firing points to drones.  As a consequence ‘the shelling of our positions after a repulsed attack is carried out more massively than artillery preparation.  And then a new attack…is prepared.’

The actions end when manpower, ammunition or daylight is expended (as night attacks are not attempted).

Like the Red Army penal battalions, discipline is punitive.  ’Independent withdrawal is allowed only for the wounded.  Voluntary departure without a command or without injury is punishable by shooting on the spot.’

Separately, it has been reported Chechens are used as ‘black policemen’ (the origin of the term is not known).  These act as enforcers behind the assaulting troops.

‘Intelligence’: This is the requirement for ‘the drone to conduct continuous surveillance of the surrounding area… at least the entire daylight part of the day.’  In other words, to boast a means to monitor the enemy assault from the air throughout the duration of the action.

‘The withdrawal of our fighters during another attack by the “Wagners” in many cases, which were recorded on drones, is related to the lack of understanding of the tactical situation in the conditions of a long battle, and not directly to the pressure of the enemy.  We have the ability to keep a significant number of drones in the air, but often their capabilities are not used because the data does not reach our fighters on the battlefield, or does not reach firepower calculations, and the information is not implemented.  Manoeuvre contact battles require high-quality interaction.  When you study how the “Wagnerians” managed to get into one or another position, the shortcomings of the organization of intelligence and management always become obvious.’

‘Tactics’: Ukrainian defensive tactics resemble German World War I (and Second World War) tactics.  These have several elements: anticipation of the attack axes, ‘high-quality organization of fire’, ‘well-disguised and echeloned defence’, and ‘a counterattack using armoured vehicles.’  Overall, ‘Against the “Wagners”, a defensive manoeuvre is needed.’

Holding the first line of trenches (the ‘trip line’ as it was known in German terminology) at all costs is avoided.  This leads ‘to artillery damage and significant losses for the defenders.’  Instead, ‘Defensive units should be able to withdraw to reserve positions, and surveillance should be strengthened on attack routes.  And then even if someone [enemy] manages to advance under fire to an advanced position,  there will be losses… positions from the flanks must be able to cut off the approach of significant enemy forces, and the situation can be restored by a counter-attack of the tactical reserve with armoured vehicles.’

‘It makes no sense to hold a position until the last while the enemy bombards it, and constantly replace people in this position, because the “Wagnerians” will not run out, their goal is to impose an exchange on us.’

In sum: ‘The level of individual and group training of the “Wagners” is weak, control in assault groups is immediately lost under fire, losses during attacks are high.  [With]…flexible tactics that allow withdrawal from the position at which the enemy fired, and in the presence of a tactical reserve for a counterattack, our soldiers confidently repulse all attacks of the “Wagnerians”.  Even with a shortage of shells for artillery, it is possible to repulse the attacks of assault groups with high-quality organisation and management by infantry forces.’