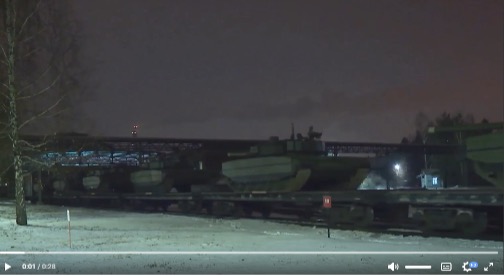 On 7 December, a 29 second YouTube video appeared on the net apparently showing a company batch of upgraded T-72B3M Russian tanks on rail flatcars at the Uralvagonzavod (UVZ) works.  The footage was oddly shot at night with a corporate, female voice-over (rather than robotic MOD spokesman).  The background music also indicated a corporate video production.  Snow on the ground suggests the footage is genuine.

The short video appears to have been released for propaganda purposes: Putin commanded equipment problems be resolved, and lo, here they are.

Whatever the reason for the release, a number of features on the tanks have raised the question whether this batch deserves new nomenclature: T-72B3M2, T-72B4 or perhaps just T-72B3M (model 2022) (in the Russian style where year of manufacture distinguishes the variant).  The new features improve protection. They are:

Some caution is advisable.  A company batch of tanks does not necessarily represent a new variant.  It is possible the video was purely for propaganda purposes and the tanks are incomplete (because electronics, sensors and other components were foreign-sourced and are now unavailable).  Proof this is an operational tank—whatever the nomenclature—will be its presence in Ukraine.

While additional protection is likely welcome, the basic vulnerability of a tank design based on a carousel automatic loader with non-compartmentalised ammunition is unchanged.  T-72 tank crews sit on a bomb.  At the time of writing, at least 794 have been lost in Ukraine, according to the Oryx database, including 443 T-72B3 variants.  The true numbers will be higher as Oryx only counts losses with visual evidence.

Importantly, the video fails to answer the puzzle over the true state of Russian tank building and repair, or how it will replace lost tanks given the rate of loss.  Before the invasion, Russian tank production varied between 100-200 annual units but a proportion of this output was upgrades rather than new-build tanks.  The Oryx database shows Russian forces have lost in total at least 1,570 tanks in ten months. At the end of 2021, Russian defence journal Voennoye Obozreniye (‘Military Review’) reported the Russian Army fielded around 2,600 tanks. More than half the tank fleet has been lost.  The resultant graph is uncomplicated (and absurd).  If current trends continue, the steep downward line of tank losses will intersect with the shallow line of replacement tanks in 2023 and show the Russian Army has been reduced to a very small and operationally irrelevant tank fleet.  Russia will have ‘de-militarised’ itself, as Ukrainians joke.

Instead, in mid-October, it was reported 103rd Armoured Plant had received a contract to supply the Russian Army with as many as 800 modernised T-62M tanks over the next three years.  The Russian MOD is restoring a 60 year-old tank.  The report provoked controversy in the Russian milblogger community and unconvincing rebuttal.  Shortly afterwards, video emerged showing twenty-eight T-62Ms on rail flat cars at 103rd Armoured Plant en route to the front.  The original story—it seems—was true after all, and furthermore the T-62Ms were not modernised at all.  They were the basic, original model without even side armour.

Concurrently, it is reported the Belarus MOD has transferred as many as 122 T-72As, the original, basic and vulnerable variant, to Russia.  Why is the minion Belarus transferring its only operational tanks to the Russian Army?  The clue may lie in the word ‘operational’ – they actually work.  Behind all this mystery is the inescapable thought that Russia’s tank reserves were a bluff.  The reason why the T-72s in storage remain in storage is because they long stopped working, have been cannibalised, or are in such a poor state that restoration and refurbishment is uneconomical (and sanctions mean parts for the ‘modern’ T-72 variants are unavailable anyway).  The T-62 fleet in storage is also likely in a poor state but parts are Russian and cheap, and 103rd Armoured Plant is a facility that is operational and functioning (the war has also exposed the bankrupt state of Russian armoured vehicle repair plants).  T-62Ms were being modernised for the Syrian Army anyway so supply to the Russian Army was a logical if surprising step.

As the war progresses, some of these puzzles may be resolved.  What cannot be denied now is that Russia’s tank fleet is in a state of crisis.

A War for the Mind

The UK’s tilt towards the Indo-Pacific – a correct move