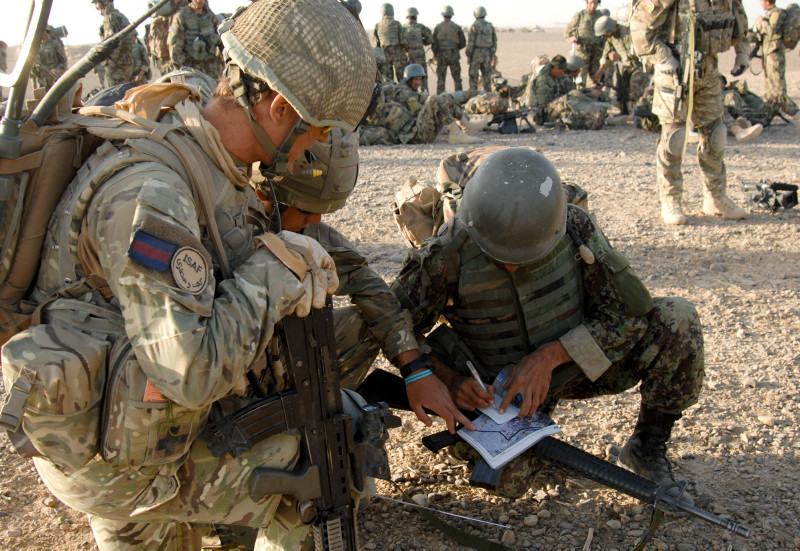 At the 2017 RUSI Land Warfare Conference, General Milley, the Chief of Staff of the US Army, spoke about myths.  His third myth was that “special forces can do it all”; noting that there is a great tendency to “place over-reliance and over-stretch on our special forces and to ask of them things that they are not designed, nor capable, of doing”[1].

This post has nothing really to do with special forces but as someone who has grated against the reluctance to deploy regular troops in front-line roles, these comments stuck with me.  On 9 Oct 17 a CNN report titled “Special operations forces should not be America’s Band-Aid”[2] following the reported deaths of four US soldiers (including two Green Berets) in Niger popped up on my news feed.  Whilst US centric, the article quoted a number of interesting sources and got me thinking about how this related to the British Army, the narrative surrounding ‘train-advise-assist-mentor-accompany’ and my long-held belief that that an Army not involved in some form of front-line activity cannot be seen as credible or a benchmark for others.

The CNN article included references to two other sources.  Firstly, a February 2017 New York Times article that reported a significant milestone.  The previous 12 months had seen the first period in US Military history where the deaths (in combat operations) of Special Operations Forces outnumbered those of Regular troops.  Of the 18 US combat deaths, the NY Times noted that two-thirds were SOF despite comprising just 5{4dab693c107f7b6d4058a0febcf4eed43717abc6a37e80004208d6080fd302b5} of the US Military[3].  Secondly, the article referenced the testimony of General Raymond ‘Tony’ Thomas III, the head of US Special Operations Command (USSOCOM) before US Congress in May 17.  When asked to comment on the increasing use of special operation forces and whether the US was relying too heavily on them, General Thomas was candid in his reply: “First and furthermore, we’re not a panacea.  We are not the ultimate solution for every problem”[4].

The NY Times article powerfully articulates the risks involved in asking so much of a dedicated but small force with limited resources.  It also touches upon other issues, such as the presentational impact that our choice of force has on those we wish to influence at home and aboard.  Sure that the venerable Maj Gen Rupert Smith had said something on the subject, I unsucessfully searched for a quote.  Happily it turns out that the current Army CGS is of a similar belief.  At the 2017 Richard Homes Memorial Lecture in London (9 Oct 17) he stated that political desire to reduce the risk of military operations had “spawned a number of fallacies.”  The most relevant was the warning that drones and special forces alone cannot win conflicts and that the use of proxies should be tempered; conflicts can only be decisively won by land forces[5].  It is heartening to see British senior officers championing this narrative.  US General Milley went further at RUSI stating that “it is nations that win wars… forces conducting combined arms operations and joint operations [that] go to war”[6] … Such words are catnip to a child of Blair’s Wars.

For me, there are two ‘so whats’; the impact on the British Army’s attempts to get back into the risky business that is ‘accompanying’ mentored forces into battle, and the re-insertion of the nation into our use of force.  Regarding the first, the forming of the Specialised Infantry Battalions (Spec Inf) to “conduct Defence engagement and capacity building, providing training, assistance, advice and mentoring to our partners”[7] is the vital ground.  Whilst noting that the word ‘accompany’ does not make it into Hansard, in my view it is absolutely key for the Army’s attempts to return the use of ground troops to the policy makers tool-kit, maintain the utility of the Army, the core role of combat and frankly the credibility of the British Army at home and aboard.

The British Army has a long and proud tradition of working with a broad spectrum of local armed forces across the spectrum of ‘train-advise-assist-mentor-accompany’.  Many serving readers of this article will have served with Iraqi or Afghan military or security forces (plus a plethora of others) and I strongly believe that regardless of the potential fuel that the presence of Western troops adds to certain theatres, to not be fighting alongside our allies is embarrassing.  However, it is General Milley’s comments on the role of nations in winning wars that provides the most interesting point for discussion.  On a recent military education course, I read an article on the impact of using precision stand-off munitions that resonated with me; I believe that the same comments are relevant to the current situation in which the UK does not ‘accompany’.  The author argued that the maintenance of legitimacy is the most important consideration in modern conflict, which is hard to disagree with.  He described how the increasing distance of Western troops from the actual battlefield due to the use of technology (I would extend this to the use of proxies and the absence of regular troops) can undermine that legitimacy.  In fact, he went so far as to suggest that the “successful coercion of an opponent requires that one demonstrates resolve, and by demonstrating a willingness to kill but not to die for a cause, that fundamental resolve can be questioned, making the use of force less credible even as it becomes increasingly sophisticated”[8].

I am not advocating a steady ‘body-count’ to justify military options but I do believe that if we are to truly embody the principles behind ‘modern deterrence’ and to remain a credible and reference Army, we need to be accompanying, even leading.  So to that end I wholeheartedly hope that the efforts of our senior Generals to shift the narrative are successful and that, like our American allies, we increasingly send our Regular troops out to ‘accompany’ our partners, and give others a break.

Matt has 10 years experience as a leader in the British Army. He has deployed operationally to both Iraq & Afghanistan.