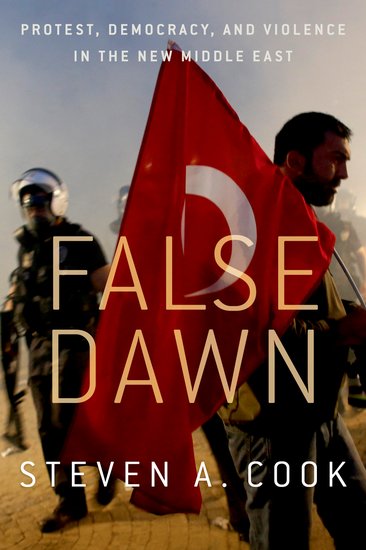 An explanation of why democracy did not develop in the wake of the 2011 ‘Arab Spring’ uprisings.

A senior fellow at the Council of Foreign Relations, Steven Cook is no doubt a regular contributor to the policy brainstorming sessions held over muffins and weak coffee in the characterless office blocks that he describes ringing the Washington beltway.  His title ‘False Dawn’ refers to the unrealised hope of the growth of democracy in place of authoritarian government in the Middle East and North Africa in 2011.  After explaining the context and reasons for the failure of the uprisings in Tunisia, Libya, Egypt and Turkey, his resultant recommendations for policy are based on a revealing appraisal of the limited political influence of the US in the region.  As the coalition prepares for the aftermath of the defeat of the Islamic State, False Dawn’s warning that the US cannot, and so should not try to, shape Middle Eastern politics should also be heeded in the UK.  For British military officers  tasked with provision of security, and the unavoidable regional presence and engagement this brings, this creates a dilemma.

False Dawn offers an explanation why the 2011 uprisings in Tunisia, Libya, Egypt and Turkey did not usher in the new era of democracy that was expected at the time. After setting the context of the excitement generated by events, Cook rewinds to develop a detailed understanding of the social, political and economic situation in the four countries analysed in detail.  Following a description of the uprisings, he goes on to describe how the apparent freedoms gained quickly unravelled (or did not take hold at all in the case of Turkey).  In the second half of the book Cook analyses whythe uprisings failed, focussing on three core reasons:  they were not revolutions and did not bring about social change or truly remove the authoritarian leadership; the institutions of the affected countries were extremely resilient (‘sticky’); there was no consensus over identity around which the people of the countries affected could rally.  Finally Cook assesses the role  of the US, concluding US political influence in the region is much weaker than broadly assumed.  As a result she should abort the decades long effort to compel democratic reform in the region: it is impossible to impose this externally and can only be done by Arabs and Turks.

Whilst relatively accessible, False Dawn relies on prior knowledge of the events and context of the 2011 uprisings and subsequent course of events in the Middle East.  The chapter dedicated to establishing the conditions in Tunisia, Libya, Egypt and Turkey before the uprisings is hard work for the economically uninitiated.  However, perseverance here is rewarded with a gradually developed argument that elegantly weaves the separate stories of the four countries together into common themes, establishing the three fundamental reasons for the uprisings’ failure.  Their non-revolutionary nature and the ‘stickiness’ of institutions look like the same thing but are distinct in their social and structural focus, respectively.  The third reason, a lack of coherent identity, provides the most interesting section of the book.  A crash course in the sociological theory of human identity sets the scene for discussion of the perennial struggle between secular and religious government – mandatory in any conversation regarding the Middle East!  This develops to then address the rise of Islamic State who, Cook argues, benefitted from the incoherence of identity in the wake of the uprisings, by offering a home to many thousands of disaffected young men.

Having analysed the failure of democracy to genuinely take hold, False Dawn establishes the relevance of events for the US.  Cook argues, convincingly, that US political influence in the region is very small.  The US is simply unable to force Middle Eastern Nations to liberalise and democratise and this can only be done from within the region.  Because it is impossible, Cook argues, the US should stop trying.  He touches upon but does not develop the key complexity, though, that national security concerns always trump political concerns and so military involvement and security engagement in the region is inevitable.  As a result the US will be unable to extricate itself from the reputationally damaging political struggle.

This is the most important lesson for British Military officers when planning and conducting operations and defence engagement in the region.  If Cook is right, transposing the US argument suggests that involvement in Middle Eastern politics is a lose-lose situation for the UK.  This cost should be noted and factored in if the British military is forced to act in the region in the interests of national security.