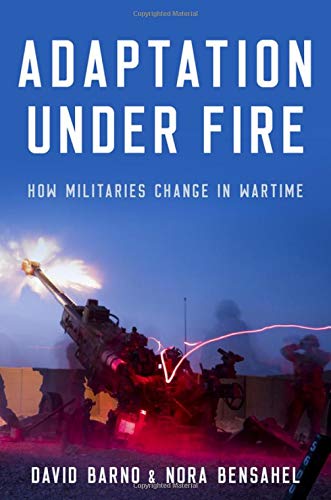 Western militaries are awash with programmes and projects that seek to enact meaningful change.  The US Army’s Modernization Strategy, or the UK’s Ministry of Defence transformation and innovation initiatives, seek to do just that.  Whilst the language of change can be debated at length, all these projects seek to do one thing – to adapt a force, ideally at pace, to meet the challenges of today and prepare them for the tests of tomorrow.  However, what has been lacking is a conceptual framework for how we consider this change and adaptation, from the tactical to the strategic and across all Defence and Security outputs.  Many nations have been guilty of understanding adaptation as exceptional, rather than routine activity.  This book seeks to fill that void by offering a framework, assessed against historical examples, to explain how we should and could conceptualise adaptation.

Co-authored by a retired US Army 3 star General and a widely published author on US defence policy and military operations, Adaption Under Fire has that rare blend of scholarly rigour mixed with the realities of modern application.  It seeks to test and evaluate its framework to assess if the US military is prepared for the challenges of future wars, and whether its current performance suggests it has embraced and developed adaptation enough to indicate likely success on future battlefields.

Adaptation Under Fire explores adaptation – identified as ‘change in ways that keep pace with environmental demands, whatever those might be and however fast they may go’ – and assesses it against the themes of doctrine, technology and leadership.  These 3 selected elements are expanded upon in detail, explaining to the reader both why they were selected, their respective historical significance and links in line with adaptation.  The bulk of the book is the assessment of historical events, ranging from tactical level vignettes during World War 2 to strategic level challenges using the more recent wars in Iraq and Afghanistan.  Whilst some knowledge of these events is useful to gain the most benefit from this narrative these tales, assessed against the authors framework, offer a fascinating and thought provoking view on both why adaptation is so critical to military forces and the often tragic repercussions of failing to adapt at a relevant pace.

Whilst the book focusses on US operations, there is still much to be gleaned for service personal and policy makers from other nations.  Indeed, some of the challenges explored will be recognised by many who have served from a variety of nations.  An element that is particularly interesting is that American soldiers, operating at the tactical level, have repeatedly demonstrated a willingness and ability to innovate and adapt, identifying and implementing new and novel solutions to their immediate challenges.  In contrast, this ability to both clearly identify challenges and offer potential solutions at the organisational and strategic levels have been a lot less successful.  Whilst these challenges are undoubtedly more complex and complicated, the authors are clear that either poor decision making, or an inability to overcome organisational inertia, have impeded US strategic adaptation.  Usefully, later on in the book, the authors offer a range of potential options to tackle the myriad of problems they identify.

The authors also discuss the future of war, noting the increased scale and speed of change which will potentially alter the ‘adaption gap’; the gap between the predictions we make and the reality of future wars.  This, they argue, when balanced with the unknowns of newly integrated space and cyber domains mean that a Army’s ability to adapt will only grow in importance in the years and decades ahead.

To conclude, this book offers significant context and substance to our collective understanding of military change and how we conceptualise adaptability.  Its clarity and purpose is refreshing in a field dominated by buzzwords and other language that routinely confuses activity and effects.  It should be no surprise that the authors make some substantial recommendations about how the US military should tackle this challenge, which are also applicable to other militaries.