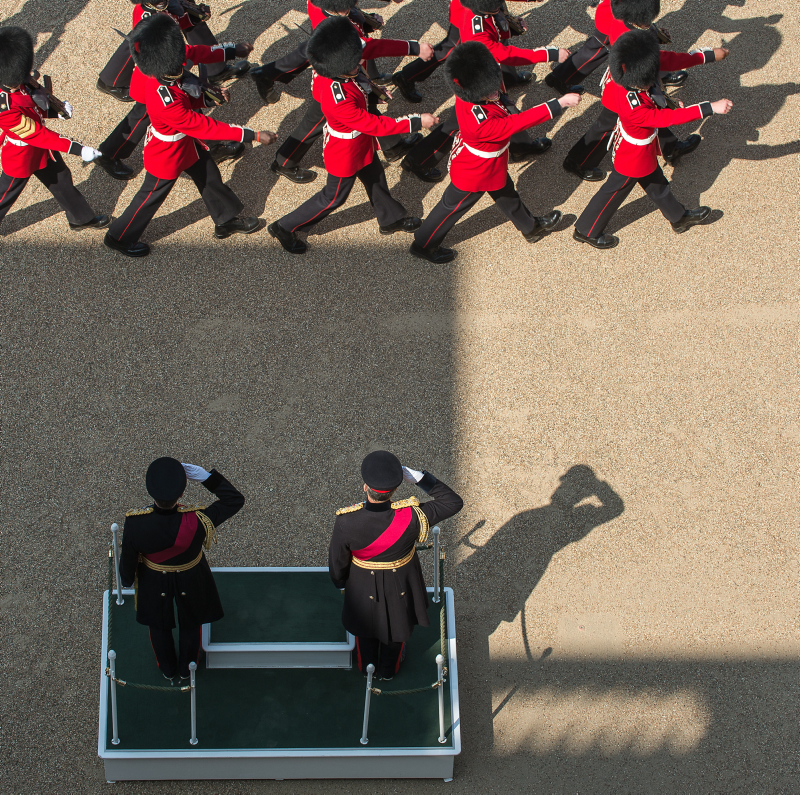 Bookshelves are not lined with celebrated accounts of Aides-de-Camp, and no one joins the Forces to become one. The Royal Military Academy Sandhurst introduces cadets to classic accounts of command such as Sydney Jary’s ’18 Platoon’ and James McDonough’s ‘Platoon Leader’. The last noteworthy account following an Aide-de-Camp (AdC) was James Grant’s ‘A Campaign in Calbria’, published in 1848. Yet, the role is crucial to the support of a Principal, and in return the AdC gains a sweeping view of command at the highest levels. The United States produce Military Aide handbooksfor each service, but there is no such equivalent in British Army doctrine. This may well be a consequence of the British Army’s Regimental system, and it is common for an AdC to find their Principal double-hatting their professional role within the Forces, with carrying out duties as the Head of a Regiment.

Despite the lack of specific doctrine for the role of AdC, the Staff Officers’ Handbook (SOHB) contains concise advice in its foreword that stresses many of the required qualities of a staff officer[1]. The day to day experience of the AdC draws comparisons with that of a personal assistant, and indeed, successfully performing the secretarial duties of the job are key to survival. However, as an AdC frequently finds themselves hurrying from one place to another, often carrying dossiers, regimental accoutrement, or indeed some article of their Principal’s uniform, the role also has much in common with the ancient position of the Squire which fittingly is ultimately derived from the Late Latin scutarius, or ‘shield-bearer’. Yet, in many countries the role of an AdC is primarily honorific and belongs to senior officers. In the UK, the Chief of the General Staff is invariably appointed to the position of ‘Aide-de-Camp General’ to the reigning monarch, and is entitled to the post-nominals ADC. Therefore, the role encompasses the jobs of an assistant, advisor and sounding board, in addition to the humbler tasks of tea-wallah and bag-carrier.

The AdC works with a team of other supporting staff. The Principal’s more senior Military Advisor (MA) will invariably be assigned the majority of the more conceptual tasks; in like manner, an Executive Assistant (EA), or equivalent, will oversee management of the Principal’s calendar, scheduling, and often – though not always – travel arrangements. However, there will be times when the AdC finds themselves carrying out all these tasks, and both the MA’s and EA’s roles are more tightly bounded by job specifications; these staff will be attached to the Principal in his role, rather than to the Principal as an individual. When a Principal changes position, the AdC will follow, whilst the supporting staff will not. The distinction between AdCs and Assistant Military Advisors (AMAs) is largely arbitrary. The latter implies a stricter focus on supporting the Principal’s primary job specification, but the reality is that just as the most junior soldier invariably ends up making the brews, the AdC, or AMA, is likely to be the most junior officer in his environment and will pick up any menial jobs that come their way. Many of these implied tasks, taken in isolation, do not demand an officer, and in fact could be well-executed by a competent NCO. However, the prestige and the privilege of being an AdC lies in the aspect of apprenticeship. While an NCO could perform many of the AdC’s tasks, they would not benefit in their future career from the exposure an AdC gains to the world of a General officer.

There is no single winning formula to surviving as an AdC, but the relationship with the Principal must be personable as well as professional. At times, the relationship manifests to a uniquely filial degree, complete with dreaded ‘disappointed parent’ speeches. However, the AdC’s best chance of surviving in his primary job of supporting his Principal will be to develop real affection and consideration for them. Like any relationship, that between an AdC and their Principal takes time for trust and familiarity to build. The transition from life at battalion to that of an AdC can be stark. The formula for success will necessarily involve long-hours; unfailing diligence; the care and management of relationships on behalf of the Principal; and the near-constant coordination of the minutiae of the Principal’s life. In fact, an AdC will feel that they are managing two lives in parallel, with preference in all cases being given to the well-being of the Principal. The professional satisfaction of an AdC comes from sacrificing personal concerns to help their Principal achieve success. The parallels with setting the conditions for success in a right-flanking Brecon-style attack may not be immediately obvious, but in essence, an AdC’s job is simply to get their Principal to the line of departure, at the right time and in the right dress. What follows comes down to the Principal, and if all goes to pot, at least the job is only for a year!

Tom has leadership experience with Airborne Infantry and has recently worked as an Aide-de-Camp for a Senior Officer.