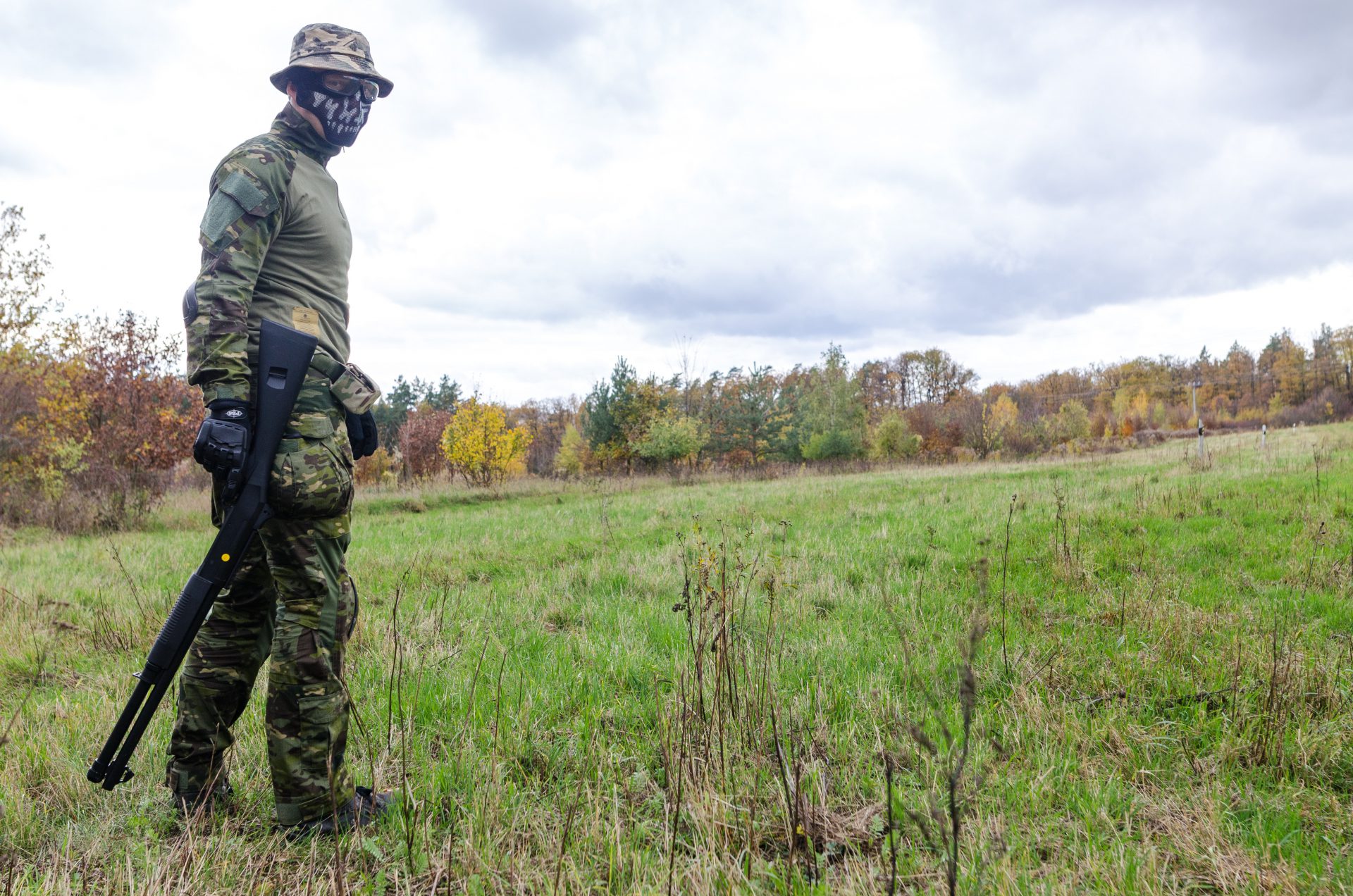 The British army is changing. In 2010 the regular army had 102,200 service personnel, but the army’s current restructuring plan, ‘Army 2020’, envisages a reduction of 20,000 to 82,000 regular service personnel – which would make it the smallest the regular army has been since 18501. In this context there has also been a considerable restructuring of roles, involving the diminishing of old capabilities and the emergence of new ones. Most notably, the creation of a dedicated information warfare unit ‘77 Brigade’ in 2014, and plans for five new ‘Specialised Infantry’ battalions as part of the ‘Army 2020’ are indicative of a significant conceptual and organisational shift within the UK military. Yet many of the capabilities that the army is trying to create with ‘Army 2020’ already exist within a burgeoning and increasingly diversified private military and security (PMSC) industry. It is clear that the transformation of military capabilities is not occurring in isolation, but is intrinsically related to broader shifts occurring within (and to some extent, through) an increasingly organised and influential PMSC industry.

The Social, Political and Military Drivers of Change

Cuts to the military (together with other public services) in the wake of the financial crisis of 2008 gave rise to the perception that the army was reacting to a situation in which it increasingly had to ‘live within its means’. At the same time, defence cuts seem to have been viewed as an opportunity for military leaders and politicians to enact changes in the military sphere that were reflective of wider changes in the social and political realm. The wider trend towards privatisation of state assets and the ideological dominance of neoliberal managerialism (viewing reality through the technocratic lens of costs, efficiencies, profits and competition) have resulted in an increasing tendency to view the army as a quasi-business entity. Speaking at RUSI in June 2017, General Sir Nicholas Carter (then head of the army as Chief of the General Staff) expressed a wish to foster ‘that sort of culture which will create the virtuous circle which the private sector has understood forever, but the public sector perhaps does not understand so well’.2 As part of this trend, the influential management consultancy firm McKinsey & Company was brought in as the army’s ‘strategic partner’ in order to help them, in the words of General Carter, ‘become a cleverer customer’3. Perhaps unsurprisingly, McKinsey’s strategic advice has recommended an enhanced program of outsourcing, citing amongst other reasons, the costs of health care and pensions for veterans 4

This is an agenda that shows no signs of easing up over the coming years. General Mark Carleton-Smith replaced General Carter as the new head of the army in June 2018. His first public speech indicated that the outsourcing agenda that crystallised under his predecessor will only be intensified. Addressing an audience at RUSI, the General spoke of the need to test ‘the boundaries of sovereign ownership with revised mechanisms for the pooling and sharing of capabilities’, and to attract ‘people whose aptitudes are highly sought after in a global market and whose instincts are more independently-minded and less hierarchical than some in uniform would feel comfortable with’.5

These changes are, of course, also related to broader transformations in the nature of conflict and ‘war’. scholars have grappled with these changes, variously describing post-cold war conflict as ‘unending war’ (Mark Duffield) the ‘everywhere war’ (Derek Gregory), and ‘new … multi-sited war’ (Saskia Sassen) amongst countless other representations. In Western military doctrine, these changes are captured in the theoretical enlarging of the ‘battlefield’ to the ‘battlespace’, which in turn has seen non-state security actors such as PMSCs and Non-Governmental Organisations (NGOs) take on a new significance for governments and militaries. Accompanying this has been the (re)emergence of counterinsurgency (COIN) as a critical framework for understanding military activity. Though recognition of the strategic importance of managing populations has been a core part of COIN since at least the 1950s, COIN doctrine post Afghanistan and Iraq has increasingly moved away from its state-centric origins to emphasise that such population management can occur through a plurality of actors. This has necessarily resulted in an expanded role for civilians in military activity. These new sensitivities have also become more important in the context of the increasing mediatisation of war, and the realisation that ‘winning’ in the ‘post-truth’ information age no longer means defeating an enemy militarily, but also in winning the wider narrative, both at home and abroad.

The planned ‘specialised infantry battalions’, in conjunction with 77 Brigade, can be seen as reactions to the broader shifts in thinking about conflict, society, and the role of the state and the military outlined above. General Carter, speaking at a government inquiry into the planned restructuring in June 2016, argued that ‘Army 2020’ gave provision for ‘a larger battlespace’ and the opportunity to ‘dominate ground and population mass in a rather different way’6. Arguing that because we now live in ‘an era of constant competition’ where ‘the boundaries between peace and war are now much more blurred than they once were’ it was increasingly ‘important’ and ‘relevant’ to be ‘persistently engaged overseas’. Crucially, this now means committing troops to a specific location, over a much longer time-frame. These demands require re-organisation of existing units into ‘bespoke structures’ that can ‘take greater risk’.7 Accordingly, General Carter explained to the government that the resulting ‘specialised infantry battalions’ will be smaller than regular battalions, numbering about 300 strong,

The Influence of the Private Security Industry?

At first glance this might appear to be an innovative and novel shift in the structure of the military, administered by pioneering military elites. Yet, as my own research shows, smaller, more mobile and adaptable teams of UK ex-military personnel operating in those grey areas between war and peace already exist, on-the-ground today with a remarkably light footprint in places such as Nigeria and Somalia. PMSCs and Humanitarian Security Professionals, supported by a cast of individual risk managers and consultants are on the ground in conflict and post-conflict environments across the globe. Their clients typically include multinational corporations, the UK and other foreign governments, humanitarian organisations, supranational political institutions and, increasingly, their own national military brethren. These teams are freed from many of the bureaucratic constraints national military forces are under, and often have unparalleled information gathering abilities through networks of contacts that have been built up over the course of years or decades, rather than months.

This has not gone unnoticed by the army. The Centre for Historical Analysis and Conflict Research (CHACR), a think-tank established by the Army, for the army, and comprising of military and civilian specialists has been a noticeable proponent for PMSCs to be more thoroughly integrated within the British Army.

It argued in a 2015 publication that:

‘UK PSCs operating successfully in the security sector today are well regulated, responsible companies with whom the MoD and British Army can with confidence do business … It is not just man-guarding, but the delivery of a whole range of activities in the area of training, mentoring and support that PSCs can seek to support the MoD and UK Government’s efforts abroad’.9

Another publication followed 18 months later, and sought to expand the possibilities for partnership, arguing that:

‘the benefits of exploiting this capacity would not be confined to the MoD and its chosen partners, but would be likely to spill over into the ‘soft power’ and influence agenda of both the Foreign and Commonwealth Office and Department for International Development and, by bringing business from abroad to British or British-based companies, have wider income and tax benefits to service the nation’s prosperity agenda’.10

This included ascribing a specific moral value to ex-British personnel, with the claim that

‘These are people who were trusted whilst serving and should continue to be trusted in the security industry … Their previous experience at Her Majesty’s expense means they have a solid foundation of skills and, in their second careers, are once again well trained, motivated and dependable’.11

From the state’s perspective, outsourcing therefore not only helps solve the age-old problem of what to do with retired army veterans, but it also reduces the political costs of intervention overseas.

Did the army take its cues from the private sector, or have the two emerged mutually as a consequence of broader structural changes? In either case, the army’s current restructuring must be seen in the context of a simultaneous and interrelated expansion of commercial private security activity. It is clear that accompanying the blurring of the boundaries between ‘war’ and ‘peace’ in the post-cold war era is the apparent dissolving of the ‘public’ and private’ categories. The full implications of this are yet to be seen, but it is self-evident that we should pay increasing attention to non-state actors such as PMSCs. A careful assessment of where they are, what they are doing, and what the implications of their increasingly normalised use in Western military doctrine might be is crucial to understanding the contours of contemporary conflict.

Furthermore, if the manpower reductions and associated re-structuring of the UK armed forces are linked to the increasing use of British ex-military contractors, some important practical and ethical questions arise. Firstly, is this a simple case of the political-military establishment essentially ‘privatising’ a section of its own military, or does understanding this require a re-thinking of what we mean by ‘public’ and ‘private’? Secondly, what are the implications for accountability, in particular through a potential weakening of democratic oversight over the armed forces? In the future, might previously unthinkable interventions be made possible by contracting teams of ‘deniable disposables’ to do the job without the same levels of accountability and with a much lighter footprint? Some evidence suggests that this might already be the case. Finally, how novel really is this idea of being ‘persistently engaged overseas’, and the associated use of ex-military contractors? Although these changes are clearly related to post-Cold War transformations, and dressed in the language of neoliberal managerialism, they also have clear historical connotations with the composition and deployment of force in previous eras. Colonial political-military administrators, for example, were expected to immerse themselves in their respective colony, to live there, learn the language and the custom, with many marrying local wives. Furthermore, explorers were typically financially supported by the state (often through the British East India Company). They were also given varying degree of tacit political support, though this was very much at arms-length, and most undertook their initiatives as ‘private citizens’. Change is inevitable, but rarely without historical precedent. Further investigation into the interdependencies between state and non-state military and security actors could help clarify these questions.