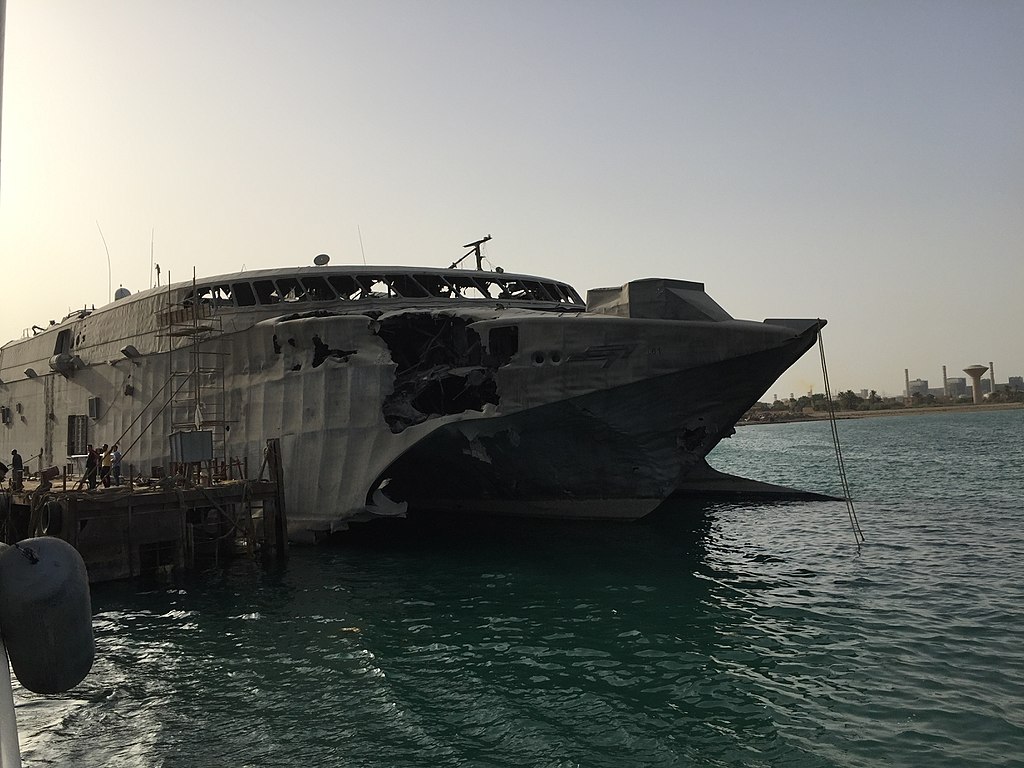 The Yemen conflict has involved sophisticated and effective attacks at sea in one of the world’s busiest maritime straits, through which passes a significant amount of the UK’s imported gas and oil.  Despite these attacks, the flow of shipping continues relatively unabated, even including pleasure cruises!  Those taking a holiday this year on the MV Aegean Odyssey cruise from Athens to Delhi will tuck into their turkey on Christmas day whilst they are only around a dozen miles away from this brutal conflict.  This short piece aims to explore what lessons we can learn from the maritime aspects of the Yemen conflict, especially those around the false assumptions we make of rebel groups, and the types of capability we use to operate in such areas.

Yemen has spent a large chunk of its modern history in crisis or conflict.1  The current civil war dates back to the revolution which swept President Saleh from power in 2011, and at the risk of grossly simplifying the situation, currently sees the Houthi rebels fighting a group of forces grouped around Abdrabbuh Mansur Hadi, the last person to be elected president.  In addition, a large number of Yemeni tribal, religious, and cultural groups have smaller active forces.  From abroad, the Saudi-led coalition2 conducts operations with the aim of supporting the UN Security Council resolution which seeks to restore the government to power (2216), and Iran supports the Houthi forces as part of their regional balancing strategy.3  Meanwhile, a range of relief organisations seek to prevent starvation and disease epidemics in what the UN Secretary General has called “the world’s worst humanitarian crisis.”

The Yemen conflict has only appeared in the western media sporadically, but the maritime aspects of the situation are often glossed over or ignored.  Detailed information is hard to find, but the Combined Maritime Forces’ Industry Releasable Threat Assessment gives a good summary of recent incidents and the current threat.  The overspill from the mainly land based conflict has seen the employment of sea mines, anti-ship cruise missiles, small boat suicide attacks, and remote-controlled water borne improvised explosive devices (WBIEDs).

Why should we care about what is happening in the seas around Yemen?  The Bab el Mendeb strait off Yemen is of course important to the UK and Europe because of the amount of trade and energy supply that flows through it, hence why HMS Daring was used to protect maritime trade from anti-ship cruise missile attacks in 2016.  As well as the enduring need to ensure the free flow of international trade, my suggestion is that we should also be interested because we can learn valuable lessons from this conflict, whether we are called upon to conduct operations off Yemen or not.  There are lessons here both for how we think about operations in this kind of operating area, and for how we design our fleet to be ready for such operations.

The waters off Yemen are congested and cluttered.4  If we accept the conclusions of “Global Strategic Trends – Out to 2045”, this is likely to become a normal operating environment for maritime operations short of total war.  Yet the nature of this environment, and how the Houthis have acted, is worthy of further consideration.

The attacks at sea have included highly sophisticated actions, not normally associated with rebel groups such as the Houthis.  In 2016, HSV-2 Swift (a fast cargo ship owned by the UAE government) and USS Mason (Arleigh Burke Destroyer) were attacked with anti-ship missiles, which open source analysis assessed to have included the relatively advanced C-802.  Swift was nearly completely gutted by the subsequent fire, but USS Mason, at high alert after the attack on the Swift, defeated the incoming missiles.  The Saudi Frigate Al Madinah was attacked in early 2017.  Al Madinah was attacked by small craft (video here), which the Houthis claimed included a remote controlled WBIED, although some Saudi sources claimed that the boat was piloted by a suicide bomber.  The French-built ship was not a particularly modern design, but nevertheless had a relatively capable suite of defensive measures against small craft.  For unknown reasons they failed to intercept the small craft and the frigate sustained serious damage and significant casualties, requiring it to return to port for extended repairs.

Looking back on the attacks carried out in the Southern Red Sea and the Bab el Mendeb Strait, it is striking that few merchant ships have been hit – apart from some owned or operated by the members of the Saudi led coalition.5  This is interesting as it implies that the Houthis are making significant effort to ensure that they do not risk further international counter-action that would surely follow.6  They are thus operating under a significant self-restraint which massively limits their freedom of action at sea, although we should understand that even with this restraint there are still risks of miscalculation or mistakes.  In the maritime domain we all too often make assumptions that non state actors may operate with few constraints or restraints.  I would suggest that the lessons here are that we should always look for ways to induce our enemies to impose restraints on their action, and when conducting our planning, we should carefully evaluate how to exploit their restraints.

What do we Need to Operate Here?

To conduct operations in such an environment, the force must be able to protect itself simultaneously from anti-ship cruise missiles, mines, and small boat attacks including WBIEDs.  To do this, the RN’s current force has an advanced mine countermeasures capability and the potent Type 45 air defence destroyer.  The RN’s mine countermeasures vessels (MCMVs) have defences against small boat threats, but due to their size and role are limited in their ability to detect such threats at range and lack the required level of defence from missiles.  The Type 45 has a superb missile defence capability, but to provide this has to be a large vessel which therefore cannot operate in shallow waters and is harder to defend against small boat threats.  Whilst neither can safely operate alone, combining them enables a holistic defence.  The Type 31e light frigate is expected to join the Fleet in 2023.  By virtue of its smaller size, it will be able to operate much further inshore than the Type 45, but if it carries the Sea Ceptor missile will be able to defend itself (and probably other ships close to it) from missile attack.  It is likely to have much better defence against a small boat threat than MCMVs, not least through its ability to carry a helicopter such as the Wildcat and its more advanced sensors and weapons.  The potential deployment from T31e of unmanned or autonomous underwater systems for mine clearance could even remove the need for a dedicated MCMV in some situations.  The Type 31e therefore offers an attractive compromise in this kind of environment, releasing other units to important tasks such as the defence of a carrier strike group.  This type of vessel has frequently been criticised as having utility only in low end or constabulary operations, and of very limited utility in high end conflict.  If we accept the conclusions of Global Strategic Trends (GST) that this operating environment is likely to be more prevalent throughout the spectrum of conflict, then there is a lesson that small capable frigates have a key place in Navies who need to project power globally.  This includes their use in high end conflict, where these ships can operate closer inshore (either alone or in groups) to contain threats and prevent risks to larger assets such as carrier strike groups.7

In conclusion, there is a lot we can learn from the events off the coast of Yemen.  Firstly, our often used (but somewhat lazy) assumption that terrorists, rebels, and non-state actors will be able to operate in an unconstrained and unrestrained way is not always valid, reinforcing the wider lesson that assumptions need to be questioned and re-examined regularly.  Secondly, we shouldn’t think of the advanced (and expensive) capabilities of our warships as only being useful in conflict with a peer enemy, they are necessary for non-state threats as well.  Modern operations require a mix of high and low end capability.  The Type 31e is sometimes derided, but will (if properly equipped) be ideal for the future maritime operating environment.  Overall, the Yemen conflict is worthy of interest and study, in the maritime domain as well as on land and in the air.