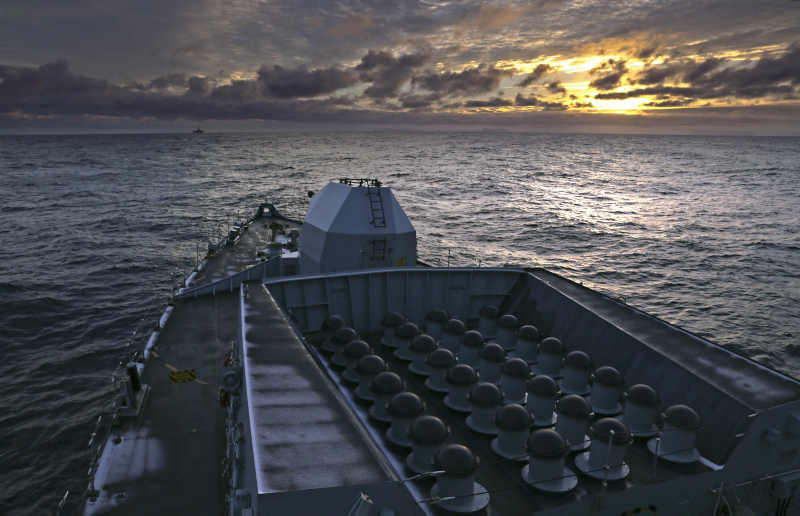 This article is based on a presentation made during my Intermediate Command and Staff Course (Maritime) to answer the question “Does the Royal Navy need to reconsider our critical capabilities and high value units in light of adversarial behaviours and force dependencies?”

The Royal Navy’s strategic design is based in a post-cold war fantasy, where carrier or littoral strike groups can operate around the world, uncontested.  The realities of the global context mean that this is no longer the case, and the paring back of the frigate and destroyer fleets – used to establish and maintain sea control – and failure to invest early in information warfare has left the RN with significant shortfalls in the critical capabilities which underpin our ability to project power around the globe.  Resolving these shortfalls poses a problem to a cash-strapped force; novel solutions are required.

The 1998 Strategic Defence Review (SDR) focussed the RN on power projection by investing in new aircraft carriers and sustaining the littoral manoeuvre capability provided by the amphibious task group and 3 Commando Brigade.  Russia was no longer considered to pose a threat, which allowed the SDR to start the process of reducing frigate and destroyer numbers.  Over the intervening 20 years, 35 ships have become 19; the minimum number to support expeditionary operations and maintain a token presence in the North Atlantic.  There was no investment in information warfare capability; while subsequent reviews have provided in this domain, the RN remains a passive, defensive user of the electromagnetic environment and cyberspace.

Since 1998, significant changes in the international environment and advances in technology have drastically altered the world in which we operate.  The 2015 Strategic Defence and Security Review identified the resurgence of state-based threats as a significant risk to UK national security, particularly noting Russia’s “willingness to undermine wider international standards in order to secure its perceived interests”.  The annexation of Crimea and support to separatists in eastern Ukraine, and the use of a nerve agent in the 2018 Skripal poisoning demonstrate this.  At the same time we see a naval rearmament programme, increased levels of activity in the North Atlantic and Mediterranean, and continued investment in offensive electronic warfare capability.

In the far east, an assertive China is “open for business” and expanding its trade routes through the Indian Ocean into Africa and Eurasia, with an increasingly global military footprint.  Closer to home, expansion of artificial islands and the likely proliferation of anti-access area denial systems in the South China Sea, and well-documented advances in cyber and counter-satellite technologies complete the picture.  Should a conflict with a peer or near-peer adversary emerge, through political miscalculation or economic competition, such nations will not stand back and allow us unhindered access to the battlespace; sea control will be contested and we are likely to enter conflict at an information warfare disadvantage.

As such, while the RN’s high value units – our expeditionary forces and continuous at-sea deterrent – will remain central to the delivery of the National Security Strategy, the capacity to gain sea control and information advantage will be the critical capabilities that underpin our ability to fight.  Development of these areas is therefore essential.

The rapid adoption of information technologies by our potential adversaries means that they are likely to enter a conflict with information advantage – likely by denying our freedom of action within that domain.   To reverse this, it will be essential to gain the initiative, and to do so we will have to redefine the terms, or nature, of its use.

Firstly, we must strive to reduce our use of and dependence on systems that are vulnerable to cyber-attack and electromagnetic denial.  By routinely operating on restricted bandwidth and peacetime modes, our surge to full capacity should surprise the adversary.  This will require investment, particularly in areas such F35B ‘offline operations’, and in bolstering organic intelligence analysis capabilities, reducing the requirement for rear-link support.  It will also require the RN to practice a high level of devolved command and control, reducing reliance on communications bearers, though increasing political risk.

Secondly, we should develop offensive capabilities, both in denying use of the electromagnetic environment, investing in jamming technology, and in offensive cyber capability. It is incumbent on the RN to work closely with other government departments to develop our capability commensurate with investment in national cyber capability per the National Cyber Security Strategy.

AI and Autonomy for Sea Control

While the decrease in frigate and destroyer numbers may lie at the heart of this shortcoming, reversing this trend does not present a viable solution, given financial and personnel constraints.  2017 saw the highest level of Russian activity in the UK area of interest since 1983; the challenge posed by peer or near-peer conflict will be to achieve sea control both in an area of expeditionary operations, and around our sovereign territory.  This is particularly important when one considers the British Army’s reliance on sealift for divisional manoeuvre.

Sea control will require the RN to maintain a high level of situational awareness in a wide area, and be able to influence actors by the application of offensive action.  While the restoration of the UK’s maritime patrol aircraft capability will aid this, the nature of air power means it will not provide a persistent solution.  Such a solution, however, may be found in the development of artificial intelligence and autonomous systems, pairing new technology that is relatively inexpensive in both personnel and financial terms with manned surface and air platforms to offer both functions – situational awareness and combat power.

Some systems of this type have been demonstrated in the UK and US, including artificially intelligent systems for underwater search, at Exercise Unmanned Warrior in 2016, and swarming autonomous aerial vehicles, by the US Navy.  They offer an opportunity to maintain situational awareness of a broad area, conducting search and tracking functions that are currently asset-heavy, presenting commanders with the information required to best position manned assets.

In summary, changes in the international environment have exposed shortfalls in the RN’s strategic design, and in a future conflict, sea control and information warfare will underpin the successful employment of expeditionary forces from all three services. Investment is required in those areas, to reduce reliance on vulnerable bearers, improve offensive EW and cyber capabilities, and develop an efficient means of exerting sea control.  There are paradoxes to overcome (increased use of autonomous systems is likely to increase reliance on communications bearers), and financial challenges to manage, but if these areas are not supported, one might consider our expeditionary forces over-exposed, and likely to fail.

Tom is a Warfare Officer in the Royal Navy, with over a decade of experience.  The bulk of his seagoing time has been in support of strike operations in the Mediterranean and Arabian Gulf.