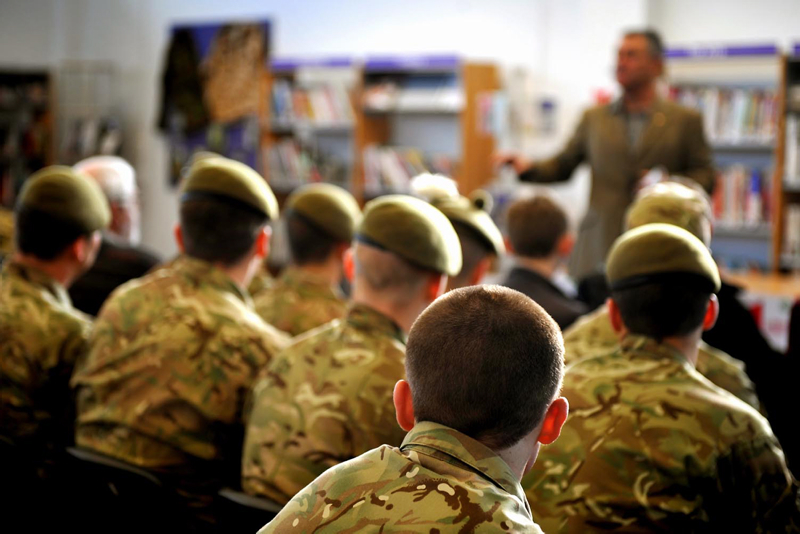 Are we casting adrift those who fail to make the grade, be that officers or soldiers, sailors and airmen? The immortal words ‘Let’s have a look at what you could have won’ were uttered by Jim Bowen at the end of each episode of Bullseye whenever the couple in the final had failed to win Bully’s Star Prize – for contestants living in the Midlands, miles away from the sea, this would invariably be a speedboat. The prize was revealed when a large curtain was raised leaving the hapless couple to stare at their Bendy Bully and contemplate a life devoid of speedboats.  Today, it’s a hapless trio from the Chase who see their 18 points total cruelly eaten away by the ‘the Beast’ until their jackpot vanishes or Ted and Leslie who though Tom Cruise was a pointless answer for actors in Top Gun.  You may think that a cliché-ridden game shows have little, or indeed nothing at all do with Professional Military Education (PME) but allow me to explain.

The provision of PME to Service personnel should be front and centre of how we grow Defence’s conceptual capability as well as developing individuals. A graduated and tiered approach to providing PME is a good fit to our hierarchical way of life; get promoted, learn some stuff you now need in your new rank, use it, develop and go again. The one snag of course is that PME aligned to rank travels along the path of diminishing returns; it is intellectual property that can only be accessed by the chosen few; the anointed – no room for Bendy Bullys here, just speedboats.

At the end of a PME Working Group held at the UK Defence Academy in December 2015, attendees were asked to give their views on several PME challenges. One such challenge was whether PME should be democratised so that it was not just available for the top 20%; half of those present thought this was the top priority. It is telling that whilst four of the questions asked by the Shrivenham PME Group were rank agnostic, the remaining three were framed around PME for officers.  Or look at the Centre for Army Leadership and its flagship conference. Although the attendees came from a cross-section of ranks, the speakers were CEO’s, authors and a US Navy Captain.  PME very much aimed at officers, not soldiers.  It is no criticism of the work done at the Defence Academy  or the Centre for Army Leadership, but it does speak volumes that the infrastructure and staff of these impressive facility are, with very few exceptions, the sole fiefdom of those holding the Queen’s Commission.

An individual’s length of service should be accompanied by a PME structure that reflects and supports the individual throughout their career, now potentially up to the age of 60. I haven’t detected a shift or realignment in UK PME since service to age 60 was introduced 3 years ago. Neither has PME been adapted for re-joiners, lateral entry and flexible workers. How far can PME afford to lag behind?

SNCOs and Officers who do not make the next rung on the ladder face years in the PME wilderness. What should we think of an organisation that can offer nothing to an individual for more than half their service career? Investing in one group currently means disinvesting in everyone else. Do we know what targeted and structured PME means for those who aren’t the chosen few? Do they get a glimpse into a classroom that remains closed to them; a ‘look what you could have won’ moment? Why would PME not be a viable and suitable experience for those who continue to serve in their current rank? A good Corporal would surely be an even better Corporal if they too received the same PME that a newly-promoted Sergeant gets? Even if promotion is never forthcoming for that individual, the fact the military is prepared to invest in them and see them develop as leaders and followers must be a good thing.

We must also look to those academic organisations that deliver PME. The relationship between the military and the academic provider is key; neither can be complacent. There is little point having the military set a requirement that cannot be aligned with the appropriate academic/educational delivery. It is also beholden on the academic provider to differentiate the content and be innovative in their delivery and even challenging the military to learn in new ways; perhaps even sever the umbilical cord and suggest a life free from PowerPoint?

I fully appreciate that we are asked to be efficient and make savings in everything we do and a proposal that widens the delivery of PME carries with it a cost, but a degree of re-apportionment of resources from the few to the many and being more agile in the way we construct and load our courses could go a long way. Webinars and virtual learning environments mean that lecture theatres or syndicate rooms do not have to be the sole delivery mechanism for PME.  If the conceptual component can’t get smarter at PME then it’s probably not trying hard enough; Tom Cruise will be a pointless answer to something, its just a matter of asking the right question and when we do we’ll all be winners.

Phil has over a decade of military experience, on and off operations, in single service and joint environments.