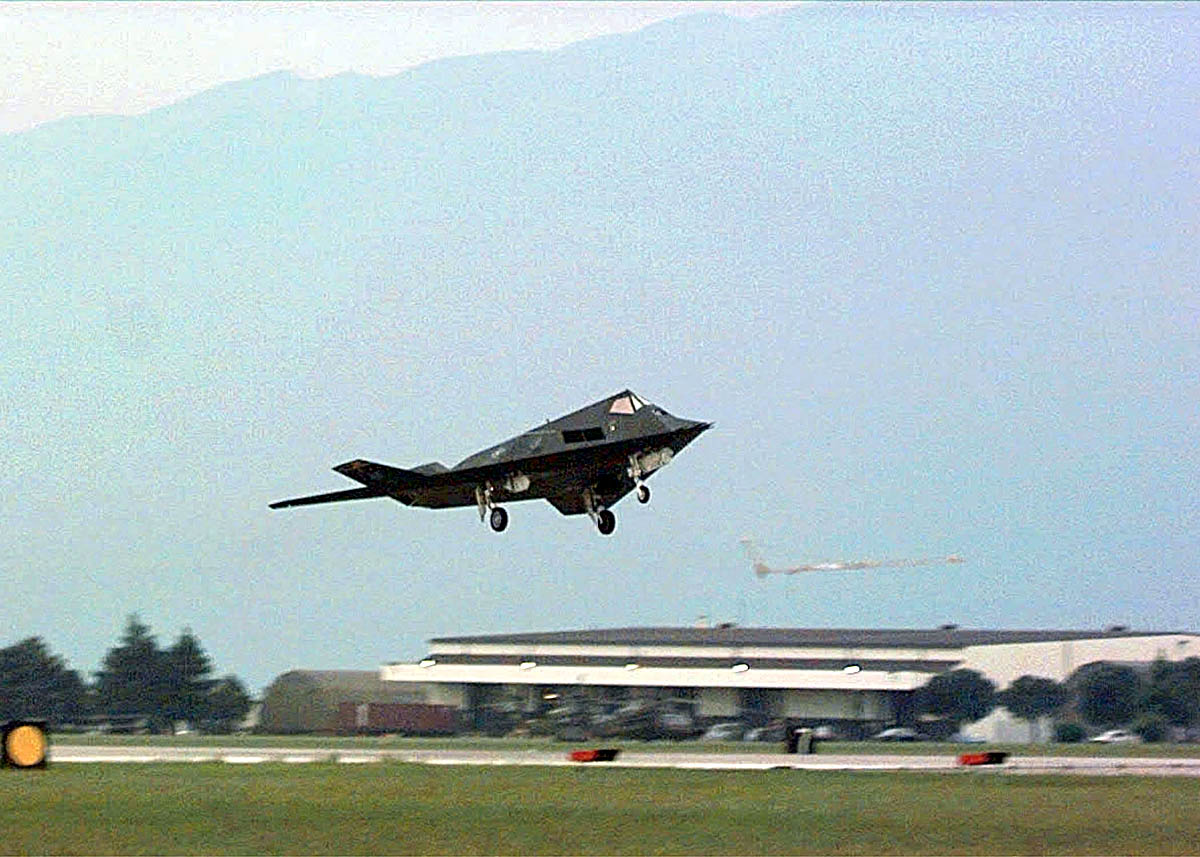 The 24th of March 2019 marks the 20th anniversary of Operation ALLIED FORCE which saw NATO air power used to resolve the humanitarian crisis in Kosovo.  The successful use of air power to coerce Slobodan Milosevic, rather than attritional ground combat, would vindicate early air power theorists such as Douhet, Mitchell and Trenchard.  However, critics could also point to the way air power’s limitations were once again exposed. It also saw renewed debate between soldiers and airmen as to how air power is best employed.  Finally, it foreshadowed developments such as the ubiquitous use of Precision Guided Munitions (PGMs) and Uninhabited Air Vehicles (UAVs).  For these reasons, Operation ALLIED FORCE repays study by anyone interested in air power and this article will provide an overview of the key themes.

Tensions had been simmering in Yugoslavia since the death of President Tito in 1980.  The failure to find a satisfactory post-communist political settlement was exploited by Milosevic who stoked ethnic nationalism to gain power.  He became President of Serbia in 1989 and quickly moved to assert Serbian dominance, leading to the breakup of Yugoslavia1. Croatia and Slovenia declared independence in 1991 with Bosnia erupting into a brutal civil war the following year.  Murder, rape, and forced displacements on a scale not seen in Europe since 1945 demanded an international response and air power was selected as the instrument of choice.  Op DENY FLIGHT prevented Milosevic using his air power against civilians while Op CHESHIRE provided relief for besieged Sarajevo.  In 1995 Op DELIBERATE FORCE, along with Croat and Bosnian ground offensives, forced Milosevic to the negotiating table at Dayton.2 However, as Serbian brutality in Kosovo escalated though the late 1990s, the scene was set for another confrontation with the international community. On 24 March 1999, NATO launched Operation ALLIED FORCE.

On 9 June 1999, only 78 days after the air campaign began, representatives of Serbia and NATO signed a peace agreement in a hangar in Macedonia.  Milosevic agreed to withdraw all his forces from Kosovo which was placed under UN control secured by a 50,000-strong peacekeeping force commanded by a NATO General.  The 863,0003Kosovars who had fled or been deported could return home and begin rebuilding their country.  Serbian military and paramilitary units who had murdered and raped their way across Kosovo were withdrawn.

Serbia had studied NATO’s use of air power in the Gulf and Bosnia carefully and began the conflict with a capable air defence system.  They achieved some early success with SA-3s shooting down an F-117 on 26 March and an F16 on 2 May (both pilots ejected and were recovered safely).  Hundreds of SA-6 and SA-7 were dispersed throughout Serbia and Kosovo which, given the near-zero political appetite for NATO casualties, precluded low level operations.  Despite this, NATO established control of the air above 15000 feet and could strike targets throughout Kosovo and Serbia. During the campaign, NATO destroyed 11 railway bridges, 34 road bridges, 29% of Serbia’s ammunition stockpiles, 57% of petrol reserves, all Serbia’s oil refineries and 10 airfields4 as well as Serbian armoured vehicles and artillery.

Foreshadowing future campaigns, 90% of weapons dropped were PGMs, compared with 69% in DELIBERATE FORCE and only 10% in DESERT STORM5. In this respect, Kosovo completed the demise of the dumb bomb.  ALLIED FORCE also saw the debut of another innovation in air warfare with RQ-1A Predator and Hunter Uninhabited Air Vehicles (UAVs) widely used to collect imagery.  These were particularly useful where low level flight was required and the mission was therefore deemed too risky for manned aircraft, given the political aversion to friendly casualties.

As the campaign developed, life became increasingly difficult in Serbia with power cuts and petrol shortages.  Furthermore, the political elite around Milosevic saw their assets destroyed.  Whilst it is impossible to know exactly what caused Milosevic to capitulate, it is difficult to argue that without the air campaign he would have conceded Kosovo.  As William Arkin put it ‘it was not what we bombed, but that we bombed. The coalition didn’t crumble, the Russians didn’t bail Belgrade out, China was unable to affect the war. At some point, it was clear to Milosevic that he wasn’t going to be able to wait out the bombing, that NATO wasn’t going to go away, and that progressively Serbia was being destroyed, he chose to get the best negotiated settlement he could.’6

Whilst the air campaign played a significant role, it would be naïve to say this was the only factor influencing Milosevic.  He must also have been concerned by the diplomatic pressure building against him.  His decision to step up the ‘ethnic cleansing’ of Kosovo in response to NATO was a catastrophic misjudgment which left him isolated.  Even Serbia’s traditional ally, Russia, joined NATO in pressing for a settlement.  Adding to the pressure, he was indicted as a war criminal by a UN tribunal on 27 May 1999.

Secondly, whilst a ground invasion was explicitly and repeatedly ruled out by Western leaders, the possibility of one may have influenced Milosevic.  NATO certainly had significant numbers of troops in theatre with 8000 in Macedonia under Op ALLIED HARBOUR7 32,000 with SFOR in Bosnia, 5000 in Albania and 2,400 US Marines on three warships in the Adriatic8.  A ground war would present him with an impossible conundrum; so far, his fielded forces had evaded NATO air power by dispersing into forests and villages.  To repel a ground invasion, they would have to concentrate and move, making them vulnerable to NATO air attack.  However, by ruling out a ground invasion, Western leaders failed to fully exploit this conundrum, arguably a failure of strategy.

Critics could also point out that – once again – expectations of air power had been hopelessly over optimistic.  At the outset, policy makers did not expect the campaign to last more than a few days.9 This expectation reflected both an over-estimation of the coercive impact of air power and under-estimation of the importance of Kosovo in the Serbian psyche and politically to Milosevic.  A campaign which was expected to last three days dragged out for nearly three months.  However, much of the blame for this could be placed on NATO’s hesitant and risk-averse political leadership which initially deployed air power in ‘penny packets’ against a limited target set.  This encouraged Milosevic to believe that he could just ‘hunker down’ and wait NATO out.

Finally, whilst air power incurred a lower human cost than a ground campaign, it was not cost free.  On 7 May 1999, a B2 mistakenly bombed the Chinese Embassy and approximately 500 non-combatants were killed by NATO air attacks throughout the campaign.10  Air power may have changed the character of conflict, but the nature of war remains as Clausewitz described it.  War is still violent and friction causes things to go wrong.

ALLIED FORCE saw the rekindling of another enduring debate: that between soldier and airman over the most suitable employment of air power.  The operation commander, General Wes Clarke, wanted the bulk of NATO air power directed against Serbian forces in Kosovo.  His air commander, General Chuck Horner, argued for more strategic infrastructure targets. In this General Horner was right.  Old techniques of dispersion, deception and camouflage made it difficult for NATO aircraft to target Serb forces.  The Serbs were assisted by poor weather and the densely-wooded hills of Kosovo which were very different from the clear skies and open deserts of Iraq.  On 10 June 1999, the US Secretary of State for Defence and Chairman of the Joint Chiefs announced that NATO had destroyed half of Serb artillery and one third of Serb armour.  The Commander of Serb forces in Kosovo claimed, in contrast, that NATO’s attack on his forces had been inconsequential, destroying only 19 armored vehicles and 27 artillery pieces.  Later analysis showed that the Serbian general was closer to the truth and NATO estimates had been wildly over-optimistic.11

In some ways, Operation ALLIED FORCE heralded new innovations in air power with the increased use of PGMs and UAVs.  In others, it rekindled old debates about the utility of air power as an independent military instrument.  It was the latest in a series of campaigns which established air power as the politician’s military instrument of first choice, although it also highlighted how much more effective air power is when used as part of a multi-domain campaign.  The last word though goes to Benjamin Lambeth who wrote in 2001 ‘After years of false promises by its most outspoken prophets, air power has become…a capable instrument of force employment in joint warfare.  Even in the best of circumstances, however, it can never be more effective than the strategy it is intended to support.’12This statement is as true now as it was 20 years ago.

Header Photo: An F-117 Nighthawk lifts off from Aviano Air Base, Italy, for a mission over Kosovo in support of NATO’s Operation Allied Force (U.S. Air Force photo by Senior Airman Mitch Fuqua)