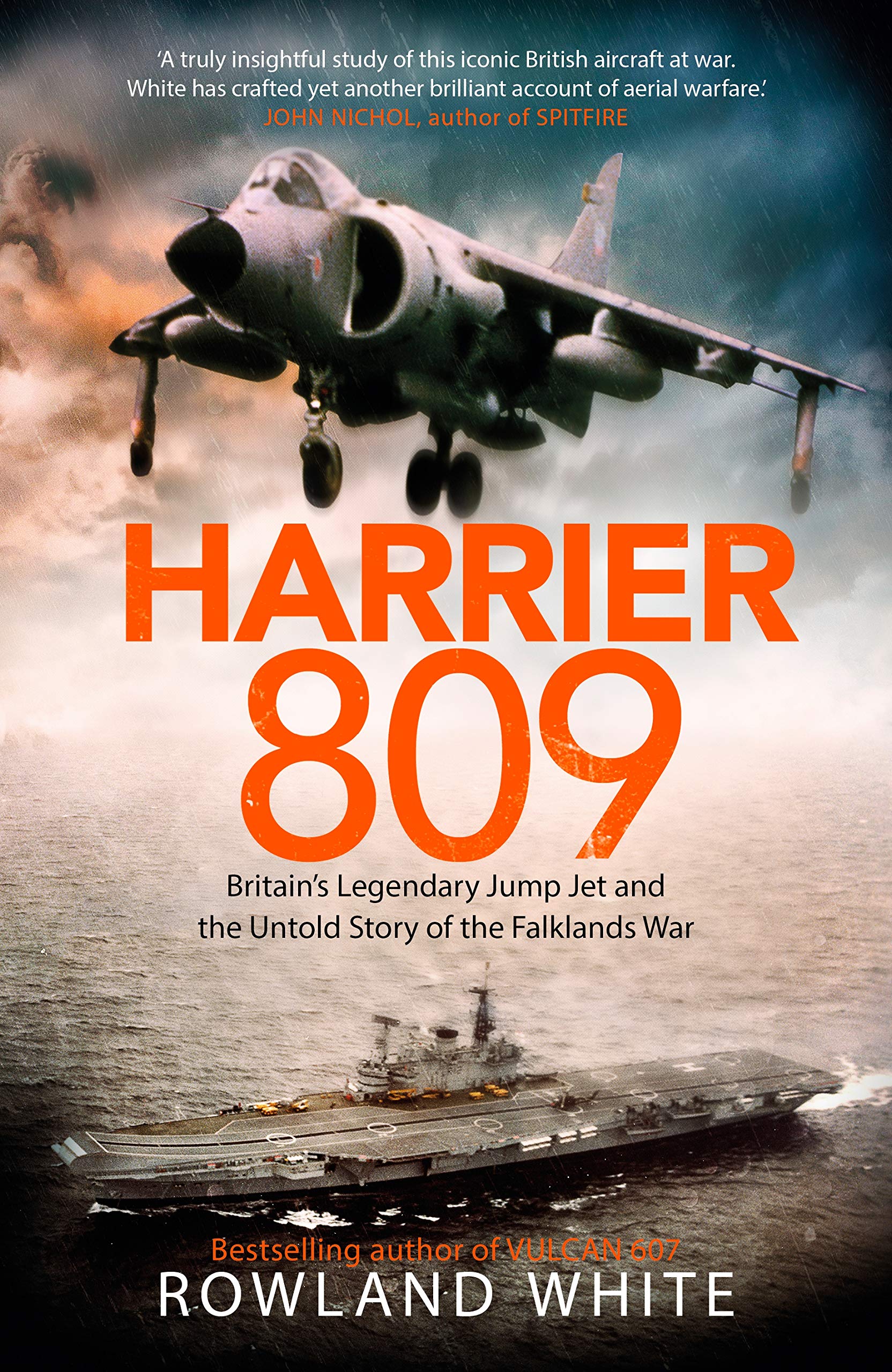 Rowland White is a popular aviation author and Harrier 809 marks his return to the Falklands Conflict after the bestselling Vulcan 607, which chronicled the RAF’s bombing of Port Stanley Airport during Op BLACK BUCK 1.  Like his previous books, Harrier 809 reads more like a thriller than a history book, but unlike a thriller it draws its material from extensive archival research and eye witness accounts rather than the author’s imagination.

The book focuses on 809 Naval Air Squadron (NAS) which was hurriedly put together in April 1982 under the command of Lt Cdr Tim Gedge to provide attrition replacements for the Harrier squadrons embarked with the Task Force.  The author draws heavily on the accounts of Gedge and his colleagues with their thoughts and feelings being given as much emphasis as events, which suits the book’s thriller-like style.  We follow Gedge as, in a peculiarly British way characterised by improvisation and ingenuity, he scratches together a squadron from the aircraft and pilots not already heading south and prepares them for the war to come.  The book also offers the reader a perspective from the pilots of 1(F) Squadron who travelled alongside 809 NAS on MV Atlantic Conveyer.  That ship’s Senior Naval Officer, then Captain (now Admiral Sir Michael) Layard offers another perspective as we follow Atlantic Conveyer from her conversion from container ship to ‘third flattop’ through to her tragic sinking.

Harrier 809 is not concerned solely with the Harrier though.  The book also includes a fascinating narrative of the secretive efforts on mainland South America to provide the Task Force with intelligence on Argentine air movements.  Prominent among these are Op FOLKLORE, the covert deployment of a Canberra PR9 reconnaissance aircraft to Chile and Op PLUM DUFF, an unsuccessful attempt to insert an SAS reconnaissance team into Argentina by Sea King.

While the book is at its most fascinating when describing the diplomatic efforts and secret missions in South America, it is at its most exciting when narrating air combat through the eyes of those who fought it.  This is a story of courage and chance and a shared realisation that the margins for error were very, very narrow.  It brings home the reality that until the land forces were firmly established on their San Carlos beachhead, it really could have gone either way.  It also offers an Argentinian perspective too, with the Harrier pilots’ adversaries fighting a desperate battle as they suffer appalling attrition at the hands of the Harriers and warships, but knowing that the sinking of a single carrier could change the course of the war irrevocably in their favour.

Harrier 809 is not, nor is it intended to be, a comprehensive history.  The narrative is mostly limited to the perspectives of the main characters.  The land war is barely covered and although some key events outside the air war are mentioned (such as the sinking of the Belgrano) others are not.  However, the omission of the catastrophe at Bluff Cove – the largest single loss of British life suffered at the hands of the Argentinian Air Force – is surprising for a book which centres on the air war.

Harrier 809 is a valuable addition to the history of the Falklands Conflict which adds some genuinely new material.  In addition to some previously unpublished photographs, the details and anecdotes drawn from White’s interviews with those who fought enrich the existing literature.  Sharkey Ward insisted there could only be one CO and one Sea Harrier squadron on HMS Invincible and so the elements of 809 were absorbed into his 801 NAS, as elements embarked on HMS Hermes were absorbed onto 800 NAS.  The story of these squadrons has been told in Sharkey Ward’s Sea Harrier Over the Falklands and David Morgan’s Hostile Skies.  809 NAS’s badge (painted over when their Harriers joined HMS Invincible and HMS Hermes) depicts a phoenix rising.  As 809 NAS prepares to rise once again as the UK’s second frontline F-35B Squadron it is a fitting (albeit long overdue) time to tell their 1982 story.  Rowland White has done them justice with this excellent book.