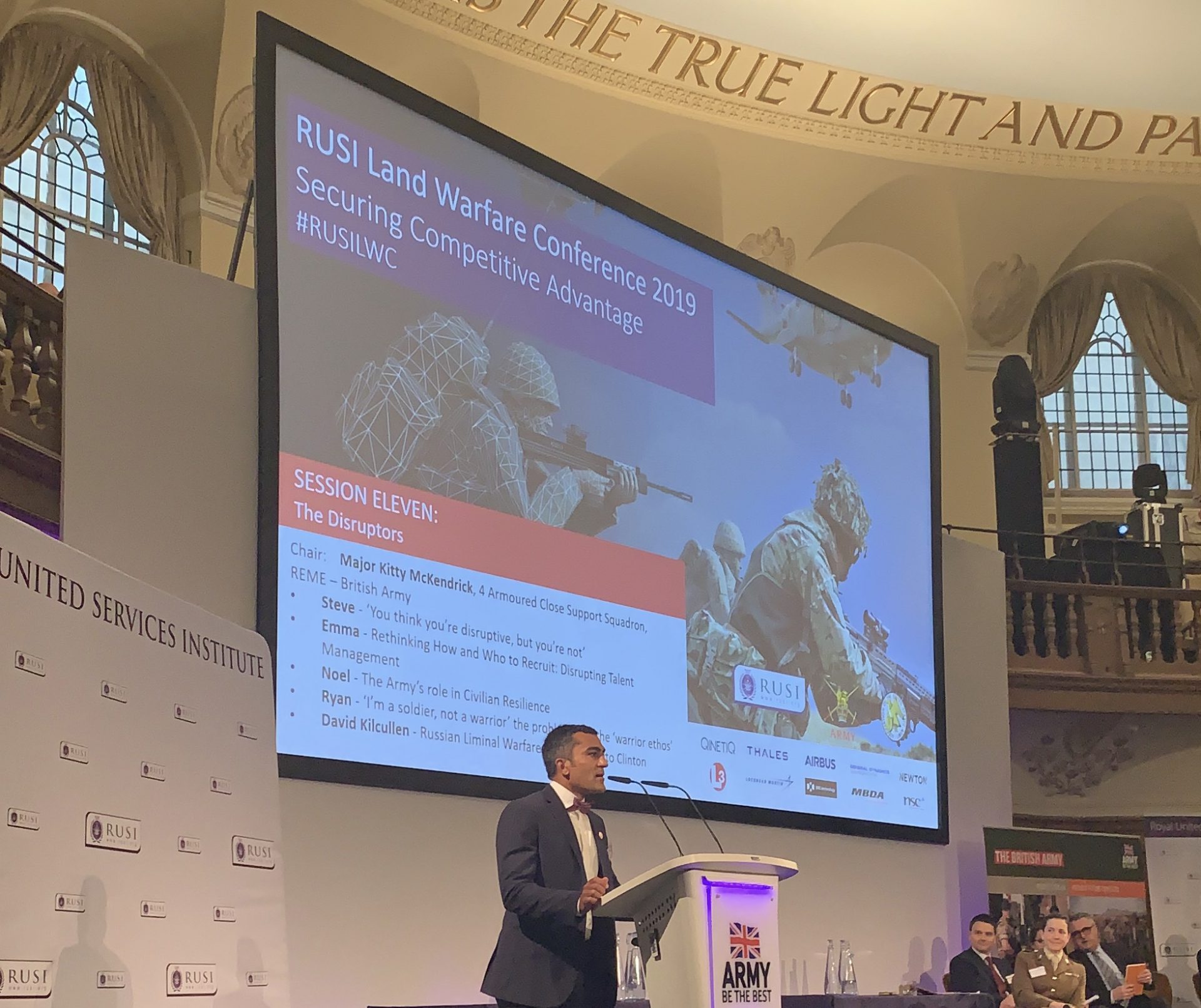 The theme for the 2019 Royal United Services Institute (RUSI) Land Warfare Conference (LWC) was ‘Securing Competitive Advantage’ and we weren’t disappointed.  From predictions of Army’s no longer being judged on the number of tanks they drive, the growing need to develop competitive software, and the changing rules of war, there was lots to chew on even for the most cynical of our readers.  This article highlights some of the major discussion points from the conference (with some ideas for potential articles… **hint hint**) as well as outlining some changes we will argue for in 2020.

The headline military speaker was the Chief of the General Staff (CGS).  In the opening address, General Mark argued that we are in a state of permanent technological revolution and that battlefield geometry is changing to the detriment of our conventional military advantage.  It’s interesting on its own that capabilities such as cyber aren’t seen as conventional already.  Regular Wavell Room readers are likely to agree with his general thrust, but this idea was tested over the course of the conference.

His points weren’t all so simple and there are nuances and rabbit holes to explore.  For example, General Mark argued that the defence community, defined broadly as anyone with an interest, needed a revolution in what we’re thinking about.  For CGS, we need to focus more on how to fight, rather than what to fight with.  In contrast, the view from the Wavell Room is that we need a joint focus on both; especially if we are to counter opponents in the era of revolution that he forecasted.

One of the more impressive speakers at the conference was the head of the Australian Army Land Capability, Major General Kathryn Toohey (@HLCAusArmy), an excellent speaker with excellent ideas.  Toohey, laid out Australia’s view of the world but laboured on the point that defence must be part of a whole government approach.  For Toohey, competition was not about terrain (which fixes the military mind), but about the defence of ideas.  The implication is that we need to think less about how and when we deploy but about the relationships and political alliances we build and how they can be exploited to develop trust.  In UK terminology, she emphasised the ‘whole force’ approach and the need to integrate all arms of state.  Arguably, we are too fixated with generating procedure over understanding outcomes.

Lieutenant General Alain Bouguin, agreed; “combat has always been collaborative… the challenge is to generate collaborative effects and not processes”.  The view from the Wavell Room is that without further discussion, and especially with other government departments, and dare we say civilians, we will simple continue to develop exquisite, but ineffective, processes.

Last year we observed that the Strike Brigade concept was lacking.  This year, Brigadier James Martin, a Strike Brigade Commander, delivered a pitch about highlighting how they were focusing on 400km frontages and 2000km road marches.  Impressive, yes, but believable?   Like last year, we still feel that there is not enough detail in the concept and how it supports division warfighting, or even if it should?  Should Strike be seen as strategic tool in its own right or should it be more fixed into supporting other Army things?  We are yet to form a Wavell Room view on the topic.  Perhaps the Brigadier would like to write for us?

On a similar theme, prototype warfare was introduced in style.  The general idea is that defence should be willing to take risk to bring new equipment (and we would argue doctrine, such as Strike, as well) into service before it is fully ready.  Incidentally, CGS’s Initiatives Group has recently written about this for us.  It was clear from the panel that Russia has been using Syria as a laboratory to test and develop equipment ‘in contact’ giving them, in our view, a fairly decisive edge.

Questions from the floor challenged this.  There was a feeling in the room that the problem isn’t that the British Army doesn’t innovate, rather, that ideas don’t gain traction fast enough.  The Army Innovation Team were quick to write to us and tell us what they are doing to inculcate this mindset.  Our view is that this requires a fundamental shift in the way the Army ‘does’ innovation.  The stove piping of ideas and equipment into small specialist teams is great for in-depth development.  To truly engrain ideas and equipment, we need buy-in from across the Army (and defence) and not just specialist cohorts.  Perhaps the Vanguard Brigade should be formation chosen by default to take new kit with them on operational deployments?  Maybe you disagree?

The most impressive panel of the conference (apart from ours, of course) was the final one.  Chaired by Colonel James Cook (@Cookie2148) and focusing on innovation and adaptability the panel questioned how to effectively innovate in the Army.  This panel was impressive because the speakers used a range of evidence and examples over the polished .ppts and anecdotal comments used by many others.  It was reassuring to know that Defence does have experts in many of the things we enjoy discussing in The Wavell Room.

Are we Getting a Pay Rise?

The Secretary of State, Penny Mordaunt, also addressed the conference.  The headline take-away was her pledge that service personnel ‘should get a living wage’.  This is good news for the junior cohorts of defence and we welcome it.  Like many, however, we question how we’re going to pay for it?  Much will fall out in the detail and the cynical side of the Wavell Room is looking for cuts elsewhere.

Yet much of the Secretary of State’s speech raised more questions than answers.  If CGS spoke about the need to think about new and different ways to fight, Mordaunt was keen to emphasise the need to invest in the warfighting division… err counting tanks?  Acknowledging the need to upgrade our tanks and APCs was welcomed in the room.  There is a balance, of course, between having a hard edge for warfighting and the every-day tools of cyber and new stuff.  Despite the intent, the details are still missing in action and we’re no closer to understanding how, and how many, platforms will be upgraded.  The uncertainty continues.

Previous conferences have laboured the value of the warfighting division, yet the mood music seems to be pushing the Army other ways.  Where do you think the balance is?

The Continuing Need for Change

At the LWC in 2018 the Wavell Room provoked debate by calling for the conference to change.  The general thrust of our argument is that there is a need for discussion groups (both physical and virtual) and more interaction so the conference does not just push messages to a sedentary audience.  Others questioned the balance of military and civilian speakers.   Our view hasn’t changed and we will look for ways to drive increased cross-service engagement.

However, it is worth noting that the Army and RUSI are slowly moving to a more engaging conference.  Last year The Wavell Room ran a side event, Wavell Talks (check out the podcast if you haven’t already!) This year, we made the main stage and we’ve been reliably informed that the Army was scared (our interpretation of ‘worried’) about where we would take the session.

Our session, titled the ‘disruptors’, aimed to break the established norms of Generals talking to the audience and give Wavellers a chance to put their own views forward.  Our speakers didn’t disappoint; from Steve critiquing the thinking power of the room (and read his article); Ryan questioning the validity of warriors; Emma arguing for more intelligent recruitment; Noel highlighting the role of the military in wider society; and David Kilcullen turning our established view of Russia misinformation inside out, we were very proud of them all.

We would absolutely welcome our readers to submit their ideas and to take part in future Wavell Talks.  Perhaps it could be you on the stage next year?

Overall, we were impressed with the range and depth of the conference and would like to thank both RUSI and the Army for allowing us to attend and to pitch our ideas.  We would encourage our readers now to discuss, engage, and write their thoughts.