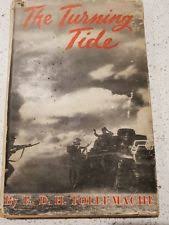 Throughout the Second World War the British Government ensured that the public were informed of what was going on with the nations war effort via newspapers, radio broadcasts and publications.  These publications were either in magazine or short book form.  Perhaps the most honest and relevant for today of these publications is a hardback book by Maj Gen EDH Tollemache DSO MC called “The Turning Tide”.

The book was aimed at the Home Front and serving personnel with the aim of reassuring the population that lessons had been learnt from the early years of the war.  With a few exceptions (The Battle of Britain being one) the British Public had been given seldom opportunity to cheer.  The capture of Singapore, the Blitz and Battle of the Atlantic were all taking a toll on the British psyche.   This publication attempts to reassure the public that their sacrifice of blood and liberties will not be squandered by mistakes being repeated.

Published in 1943 by Butler and Tanner (London) the book served as a summary of the war up to 1943.  The first sentences read “Theyear 1942 should mark for the British Army the end of the distressing period of trial and error in the World War for the overthrow of the Axis Powers.  Our defeats have been many, but they have taught us valuable lessons and our past failures will lead inevitably to future victories.”(p1). This opening sets the tone for the rest, of a very easy to read book.

It pours scorn on the defence of Hong Kong and Singapore – inappropriate garrisons, poor communications, no integrated air land communications etc. It touches on mass  “….Two divisions will always beat one.” (p14). I’m not sure if I should be surprised, or not, that this debate is still raging as we look towards the results of the Modernising Defence Programme.

With 6 chapters in total; Trial and Error, The Man, The Machine, Some Army Innovations, Is there a short cut to victory? and A Nation in Arms”, several stood out to me as still being relevant today.

The “Man” chapter offers insights into the efforts to ensure that the British soldier (From a peace-loving empire) is effective against soldiers from societies that accepted and encourage the militarisation of childhood, such as Nazi Germany with the Hitler Youth.  It even goes as far to say that the surviving British professional soldiers were ill prepared to fight a war of mechanisation and manoeuvre and lacked “Exceptional personnel initiative or particular bodily exertion” i.e. the BEF of 1940 had hedged its bets for unimaginative Trench Warfare (p17).

As one would expect from a publication from 1943 “The Tank” forms the central part of the “The Machine” chapter.  However, the tank is used to explain combined arms operations, the interconnectedness of the modern battlefield through wireless and the third dimension that is air power.  The relevance and similarities of this book were now set in stone by the end of Chapter 3.

The chapter “Some Army Innovations” raised my eyebrows even further.  Sentences from “The Reconnaissance Corps” gave me flash backs to the numerous briefings I’d received on the Strike concept. Replace the requirement of the Soldier to the requirement of the Ajax platform and the similarities are scarily familiar; “……Reconnaissance Corps soldiers must havekeen powers of observations (good optics), good memories (data storage), concrete knowledge of geography (electronic mapping and GPS) describe the surveyed terrain in words (ability to send imagery over a network)” (p37).

The remaining chapters are as per the title with the exception of “A Nation in Arms” which highlights the importance of the Home Guard and civil defence, areas which have been growing in importance across many European countries recently and bares some relevance to Project Henry Wilson.

The book was reviewed by the weekly British propaganda publication “The War Illustrated” in Ed. 156, Jun 1943.  The review, perhaps unsurprisingly, was very positive and made clear two points.  Firstly, that Soldiering is a classless profession, perhaps this was to dampen a rising Socialist narrative of the time.  Secondly, that “….there is no room for the amateur, (a soldier) must be quick thinking, self reliant and supremely confident in his own powers.”  Again I cannot help but think that this sentiment was to dampen any overtures to the apparent senseless loss of life in World War One.

Despite the review of a propaganda book being completed by a propaganda magazine it is surprising that even the review was so scathing of Britain’s recent military misadventures.

The Turning Tide does not shy away from uncomfortable truths such as Dieppe – “Our considerable casualties were regrettable, but many valuable lessons have been learned” (p5).  It acknowledges that equipment must be comparable to an adversary, too at least stand a chance.  This book was published the year after Dieppe and was, for the public, an accurate critique of an Operation which was a tactical, operational and strategic failure which produced few tangible outputs.  I struggle to think of a modern-day example where honesty of failures has been so expediently and openly expressed by a serving soldier in such a short time frame.  The Government initiated Hatton report may of gone some way to addressing the question of Iraq, but only many, many years later.

Throughout its fifty-seven pages the book pulls no punches. It highlights errors and explains what is being done about them.  It is almost as if Britannia wrote her own after action review and addressed each point.

Why do I think this book is important and what can the British Army learn from it?

Control of the press and restriction on freedom of speech are weapons of dictatorial Regimes.  The ability to speak freely, honestly and constructively are the life blood of Democracies.  This book provides a master class in how powerful honesty can be in contesting the narrative without compromising Operational Security.

If you are to read this book at face value and set aside its propaganda value it will likely achieve 2 things.  Firstly, it will explain why we train the way we do.  Secondly, it will make you think of the lessons we (the British Army) have forgotten and are slowly forgetting.  History is starting to rhyme.

“The tempo of war is quickening, targets and opportunities are fleeting reports are urgently required, and orders must go out without delay.” (p35).

Leadership is Language: The Hidden Power of What You Say – and What You Don’t. By L. David Marquet