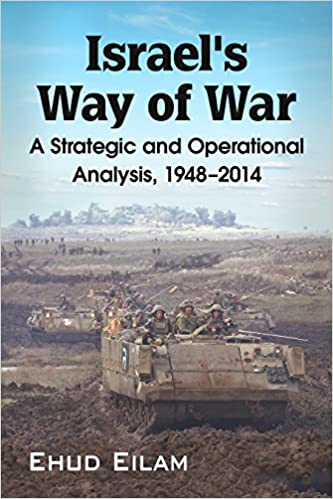 Ehud Eilam sets out in this book to explore the linkages between high and low intensity wars through the battlefield experience of the Israeli Defence Forces (IDF).  The book lends itself to a US and British military readership; the author devotes a chapter to comparing and contrasting the US campaign in Vietnam to the Israeli campaign against Hezbollah.

The book indirectly provides a useful historical and strategic overview of Israeli military history from 1948 onwards.  Extensive use of maps and pictures assist any reader unfamiliar with Israeli history and geography.  Given the book appears aimed at an English-speaking western military audience, a chronological rather than thematic approach to outlining Israel’s military history would have been preferable.  Nevertheless, the author is extremely knowledgeable about his subject and provides a large range of information and insight.

The book is successful in drawing out some of the challenges Israel (and by extension the US and UK militaries) face when chopping and changing between major conventional confrontations, and struggles with sub-State armed groups, often within the same conflicts that the author labels as ‘hybrid wars’.  The difficulty Israel has faced of fighting long, large scale low intensity conflicts, whilst ensuring the core of its military remains equipped and able to fight a conventional war of national survival is prescient for serving UK and US readers.  The author argues that Israel’s weakness in the 1956 high intensity war against Egypt was in part a result of its focus in the mid 1950s on a border war against irregular Palestinian forces.  Similarly, its unpreparedness for the 2006 ‘hybrid’ war in Lebanon was in part a result of the previous focus on low intensity conflict against Palestinians in the West Bank and Gaza strip.  Israel’s formation of ‘Commando Unit 101’ and its Special Forces successor ‘Sayeret Matkal’ for the purpose of dealing with these low intensity conflicts matches the direction of travel for UK and US Special Forces equivalents.

At the end of the book I was struck by the number of issues shared by Israeli and UK / US militaries:  The importance of accurate predictive intelligence, fast decision making, a need to minimise military casualties, a doctrinal reliance on air superiority, as well as the challenges of having to work within coalitions and with local allies.

Although not the author’s most recent book on the Israeli military, I was however left with a number of unanswered questions.  What of the Israeli move toward urban warfare?  What of its development and extensive use of drones and strategic airstrikes outside its borders?  What of Cyber?  What of the policy of deliberate attrition against civilian populations linked to its opponents?  This thought-provoking book has raised queries which may well be covered in the author’s more recent publications.