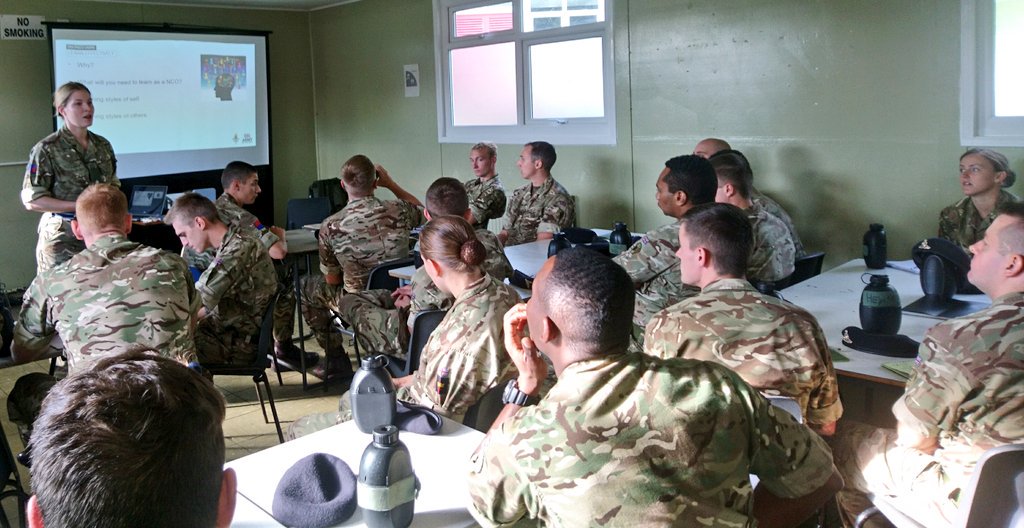 The British military needs a Learning Culture. This statement may confuse you, given the numerous articles on Professional Military Education (PME). Unfortunately, most of it misses the point, assuming that Conceptual component strategies and policies can meet institutional learning needs through the delivery of discrete education interventions; an example of this is the 2016 RN officers’ Through Life Education Pathway1 (the promised Rating’s pathway (para 9634) has failed to materialise). What we actually seek is the Learning Organisation; Petraeus called for such in the introduction to FM3-24 (above). Unfortunately, the British military silos that seek Senge’s nirvana (Education and Training Services (Army); Training Management (RN); Personnel Training (RAF)) are symptomatic of the cultural void they seek to fill: they are Professional bureaucratic answers to the problem of managing and measuring force development.

Fundamentally, these strategies and policies attempt to match ill-defined Ends with the available Means, without articulating the Ways. Learning is a behaviour, and behaviours are dictated by cultures. Therefore, we need to understand why a learning culture is invaluable to the military, and then think about how it can be achieved. First though, we need to know what we mean by learning.

Learning is “the acquisition of knowledge, skill or attitude (KSA) through study, experience or being taught, resulting in positive performance change”. It is active, cognitive, reflective and practiced, as Kolb, Honey and Mumford have taught us; we have to do all four if positive learning transfer (“the ability of a learner to successfully apply the behaviour, knowledge and skills acquired in a learning event”) is to be achieved. In terms of the UK military, a shift is required in our understanding of learning: it is not of the conceptual Component, but rather the foundation for all activity. A simple read across of training documentation is evidence of this: Knowledge underpins the Conceptual component; Skill the Physical; and Attitude the Moral.

Generating a learning culture is key to creating the agile, proactive and responsive force of tomorrow:

“the demand of discipline and rigid respect for one’s superiors – on which cohesion in battle depends -– are antithetical to the processes of adaptation, which require a willingness on the part of subordinates to question the revealed wisdom of their superiors.”2

This may seem like old hat. But let’s put it another way. On the left are the characteristics of a Learning Organisation; on the right, those of Mission Command:

Convinced yet? Learning, particularly PME, is the foundation point of Mission Command. It is no coincidence that great commanders have tended to be voracious readers, and that the top US and German commanders of WW2 were PME readers, writers and instructors. Gen Mattis’ viral email and later required reading is proof positive of this approach: his vision was clear, articulated a shared understanding and knowledge-base, and promoted professional mastery.

More than that, developing a learning organisation and culture supports the transition from restrictive, output-focussed Professional Bureaucracies to more manoeuvrable, outcome-oriented Adhocracies; more on this at a later date. It would also recognise the value individuals bring to defence, supporting motivation and retention: Gen Y and Z demand it.

So where are we?

Rommel famously quipped that “the British write some of the best doctrine in the world; it is fortunate their officers do not read it”. The problem resides in a culture that does not incentivise nor democratise scholarship. Indeed, the British military is almost unique in historically scorning soldier-scholars as dangerous intellectuals, except in moments of dire need: in 1755, Wolfe noted that ‘Our military education is by far the worst in Europe’3(at the time, he was engaged in overhauling battalion TTPs having been denied the opportunity to visit Prussian and French military schools); pre WW1, Churchill and Corbett struggled to make headway against the RN’s sea-first conception of officership, eventually establishing a Staff Corps and The Naval Review (the latter currently dwindling in membership). Plus ca change.

Plenty of stick, but no carrot?

Think on this: The New Employment Model punished those undertaking advanced full-time study by replacing OJARs with “academic” reporting; what officer wishes to ‘lose’ a year vis a vis their competition? PME is linked explicitly to discrete career courses, injected at pre-determined points (on assignment/promotion), rather than a continuous evolution; which is why the RN require a “Critical Thinking Skills Course” prior to ACSC and the RM an “Advanced Amphibious Warfare Course” prior to ISCS(L).4 Moreover, PME is reserved almost exclusively for OF ranks: unlike the US, UK PME is not for all, with learning opportunities reserved for the top 10%. Meanwhile, the UK has retained a system familiar to Wellington and shut-down its own higher education establishment: the majority of its officers are white, male, middle-class, recruited directly from university or high-school/Sixth form college, and benefit from one of the most stratified education systems in the western world.5Those officers that do make the leap from other ranks to officer rarely progress to the senior echelons; Brigadier Ged Salzano RM being one of the few. The days when every soldier carried “a marshal’s baton in his knapsack” are well and truly dead.

So what can be done?

It does not need to be this way. The US, France and Germany boast University-style establishments (Annapolis and Westpoint, St Cyr and the Ecole Navale, or Munich and Hamburg) and actively promote learning at all levels. Whilst at both RMAS and BRNC, I actively advocated for just such a system: my academic tutors saw the value and logic; my colleagues and military instructors, not so much.6

There are green shoots: the recruitment process for 77th Brigade is proof positive of attempts to hire-in expertise and utilise a wire network of professional mastership, rather than the bureaucratic model. CHACR and Centre for Army Leadership provide top-level cognitive sponsorship and championship of PME. But these are discrete, existing concurrently rather than cooperatively. More could be done by enthusiastically embracing strategies to promote learning culture, rather than education; the latter is a product of the former. We also have, in the shape of RUSI, the world’s pre-eminent Defence and Security think-tank; but how many officers have ever set foot inside 61 Whitehall?

So, what can be done?

Here are a few thoughts:

This is by no means an exhaustive list, nor are the scribblings above the last word on the matter. However, it is a starting point to re-orientate the ever-evolving and ongoing discussion of how to build and prepare the military of the future. At our core, humans are learning beings. It is only right that we place that advantage at the centre of our military, through intellectual discipline.