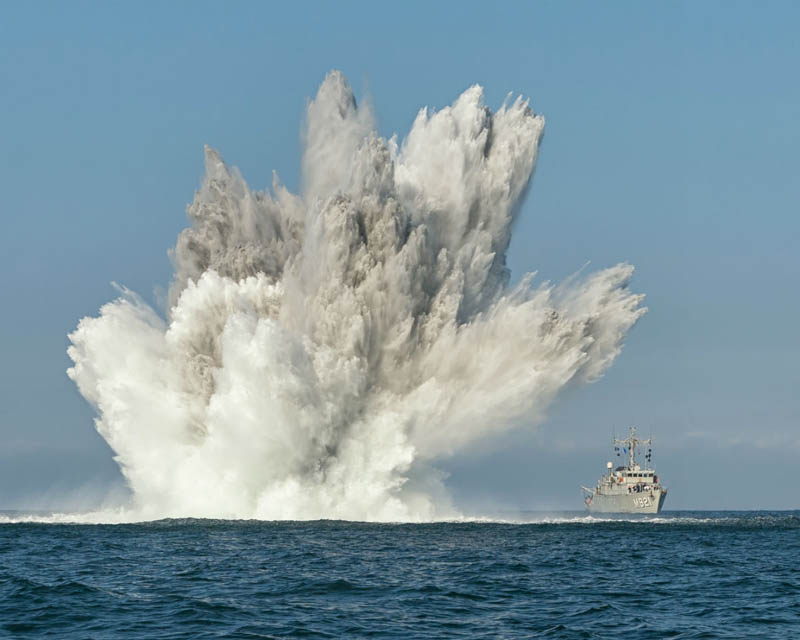 Mine Warfare in Asia-Pacific Naval Theatre: A Clear and Present Danger

In contemporary academic and military strategic discourse about the future of naval warfare and balance in the Asia-Pacific, discussion and debate is often drawn to big-ticket and highly visible naval surface units. Aircraft carriers and their escorting surface units or on the role of future unmanned naval drone technology and long-ranged anti-ship missile weaponry are prominent. A naval military asset and form of warfare has however been conspicuously absent and given insufficient attention by regional military observers and naval staff: that of naval mines and general mine warfare/countermeasures.

Mine Warfare: An Historic Form of Warfare

Naval mines are one of the oldest forms of naval weaponry devised by humans. The naval mine is at once the cheapest, and most passively deployed weapon in any navy’s arsenal, and yet oftentimes one of its most deadly in terms of sheer firepower and outsized influence it has on any theatre of combat it is used in. Naval mines serve as the most effective method of denying and corralling a potential naval adversary precious maritime space in a theatre to maneouvre in freely without worry of damage, as well as tying down considerable naval forces in said region to painstakingly sweep its desired operational waters for mines before deploying units in the sanitised area. The power of the naval mine even in modern naval warfare is demonstrated by a sobering piece of statistic: of 18 warships lost or seriously damaged since WWII due to hostile action, 14 were struck by sea mines.

Mine warfare is one of the under-discussed and under-appreciated power multipliers of Chinese naval power in the Asia-Pacific, particularly in the Western Pacific Approaches, South China Sea and Taiwan Straits. Mine warfare, and the technologies required for the building and deployment of hi-tech mines with smart sensory capabilities and increased firepower, constitute an important asset for China’s People’s Liberation Army-Navy (PLAN) to skew the balance of power in any potential maritime theatre of conflict in favour of itself against a qualitatively superior foe, commonly referred to as an “Assassin’s Mace” weapon. Mine warfare lends itself extremely well to Chinese military and naval doctrine of Anti-Area/Access Denial (A2AD), whereby the goal was to achieve local superiority in a given theatre of combat not by destroying an enemy challenging force, but by denying them entry into the area from the start until it is too late for them to intervene in any Chinese military action or conquest in the region.

How To Kill A Carrier

Whilst the role of Chinese “carrier killing” anti-ship ballistic missiles and its newfound carrier aviation capability has been the main focus of discussion for the exercising of Chinese A2AD strategic doctrine on the high seas, the role of Chinese offensive/defensive mine laying warfare has largely slipped under the radar both in academic and military circles. This constitutes a clear and present danger of strategic and tactical oversight by regional Asia-Pacific naval powers, and is a blind spot that China’s PLAN has been quick to recognise and capitalise on accordingly.

The PLAN had garnered important lessons from the 1991 First Gulf War, where two US naval warships operating in the Persian Gulf were damaged by Iraqi mines laid prior to Operation Desert Storm. Coalition minesweeping operations were also observed by Chinese military strategists in their post-Gulf War analysis to be slow and arduous, with even modern sonar systems still hindered by false targets from sea-floor clutter, further complicating and delaying the entire minesweeping operation.

Chinese military strategists took note of the outsized impact of what was described as a limited and rudimentary mine warfare campaign by the Iraqi Navy in the face of overwhelming numbers, using only the most basic of influence mines, with an eye to apply the same tactics and techniques only with better technology and on a larger scale. In the past decades, the PLAN has taken pains to develop and stockpile naval mines of increasing sophistication, with some 50 thousand mines of various capabilities stockpiled as far back as 2009. Efforts have also been placed in developing mine deployment systems, using not just surface naval mine laying assets but also aircraft-deployed parachute mine systems and rocket mine deployment. Submarine mine deployment has been particularly earmarked for offensive mine warfare due to their stealthy characteristics and long operational range.

The Potential Offered By Mass

Given improvements and applications of “smart” and “dumb” naval mines, deployed en masse by multiple naval surface, aerial and undersea platforms, the PLAN has a potent tool to not only effectively bog down and deny vast swathes of maritime areas to any potential naval adversary’s free navigation, but also channel enemy naval vessels into naval “killzones” where PLAN assets can overwhelm and destroy them with local numerical superiority and denial of freedom to manoeuvre and evade for enemy forces. It cannot be discounted that China could always potentially escalate rhetoric of unilateral claiming of territorial sovereignty over maritime regions such as the infamous “nine dash line” demarcating the entire South China Sea through the usage of naval mines, which could prove highly effective in cutting all sea lines of communications and trade that are not Chinese-approved in the region, leaving only Chinese-controlled “cordon sanitaire” sea lanes accessible for use by commercial and naval vessels it approves of.

The PLAN is currently the largest operator of minesweepers and naval mines in the Indo-Pacific. As of 2021 it has some 36 minesweepers (7 of them built from the 2000s onwards) in operation and much of its 500-strong active fleet being capable of laying naval mines. In comparison, regional navies including that of the US have outdated and numerically inferior minesweeping vessel flotillas. The Japanese Maritime Self-Defense Force (JMDSF) has 26 minesweepers, of which only 3 are newly built after 2014. The South Korean Navy (ROKN) has 11 active minesweepers, of which only 3 are newly built in the 2000s. Most shockingly, the US Navy (USN) has only four minesweepers forward-deployed to the Seventh Fleet out of Sasebo, Japan. For perspective, this is the same amount as the Republic of Singapore Navy (RSN) possesses in its fleet, many times smaller than the USN. These four vessels are at least 30 years old, late 1980s vintage, and half of the US Navy’s total specialist minesweeping fleet deployed globally in 2021.

Numbers AND Quality: A Formidable Mix

In summary, China has a numerical and qualitative superiority in all areas of naval mine warfare for the Indo-Pacific theatre, be it offensive/defensive mine deployments, or minesweeping capabilities to keep its own waters clear of enemy mines. Mine warfare in the Indo-Pacific theatre is not a theoretical possibility, but a clear and present danger that has every possibility of rapid resurgence and deployment in the region by the PLAN in any future naval escalation on the high seas.

It is therefore of paramount importance that navies seeking to operate in the ever-contested maritime commons of the Indo-Pacific, particularly the South China Sea/Taiwan Straits/Western Pacific recognise the asymmetrical and continuous leverage of mine warfare in these waters, as well as modernise and beef up their naval minesweeping capabilities accordingly. The larger fortunes of naval warfare in the Indo-Pacific may very well be decided not by large capital fleet units or advanced, long-ranged weaponry across vast expanses of ocean, but by the outsized impact and influence of smartly-deployed naval mines in the face of inadequate minesweeping capabilities.