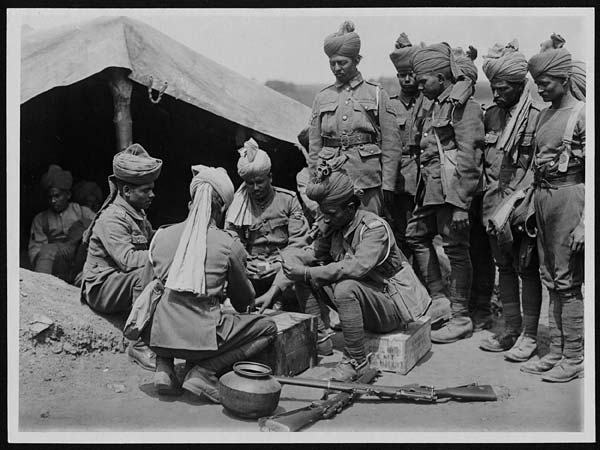 During their occupation of India, the British built one of the most effective indigenous military forces in history, the British Indian Army. This is not to say it was ever the equal in modern combat of a western army. On the Western Front in 1914-15, it proved inadequate and had to be withdrawn and its performance in World War II was mixed. But, for a hundred years, the British Indian Army proved more than capable of defeating tribal raiders and incipient rebellions, and that is what we want local, anti-insurgent force to do.  What made it so effective was that, after the Mutiny showed the dangers of forcing social change on a resistant society, the British were determined to work with the culture, not against it.  The challenge was to blend British control and western military technology, logistics, and weaponry with local cultural considerations. This article examines the British Indian Army’s approach and uses it to suggest how a modern military could use the same approach.

The first great challenge to a modern military attempting to use this model would be permissions. How can a military get permission to raise a force composed largely of local fighters under foreign command from a government likely protective of its sovereignty.  A military could provide financial incentives to the government whilst also basing forces away from the capital so that it poses no danger of a coup. Additionally, the threat of withdrawing forces and funding from the host nation are also option available to come to an agreed approach.

Presuming permissions are granted, the first step would be recruitment. Let’s look to the British Indian Army for guidance.  Well educated, upwardly mobile locals who might be resentful of foreign interference are excluded. Instead, recruitment among tribes and clans who are the traditional enemies of the groups to which the insurgents belong. The recruits are paid far better that they could get working elsewhere, and some of their pay goes home, not straight to the recruit. Payments are made to recruits’ tribal leaders, buttressing their positions, but it is made clear that the tribal leader’s access to funds depends on loyalty to the new force. No loyalty, no money, no recruitment from his tribe, no money sent home. These payments are not bribes in the western sense. Tribal leaders use funds on themselves, it is true, but they distribute the bulk of them to their followers to maintain their loyalty.

We should not kid ourselves. The tribes and clans we pay will support us only as long and the money flows and we look like winners. To quote an old India hand, “Afghan loyalty is not for sale. It can, however, be rented.”

Like the British Indian Army, the internal organisation of our unit should follow family, clan, and tribal loyalty by assigning related people to a company. Serving with their relations helps keep them in line and makes them more likely to remain loyal to each other. Within the battalion, we will mix a company from a given clan/tribe with companies drawn from their tribal adversaries, making it more difficult for a rebellion or mutiny to take hold.

Like the British Indian Army, we will provide small arms and other company level weaponry of simple design. Russian weaponry is ideal. Russian weapons are simple, take little maintenance, and work without fussy cleaning. More advanced weaponry can be kept in the hands of the assisting nation’s military personnel attached to the unit.

In nations where religion is a major cultural factor, our soldiers should be extremely sensitive to wider religious traditions. Only culturally appropriate food will be permitted on base, and where appropriate, alcohol will be banned.

Key members of the officer corps should be drawn from current and former western military personnel, under long term contracts, and subject to military justice. They should be compensated for the loss of “career enhancing assignments” with promotions, bonuses, and retirement options.  Intense language training must be required for all personnel, the local language for the officers, and English for the troops. Besides making it easier to communicate, proficiency in English is a life enhancing skill for locals and would potentially be seen as such.

To provide upward mobility for promising soldiers, we should set up a system analogous to the Viceroy Commissioned Officer of the British Indian Army. We should pay them well and set up ways to buttress their status (uniforms, entry into the officer and NCO messes).

Western personnel must maintain control of all unit funds, supplies, and equipment. We must remain cognisant that the primary loyalty of our troops and native officers is to their families, clans, and tribes, whilst understanding that what westerners may identify as corruption is often the way some societies operate. If we find it happening, we stop it, fine the offenders, make deductions from the tribal payments, but must not act morally superior.

Since policy will likely prevent us from recruiting well educated locals to form a staff, staff personnel will have to be western, except for native intelligence officers who are likely to be central for success. Intelligence officers could be offered very long term and highly compensated contracts. Like the British Indian Army officers seconded to the government, their job would be to get to know their regions intimately which can’t be done during shorter time periods.

With the force technically part of the local armed forces, and combat losses restricted to natives and a small number of western volunteers, the national media and public interest is likely to be significant reduced.  With little interest in the war at home, press coverage from the home country will be limited, and without public pressure, politicians are unlikely to interfere with military operations based on public perception.

Jeffrey Greenhut has a doctorate in history with a
speciality in military history, and was a program director at the United States
Army Center of Military History. He has taught at many universities and has
published in numerous professional and scholarly journals.
Jeffrey was also a soldier, who served in Vietnam, Somalia,
Panama during Operation Just Cause, and finally as a team leader with the
Kuwait Task Force during Operation Desert Storm.