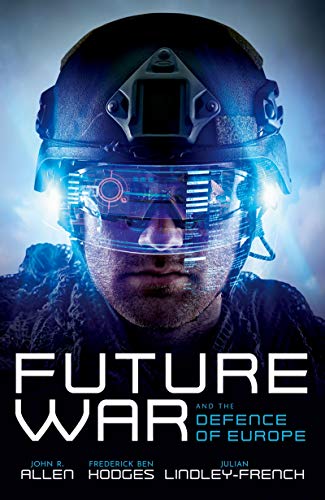 Can Europe defend itself?  The answer presented in this book is a pretty firm ‘no’.

‘Future War’ starts with the worst-case scenario of integrated Chinese and Russian action: cyber-attacks against HMS Queen Elizabeth and a hypersonic missile launched against the US Navy in the Pacific.  American reinforcements destined for Europe are held at sea because of a lack of offloading processes and experience, and are unable to defend against a Russian ground invasion.  Europe is defeated.

The authors’ primary arguments are that COVID19 has accelerated the trends already prominent in the security debate, and that new technologies such as Artificial Intelligence (AI) will make Europe more vulnerable.  This is the crux of the book’s scenario that leads to the joint attack in 2030.  But ‘Future War’ is not simply a fictional story.  The authors employ a narrative, but pick out key themes to examine in detail and discuss their implications.  From Cyber and AI to political integration and the role of the European Union in NATO, ‘Future War’ covers a lot of ground in a compelling and engaging analysis.

The book doesn’t hold much back in its critique of both Europe and America.  It offers a blunt and honest appraisal of the current security structures and how they may develop towards 2030.  Two of the authors are retired American Generals: John Allen and Ben Hodges.  It’s unusual for American Officers to put their name to a work which critiques American politics to the extent they do.  The authors rarely pull punches in their analysis of both the political will and effectiveness of both European and American armed forces: in particular Britain and France.

One of the key components of Future War’s argument is that COVID19 will be a historical hinge point.  The authors believe that Europe’s society will demand greater investment in human security to recover from the virus, undermining the will to spend on defence.  As conventional capabilities reduce and Europe’s armed forces are hollowed out, they argue that the threshold for a nuclear response will lower because there are no other options.   Europe’s lack of interest in defence means that American commitment to the continent wanes, and previously assumed guarantees of security are undermined.  Even if there is no direct war, it is argued that by 2030 Europe’s posture will be coerced by an increasingly aggressive China.  Russia, hurt by economic sanctions, will conclude that only external aggression can shore up its internal politics.  Overly reassured by decades of peace and a belief in legislating war away, Europe is not ready to defend itself.

For any defence professional, this book offers detailed assessments of different but interlocking themes.  There are chapters on the northern and eastern flanks, the Mediterranean, China, and hyperwar (loosely defined as computer led).  Subjectively more interesting than the geographic analysis are the chapters which focus on specific questions.  For example, can NATO still defend Europe?  The answer is probably not, not least, the authors argue, because NATO is an alliance more aligned to deterrence than warfighting.  Can Europe defend Europe?  The authors pronounce an unequivocal ‘no’.

Looking at one of these themes in detail: hyperwar.  The authors identify the rise of 5G networks and cyber as a dreadnaught moment.  In 1906 HMS Dreadnought was launched making the Royal Navy a globally dominant sea power, and every other battleship obsolete.  In 2030, technology provides the dreadnaught moment.  The authors present a vision of AI commanded attack drones, learning and adapting, backed by hypersonic missiles and more traditional assets.  3D printers are employed to create a mass of drones at the critical point.  It’s a terrifying vision removed from more narrow perspectives of how to fight.  Yet, only the Americans and Chinese are seriously investing in AI, rendering European militaries obsolete.  The writers offer Europe a stark choice to invest in defence or be defeated.  The ‘hard truth’, to the authors however, is that no nation in Europe has a military minded view of AI.

Arguably the authors overplay their hand in this critique.  They present a one-sided vision of Chinese and Russian dominance.  They point to American investment through DARPA, yet undermine the efforts of others.  There could be an element of presentism in this assessment; US multidomain doctrine and spending plans retain significant value on rocket artillery and conventional assets that they critique Europeans for maintaining.  Has anyone stopped to consider that the breakthrough might actually happen in Paris or London?  Both British and French military leaders are certainly making the right noises about AI and drones, but the authors lay more general critique at the feet of government and public interest.

‘Future War’ examines the defence of Europe through the prism of a worst-case future scenario.  However, at times it feels like an in-depth critique of Britain, with some French anecdotes thrown in.  Perhaps this is because of the availability of English language sources and the generally open nature of the British defence debate.  If anything, this should be taken in Britain as a compliment to the depth of the US-UK relationship.  Especially as the authors cite examples of British policy as the way forward.

In one part of the book they explore a scenario in which Russia invades, but Europe lacks the mass to launch a counter attack; the very mass that the bits of Europe they don’t consider, such as Ukraine and Poland, offer NATO.  They also ignore the contribution made by European nations to American military operations in places such as Afghanistan.

The other enduring theme of this book is defence spending mirroring the narrative of former President Trump and more hawkish European voices.  It is in this narrative that the authors lay significant criticism on European nations for not investing and forecast that investment will not rise to 2030.  This is not entirely true, of course.  The book attacks the UK for not increasing spending in the Integrated Review, but seemingly misses the significant increase in defence spending announced at around the time the book went to print.  Yet, the broader point is probably true and European increases tend to fade into insignificance against the programmes of investment they analyse in other nations.  And especially so when judged against the cost of personnel versus the money spent on technology.

At its heart, however, this book is a call to arms for Europe.  Perhaps that shouldn’t be surprising given one of its authors, General Ben Hodges, is a former Commander of US Forces in Europe.  Hodges is widely respected across European military circles and often delivered critical messages about European military capability and the need for greater investment.  An underlying theme is that America will be committed elsewhere and won’t be able to defend Europe.  As such, it could easily be seen as being as being more about American foreign policy than the defence of Europe.  Without increased European investment in defence, then, the unipolar world is permanently undermined and America’s challenges are worsened.

‘Future War’ also considers the security impact of China on Europe.  They identify China as the main challenge to the world’s democracies, not least because the West is now dependent on Chinese exports.  In the post COVID19 world they argue that Chinese investment, largely through the belt and road initiative but also with cheaper technology exports, will become more attractive.  This is because internal European investment will fall and taxes will rise with the need to pay the economic and social costs of the pandemic.  This will increase Chinese influence in Europe, creating a strategic dilemma.  Europeans, they argue, have moved to a values based foreign policy, yet must choose between the Chinese investment needed to meet social costs, or opposing the Chinese internal crackdown on human rights.

But what to do?

The authors argue for a change in mindset to see war as a realistic probability and to end strategic naivety.  Europe should no longer assume that the United States’ primary security purpose is to defend Europe and step up to assist.  Other recommendations require deeper integration, for example, a new strategy towards Russia which makes clear the costs of future adventurism.  Given the recent strategic paralysis on the Nord Stream 2 pipeline this seems unlikely.  Further integration to 2030 also seems unlikely because of BREXIT, but integration and faster response forces are seen as being a critical part of the solution.  Whilst this seems negative, the authors offer a more optimistic vision of enhanced European Union and NATO coordination and exercises which test the alliance to failure, enabling better preparations.

The book ends with a more positive scenario for the defence of Europe in 2030.  HMS Queen Elizabeth is protected by AI enabled and layered cyber defences.  American forces transit into Europe using high speed railway lines, protected by autonomous robots.  A joint American and European strategy stops Russia and China from co-operating, enabling Europe to be defended.

‘Future War’ is excellent.  This review has over simplified deep and nuanced arguments but the text is in-depth, engaging, and brilliant.  It offers both a strategic and tactical insight into high end warfighting in 2030 and how it might play out.  It’s neither fiction nor non-fiction, but a forecast of events stemming from events today.  As such, it is recommended for all those with interest in European security.