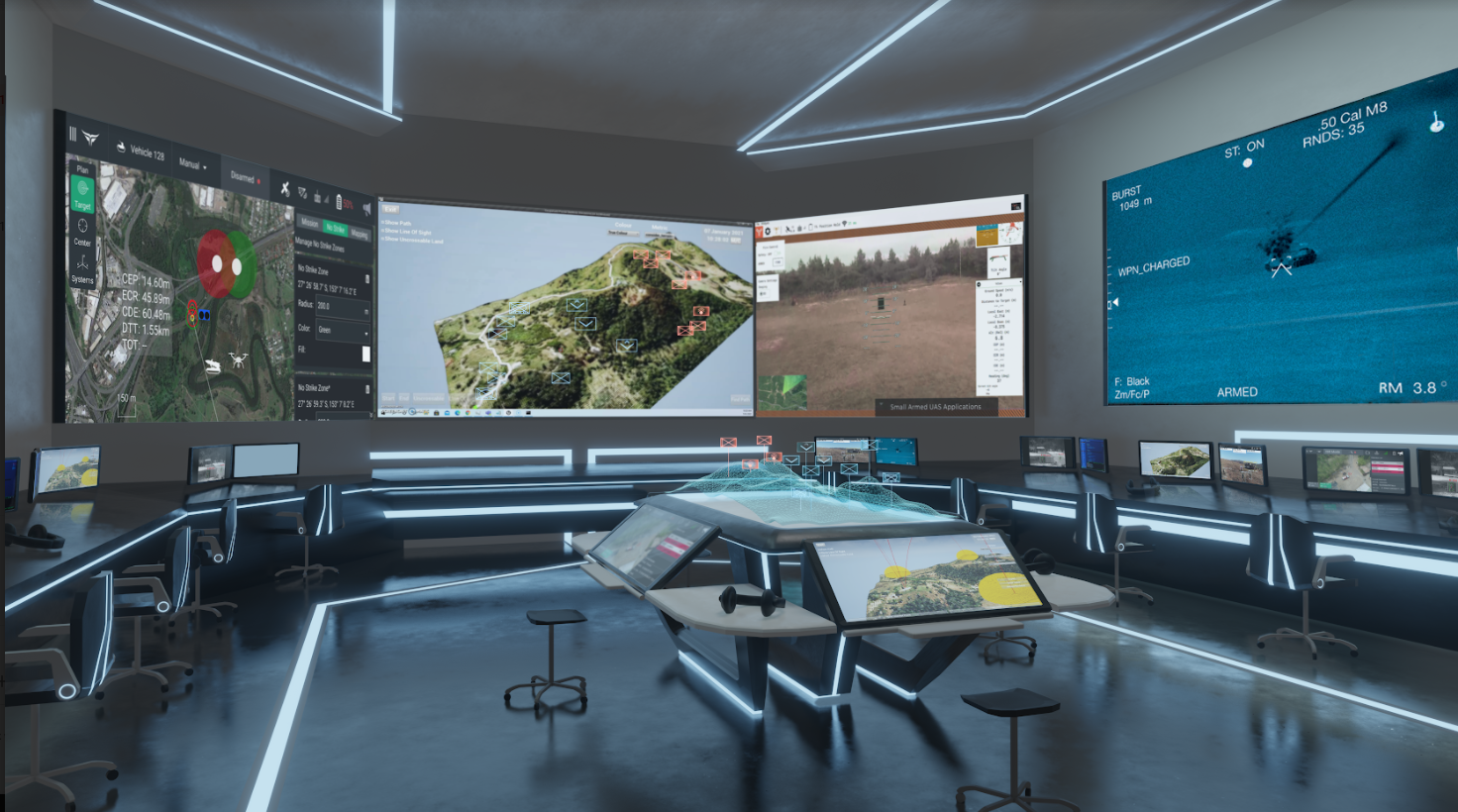 Masquerade for a Screen

In the Darwin control room a series of red texts and symbols appear on the situation display, indicating a sudden increase in enemy transmissions. On the main map screen, within the town, two pulsing yellow dots begin to move away from the red symbol indicating an Echthros Marine company headquarters location and down the road that leads south towards the centre of the island. A voice speaks authoritatively; “Turn them red” and a tracking operator enters the code that identifies the unknown moving vehicles as ‘enemy’. Another, faster moving red symbol appears near the initial detections and moves south towards the RAS force. The acoustic sensor array has detected an enemy drones. It will be some time before the vehicles might reach a point where they might detect one of the robotic platforms, but the drone won’t take long. Operators and pilots turn towards the raised console of the one-star in command. A shake of the head to the room reinforces the plan to rely on low signature systems for as long as possible. “Perch the drones, park the Toyota, Polys and Xtrak’s , cut the smoke and launch a couple of acoustic sniffers”.

Behind the fake Toyota, the two following UGV slow, turn off the track and stop amidst the scrub and brushes. Once halted, even in daylight, their shape-and-heat-disguising camouflage in brown, green and grey ‘foam fingers’ make them appear non-descript and anonymous – perhaps piles of rubbish. In the darkness amongst the foliage, they are well hidden. The fake vehicle is pulled over into the ditch. Several hundred metres ahead, their reconnaissance drone, reverting to human control from Australia, extends its landing legs and settles gently onto a palm tree.

Back in a clearing near the beach, on one of the MAVOC platforms a panel swings open and a streamlined cylindrical object is fired upwards, accelerating high into the night sky, pushed by a rocket motor that then detaches, spent. As the cylinder slows at the apex of its trajectory, wings pop, three rods swing out from its nose and its descent becomes a shallow dive. As its tiny electronic brain locates itself in the sky it steers the little glider towards its assigned hunting ground. The Sondart7 knows its prey. Rather, it knows the sound of its prey. Moments before launch it was programmed with an acoustic signature, delivered as data package on the mesh radio targeting network and assembled from the sounds heard by the microphones embedded in the ground ahead of the force.

The little plastic dart begins to hunt, seeking to match the prey signature with the input from the three acutely sensitive microphones on the probes in its nose. When it determines the rough direction of the approaching Echthros drone, its first pyrotechnic booster ignites, and it climbs steeply to be high above where it heard its target. As the motor exhausts the dart topples and dives again, but this time near vertically. The open ground beneath the target drone acts as a sound mirror providing acoustics that are perfect for a fix. The dart-predator falls like a diving hawk on its four-rotor prey, one wing smashing a shroud to bring them both tumbling to the ground. The second acoustic dart is aloft for another two minutes, diving and climbing as it searches for targets. It finds nothing before, as its boosters expended, it also smashes into the earth, the impact causing a chemical capsule to destroy its electronics.

On the big situation screen at home control, multiple enemy transmission indicators are pulsing intensely, but the screen line of acoustic sensors is not indicating activity. The two red flashing dots indicating vehicle movement are continuing to head in the direction of the Robotic force, but slowly. The commander speaks. “Okay everybody listen up, I think they are still curious, not alarmed. Their drones will be set to self-home if comms are lost, so there are probably a couple of minutes before they worry. Let’s see if we can distract the patrol heading towards us. Mick, take the Toyota towards them until you’re sure they’ve seen it, then take off left or right. Everybody else go to plan positions on my nod”

The pseudo-Toyota UGV bounces back up onto the track. It switches its headlights on and accelerates in the direction of the approaching Echthros vehicles. Moving fast its lights illuminate the tree trunks and foliage that form a green canyon-like track through the jungle. There are occasional cultivated patches and small settlements along the way. As the bouncing lightweight vehicle reaches a point where the jungle thins into open fields, its swinging headlights pick out two Echthros APC’s halted just beyond a track junction. The UGV continues at speed until it is about 75 m from them. It stops suddenly. The headlights brightly illuminate the Marine vehicles. Their commanders can be seen gesticulating and yelling angrily. Several of their soldiers dismount. There is a pause. One of the Marine commanders shouts again at the Toyota, then at the Marine in their vehicle’s turret. Three rounds are fired over the top of the scruffy white SUV. To the surprise of the Echthros Marines the Toyota accelerates towards them. Shocked, none of them react before the fake vehicle has reached the track junction just in front of them. It turns sharply to head down the side track, switching off its lights and accelerating as it does. It roars off. The burst of wild firing that follows into the darkness achieves nothing. It is another thirty seconds before the dismounted Marines are back on board and vehicles set off in a pursuit that will prove fruitless.

“Nicely done Mick”. Those in the control room immediately realise that the Marines think they are chasing an apparent curfew breaker. This is reassuring. It gives every indication that the enemy are not yet aware of a threat. The commander announces, “Mick has bought us a little bit more time, put the drones back up and execute the option to auto-deploy in smoke via the track.” The drone pilots lift their small machines back up from the canopy and nearly a dozen operators across the room input a similar, singular command. The command adds: “Anita, once the screen is in position put an off-route mine by the Heathcote crossroads”

The two Polywheelers beside the track, their siblings and Xtraks further behind and the other UGV waiting in the forest close to the beach receive the code. For all, it prompts the activation of one of a menu of pre-programmed routes. They begin to move out rapidly, with alternate vehicles blowing smoke to either side. Their low-power spectrum agile communications system conduct a silent 20

electronic conversation that enables them to avoid colliding, and for leading vehicles to confirm the route is clear to those behind. When the small convoy reaches a clearing, it slows and splits up. The two lead Polywheelers continue in the darkness to a point just short of where the Echthros Marine vehicles reached. Several Xtracks follow them with the remainder dispersing to either side of the track or to follow the two other pairs of the Polywheelers that now deploy left and right through the thinner vegetation. The vehicles on the left push out through the grasses and shrubs to position themselves along the forest edge. Concurrently, the group on the right do the same, but as the last two pass a small building a door opens. A silhouette of a woman can be seen staring out into the night at the mysterious smoke and noises.

An operator in the control room calls: “I have a civvie in building Stanwell 8 reacting – shall I go with bear-scarers?”. His section commander retorts; “No bangs yet, go with the speakers – and use the Echthros accent option”. This prompts the operator to select screen options that trigger his UGV to emit a sequence of recordings warning listeners in a heavily accented version of the local language to stay indoors to keep safe. “Drop a DD as well”, adds the section commander. The operator touches the screen again, and his machine drops a ‘detector-deterrer’ -a small motion sensing pyrotechnic device. If a civilian decides to follow the machine’s path into the smoke cloud a shrieking display will be initiated to discourage further investigation.

Soon the UGVs have finish jockeying around, The Polywheelers finding positions where the forest thins and they have a good view out across the clearings and occasional buildings towards the town. Now that observing sensors are in position, more systems can be deployed. Back at the beach a hatch opens on one of the cargo Xtraks and an UAV rises from it. Humming intensely and rising to a height of two metres it makes its way to the track previous vehicles have followed into the jungle. Several minutes later, along the track, it settles on the ground next to the crossroads from which the Echthros Marine AFV left in chase. From the centre of the UAV’s body, between the four rotors, a flat cylinder rises and turns to point its self-forging fragment warhead across the track. As that clicks into position a dozen small capsules squirt brown and green foam. To a casual glance it is now something rotting that has fallen from a passing truck.

In less than an hour from the first submersible crawling ashore, there is a screening force of ground and air drones deployed which can observe all approaches back towards where they landed. In front of them is a line of seismic and acoustic sensors, and at certain key points visual and thermal sensors stare out from rooftops towards the adversary. CUAS-MAVOC with remote weapon systems optimised to protect against Echthros drones and precision munitions are positioned at both ends of the beach landing site, and open clearings further inland and just behind the leading UGV. MAVOC fire support platforms wait dispersed in the forest.

The second wave of heavier UGV’s can now move ashore.

Thanks to Electro Optic Systems for helping create this content.