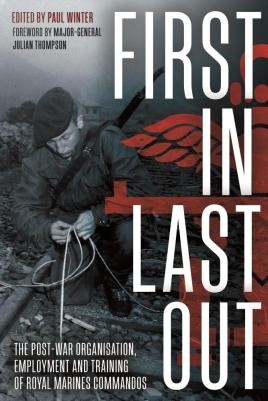 Doctrine is dull.  There’s no getting away from it.  Which goes a long way to explaining why, unless you are the greatest of nerds (like myself), Rommel complained that the British seldom read it.  Fortunately, as Rommel also observed, from time to time some doctrine comes along that is both eminently readable and, more importantly, practical.

First In Last Out presents one such doctrine pamphlet, hitherto unpublished and largely unknown: Amphibious Warfare handbook No. 10a.  Written in 1951 under the direction of Chief of Amphibious Warfare (CAW) Maj-Gen Vivian Thomas RM and Commandant General Royal Marines (CGRM) Gen Sir Leslie Hollis, the handbook was a product very much of its time and a response to an all too familiar set of circumstances.  Changes to the strategic environment, defence cuts and organisational reform, and a lack of clarity as to what the RM exist for, not least within their own ranks, are a common refrain in the Corps’ history.  The handbook sought to establish doctrinally answers to each of these questions in structuring, equipping, and orientating the RM to their new, Commando, role.1

So why publish now?  Two reasons.  First, as a piece of unique historical interest.  Amphibious Warfare offers students of military history insight into the context and practice of the Conceptual Component of Fighting Power.  Secondly, its relevance to the wicked problems facing today’s Corps as 3 Commando Brigade (3CdoX) transitions towards a new era and the Future Commando Force (FCF).

Of prime concern to the modern audience is the introduction by the editor, Dr Paul Winter.  No stranger to the Royal Navy and Royal Marines, Dr Winter lays out the reasons behind the doctrine, its historical context, and its modern relevance in a wide-ranging essay.  More importantly, he highlights several areas of dissonance in current Corps thinking and areas where, in an ever-present search for relevance, the Royal Marines have surrendered unique strategic capabilities in a race to hone a tactical edge.  Much of what he says will be familiar to RM readers but may come as a surprise to the uninitiated.  I found myself nodding my head to much of his good sense.  His fundamental argument – that the RM need to separate themselves from the pack by carving a distinct defence niche and identity with a bespoke doctrine – is convincingly made.

The doctrine pamphlet itself is a prime example of what well-written doctrine should be.  A mere 145 pages long, it covers every base in the Fighting Power lexicon: Physical, Conceptual and Moral components are all included.  It opens with a strategic vision for the Commando force, based on timeless principles.  It then guides the reader through the technical, tactical and procedures (TTPs) for the training, selection and employment of commandos, ending with an exhaustive definition of what a Royal Marines Commando is (or should aspire to be).  Whilst many of the TTPs are of their time, the themes are as valid today as they were then, and the practitioner-focus speaks to the hard-fought experience of the writers.  It is also concise and written in plain English, eschewing the jargon and techno-babble that plague modern doctrine.

Modern writers of doctrine would do well to learn from this historical example.  I for one place First In Last Out on a similar level as the 1933 Truppenfuhrung, and it has a place on my bookshelf beside the first RM doctrine pamphlet (published in 1763!).  It traces a golden thread between the strategic and the technical and, like Truppenfuhrung, comprehensively entwines the moral component into the weave.  If only more doctrine was written in this vein!

More importantly, it should be required reading for every serving Royal Marine today.  Not only will it shine a light on the arguments surrounding the FCF, arguments that have raged since 1948, but it carries with it the ethos of the original commandos.  If the FCF is about returning to roots, then there can be no better place to start.

[1] It should be noted that, in 1948, of 13,000 RM only 2,200 were Commandos. The remaining 4/5ths were “Sea-Service” or “Blue” Marines. This included those assigned to Landing Craft and traditional Force Protection/Maritime Security duties.