On 9 February 2017, European Space Agency astronaut Thomas Pesquet, a member of the Expedition 50 crew, captured a winter landscape image from the International Space Station.  It was of the Dnipro River.  The photograph showed a great, coursing white snake that reminded Pesquet of a Japanese ‘Hokusai painting’.  The white was ice and it explains why Russian forces on the Dnipro right bank now face a ‘difficult situation’, as described by General Sergei Surovikin, the recently appointed operational commander of Russian forces in Ukraine.

In winter the Dnipro freezes over, usually after a 20-day spell of sub-zero temperatures. A frozen river would halt Russian ferry and pontoon operations.  Resupply would become impossible. The average freezing and thawing dates for Kherson are 3 January and 3 March. The ice regime is not consistent or predictable: in some years the Dnipro freezes for short intervals; in others it does not freeze at all. The freezing (ice) moves southwards. Additionally, as Ukrainian Major-General Serhiy Savchenko has explained, ‘when the coastal waters of the Dnipro are covered with ice, it will be impossible to use ferry crossings.’  His assessment is Russian forces will seek to withdraw by the end of November.  Is he right?

The significance of the Nova Kakhovka HPP

The ‘difficult situation’ facing the right bank Russian force has placed focuses on the Nova Kakhovka HPP (hydro-electric plant); specifically the threat of a deliberate demolition of the dam to impede Ukrainian advances.   The Nova Kakhovka HPP is located roughly 75 kilometres upstream of Kherson City and is the last of the six dams on the Dnipro.

Demolition charges were first placed at this facility in April.  More recently, charges have been placed on the locks and supports.  Two Kamaz trucks loaded with explosives are permanently parked at the dam. President Zelensky has warned blowing the dam would create an environmental catastrophe and flood as many as 80 settlements downstream. 18 million cubic metres of water would be released.  Tens of thousands of people would be at risk of flooding and losing their lives.  Russian reporting suggests 50,000 people would be caught.  Water provision via canal systems in southern Ukraine would be at risk (including water supply needed for cooling at the Russian-occupied Zaporizhzhia nuclear power plant). 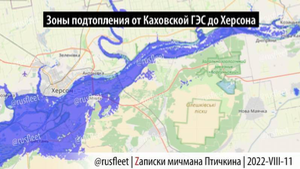 At the time of writing, blowing the Nova Kakhovka HPP would be a self-destructive act.  Russian forces on the left bank flood plain would be caught with the possibility of drownings. Right bank forces (an estimated 15,000) would be trapped.  Kherson City would be under water. Militarily, it only makes sense to blow the dam after all right bank forces have withdrawn and cleared the flood plain on the left bank.  Is this the plan?  Could Russian forces execute such a plan, in contact, successfully?

Russian and collaborator statements and actions are contradictory. Kirill Stremousov, the collaborator deputy head of the administration of the Kherson region has stated, ‘Today we are preparing the city of Kherson as a fortress for defence and are ready to defend to the last.’ Defences are indeed being strengthened and as many as 2,000 mobiks (mobilised reservists) have been sent to Kherson (deaths have already been reported).  At the same time, Russian forces have been observed using as many as five ferry and pontoon crossings to withdraw equipment to the left bank (the completed barge bridge alongside Antonovskiy Bridge was struck by HIMARS in 20 October and made unusable). Russian civilians and collaborators are being evacuated.  The Kakhovka Hospital which the Russians seized, evicting the civilian patients, is now being emptied. Looting is being reported. This is usually a sign of imminent Russian flight. An appearance is given the Russian command is preparing for a withdrawal but simultaneously stiffening the defence. Whatever the intentions, Surovikin will likely face difficult dilemmas.

In August 1941, Stalin ordered the NKVD to blow the Dnipro HPP.  Neither the civilian population nor army command was informed. There are no reliable numbers for how many people – civilian and Red Army – were killed.  A low figure of 20,000 is cited.  A high of 80 -120,000 is also quoted.  Blowing the dam did not stop the German advance. The secrecy was such the perpetrators were arrested by counter-intelligence as presumed saboteurs (mirroring internecine fights today between Russia’s security organisations).  Stalin dismissed one million deaths as a mere statistic.  Does Vladimir Putin feel the same way?