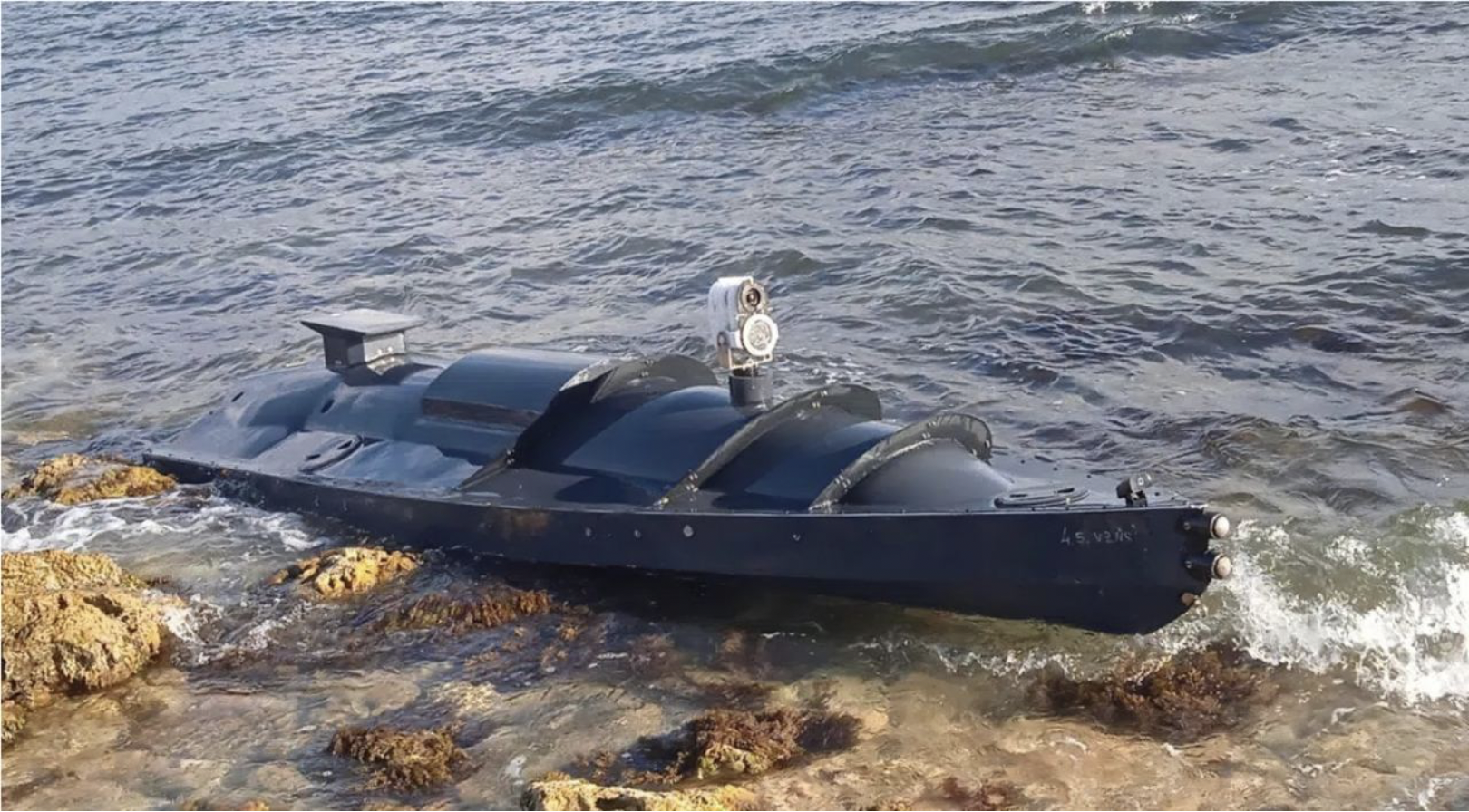 On Saturday 29 October, at 4.30 am Moscow time, air defences at the Black Sea Fleet base in Sevastopol Bay were alerted to what appeared to be a kamikaze drone attack.  Governor Mikhail Razvozhaev reported the situation was ‘under control’.  ‘All UAV were shot down’ and ‘a surface drone’ had been found and destroyed.  The only damage was a window blown out by an explosion at the Sevastopol Professional Art College at Khruleva.  However, video surveillance cameras were turned off in the city and Sevastopol Bay was closed, making the governor’s account suspect.

As dawn broke and the day unfolded, a different picture emerged.  The Russian Ministry of Defence (MoD) reported Ukraine had used seven maritime kamikaze drones and nine aerial kamikaze drones in the attack.  All the aerial drones were shot down.  Four maritime drones were discovered and destroyed on the outer roadstead.  Three had penetrated to the inner roadstead and were also destroyed.  Damage to the Soviet-era Project 662M minesweeper Ivan Golubets was also reported.

A triumph of the entrepreneurial spirit

However, imagery posts on social media suggested more damage had been done.  With high confidence, reporting suggested the Project 11356R frigate Admiral Makarov – now the Black Sea Fleet flagship following the sinking of Moskva in March – had also been struck in the bows.  Strikingly, the frigate undertook no actions to defend itself although its Fregat M2M air and surface detection radar was rotating (which does not imply a small target like a kamikaze drone would have been detected; the navigation radar would have been more suitable for an object this size).  Less reliably, superficial damage was reported to a large amphibious assault ship, several auxiliary vessels, and a transport or cargo vessel.  A tower of black smoke suggested some sort of oil storage area had been struck.  Interlocutors of journalists at the Headquarters of the Black Sea Fleet reported four to seven dead and 15 to 20 wounded.  These were mostly shift workers rather than naval personnel.

Where did the maritime kamikaze drones come from?  In April, the US Department of Defence (DoD) sent an unspecified number of ‘unmanned coastal defence vessels’ to Ukraine.  The type was also not identified.  The US is the world leader in the design, trialling and fielding of Unmanned Surface Vessels (USVs).  A 2013 RAND study 1 testifies first to the dynamism of American entrepreneurship.  America leads because of bottom-up push, not top-down command.  Britain, incidentally, is not badly placed and comes second after the US.  Nothing could be further from the sclerotic Russian (Soviet) system of design bureaus, state-run institutes and the state defence order.

On 21 September the Russians discovered such a washed-up, canoe-shaped USV on a beach near Sevastopol.  It was roughly eight metres long; fitted with what appeared to be contact detonators on the bow front edge; and had an elevated, square flat panel on the stern.  The latter, it was speculated, was a Star Link receiving terminal and would explain how the USV was being controlled.  Earlier this year, Elon Musk’s Star Link received regulatory authority to start rolling out an antenna for use on moving vehicles.  According to SpaceX, ‘ The flat panel antenna also has advanced GPS navigation capabilities to provide stable communications on the go, is ‘robust in harsh environments’ and is designed to be permanently mounted on a vehicle.’  ‘Vehicle’ includes ‘boats’.

So in the week US billionaire Elon Musk was courting headlines over the acquisition of Twitter, it appears his Starlink technology was playing a key role in the raid on the Black Sea Fleet in Sevastopol Bay.  This was not incidental.  It is the reason why Russia’s trajectory is descendant and its chances of winning a war are slight.  The daring raid was many things, including an historic first, double kamikaze drone attack (air and sea).  But it was also a triumph of the spirit of enterprise that makes the United States such an engine of innovation, risk-taking and leading technologies.

To rub salt into wounds, a USAF  Northrop Grumman RQ-4B Global Hawk call sign Forte-10 was 17 kilometres off the coast when the events unfolded and probably filmed it all.