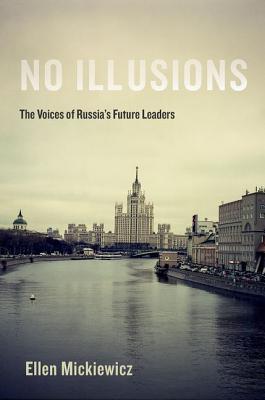 ‘No Illusions’ offers a unique insight into the minds of the young elite currently passing through some of the most prestigious universities in Russia.  Mickiewicz takes the reader on a journey of discovery into the various interests, influences and motivations of the future leaders of Russia and explores how this may shape and impact global politics in the future.

Ellen Mickiewicz is a professor of political science at Duke University and a respected expert on Russian media, politics and culture.  The book is based on thousands of hours of conversations gathered from focus groups, comprising over 100 students from three of Russia’s top academic establishments.  In a new introduction to the paperback version, Mickiewicz brings the book right up to date, exploring Russia’s suspected meddling in the recent US elections and the concept of ‘Weaponised Information’.  Drawing on wider research than the rest of the book she counters the view of President Putin’s popularity and ability to influence his own people through information.  Despite being written some years after the initial release this introduction perfectly sets the scene for the topics discussed later in the book, leaving the reader keen to explore the inner work of Russian culture and opinion in more detail.

In the original introduction Mickiewicz takes time to explain in detail the methodology behind this research, critically explaining the benefit of this rather specific group, over a more general view that could be drawn from a sample of the wider population.  Drawing on her decades of experience in Russian politics and culture she charts the future rise to the very highest echelons of Russian politics, business and academia that these young Russians will take.  This description adds authority to their voices allowing the reader to believe that they are reading the words of Russia’s future leaders.

Through the main chapters of the book, Mickiewicz takes the reader through the most topical subjects in relation to today’s social and geo-political issues facing Russia and the wider global community.  Views of the western world, specifically America, views on current Russian leaders, recent regional conflicts, trust, protest and political opposition are all explored.  While each chapter covers a specific topic, Mickiewicz skilfully weaves in previous discussed ideas to re-enforce her arguments, while also signposting linkages to areas that will be covered later in the book.  The Internet and the relationship the young Russian men and women from the focus groups have with it, is a constant theme throughout the book.  There are two concepts that resonate as particularly relevant.  The participants in the study are acutely aware that they live in a world of constant miss-information or ‘fake news’ both from their own Government and from outside Russia.  Mickiewicz highlights their thirst for information and truth through dedicated research across the Internet, concluding that the power the Internet gives them is choice; in what to believe and where to draw their information from.  The second concept that stuck out is recognition that in the cyber domain, for these Russian elites, there is a shift away from the traditional socio-political hierarchical structures.  Status in the ‘real’ world, either political or otherwise is of little importance to the focus groups.  They embrace the freedom the Internet offers to allow everyone to be equal and as a result take each opinion offered or information as an opportunity to form their own thinking and judgment.

In summary Mickiewicz provides a window into the minds of what she describes as the future leaders of Russia.  It is packed with fascinating first hand opinions linked together with insightful conclusions and analysis that only someone who has spent a life time studying Russia could provide.  If you have any interest in Russia and how 21stcentury access to information is impacting on future decision makers then this book is worth reading.  However this comes with a health warning.  The anecdotal first hand nature of the book, which provides its credibility, also makes it at times over whelming and confusing.  It requires time to read, and to get the most out of the book, the reader will likely have to review each chapter.

The Alliance vs The Bear – Some Fundamentals of Why Russia Won’t Win. (Part 1)