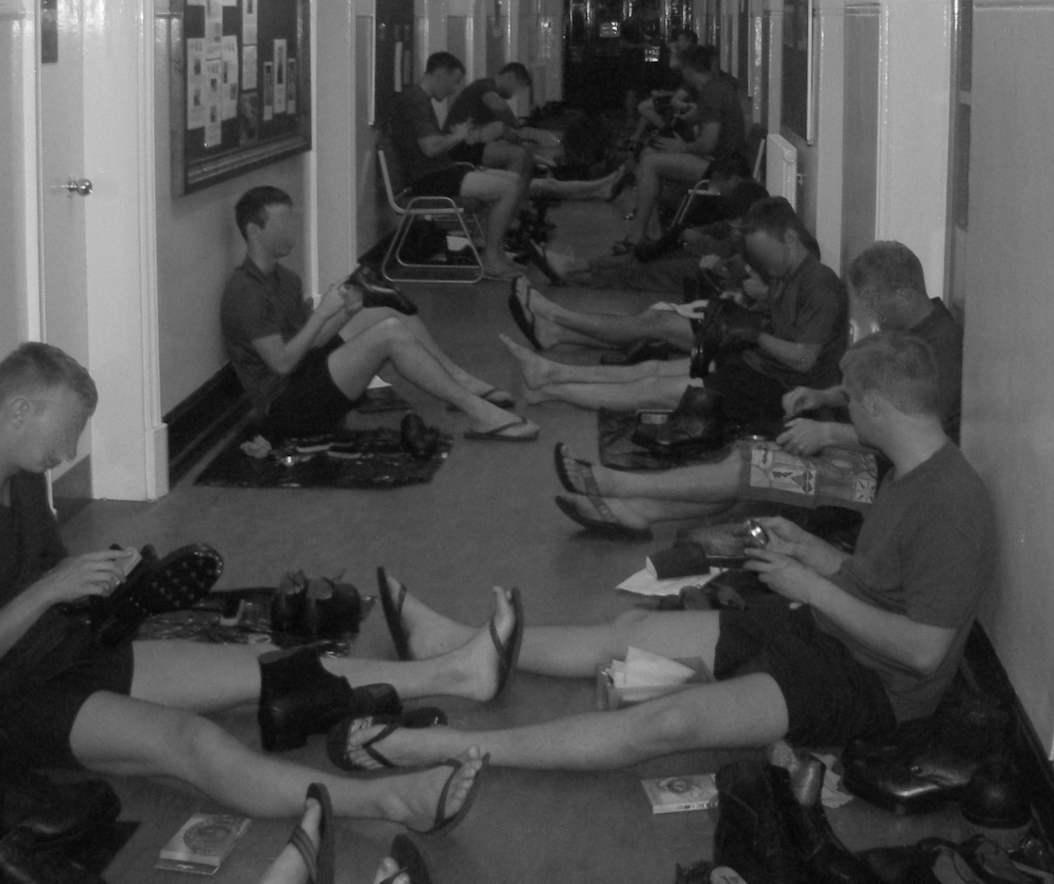 When one officer cadet was asked why he perceived training at Sandhurst like a continuation of his school education, he stated that ‘traditionally, the whole point of a public school was that it would serve boys into public service’ hence, ‘the government or the army were two leading grounds’. Most cadets explained that it was ‘a natural progression’ and a traditional career path, particularly for those cadets who went to so called elite boarding schools,1 which often place emphasis on preferable qualities, such as confidence or assertiveness, to successfully pass the entrance test at the Regular Commissions Board (RCB) to get into Sandhurst.2

“I’m definitely a manifestation of that sort of hard new frontier boarding school. It was quite archaic in many senses. But it produced very competent, assertive and athletic guys and so that’s naturally transpired and leading towards going to what I term as the most turbo boarding school of them all, which is Sandhurst.”

“I think the customs of this place mirror boarding school, completely. Sandhurst is like a boarding school with rifles – you have dorms, you share, you go to mess, you eat in hall and there are big, fancy dinners and that kind of thing. [Since I went to a boarding school,] I felt very kind of home with that stuff.”

Von Zugbach, who extensively researched the background of Sandhurst cadets in the 1980s and 1990s, tried to find out if the selection procedures of the selection board were in favour of cadets from the upper classes.3  Although Paul Michael Dobson found evidence for adverse impact against state school educated recruits at the RCB,4 overall, von Zugbach’s assumption proved to be incorrect. The results of my study rather pointed towards the fact that cadets who were schooled at educational establishments that fostered values such as authoritarianism and physical achievement could use their pre-socialisation as an advantage regarding entry into the officer corps, because they were more likely to fit the commissioning board’s idea of a candidate suited for Sandhurst.5

Another study found that sons of servicemen are also more likely to meet the requirements of the officer selection board, since they generally have a genuine interest in, and good knowledge of, military life.6  However, although officers were expected to have certain characteristics, Christopher Allender stated that measures of personality are not undertaken by the British Army at any stage of selection and training processes.7 On the contrary, scholarly research suggested that the selection process was self-perpetuating in that the Army would only recruit in a resembling image of itself and reject those cadets who do not fit in the image of the traditional army officer.8 There is an entire chapter in the book dedicated to the discussion of class differences, unwritten rules in certain regiments and the cadets’ perceptions about social snobbery and selection procedures at Sandhurst.

Cadets who went to boarding schools pointed out that they did not only get ‘engrossed into a military atmosphere’ during school, but also knew that becoming an officer was not only ‘a very traditional career’, but also something that ‘you get channelled towards.’ Inge Bates and George Riseborough (1993)9 analysed deep-seated inequalities in the British labour market which are influenced by social class and explain certain career routes.10 Picking up on their research, once on a chosen route, the officer cadets were arguably socialised in a rather narrow set in terms of goals and ambitions11 considering that most interviewed cadets referred to the officer career as a traditional career in regards to their background. A lot of those cadets also stated that as much as university seemed like a natural progression after school, Sandhurst seemed like a natural progression after university – ‘like a couple of years of school taped on at the end.’

Interestingly, experiencing Sandhurst as a finishing school was not only mentioned by officer cadets who went through private schools, but also by cadets who were in the Territorial Army or attended cadet classes during school or university. Many of those cadets referred to Sandhurst as the final stage of their previous military training. In June 2017 there were 190 CCFs at independent schools and 189 at state schools.12 Arguably, as a consequence of this development, the number of cadets from state schools will most likely increase and contribute to a change in the current balance of private and state schooled cadets at Sandhurst.

This is a 1 of 6 short extracts from a large-scale study1for which Sarah conducted more than a hundred interviews and surveyed almost 900 British and German Army Officer Cadets between 2014– 2015. All research results can be found in her book “Identity, Motivation and Memory: The Role of History in the British and German forces” which has just been published by Routledge.