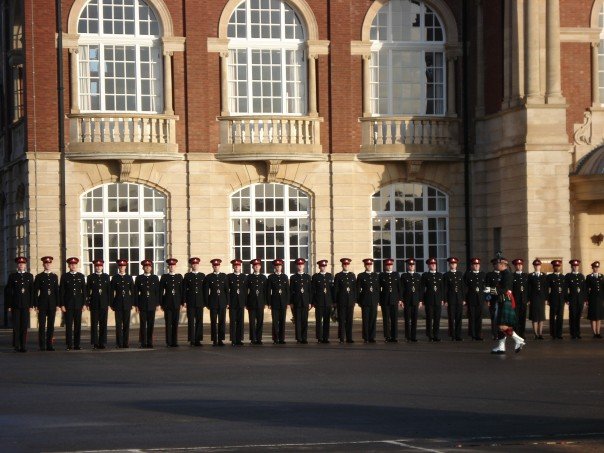 The Role of History in the British Army Officer Corps.  The traditional line of the different regiments in the British Army accounted for one of the most influential factors for enlistment. Most British cadets at the Royal Military Academy Sandhurst repeatedly stressed that being an officer would go hand in hand with a ‘peerless tradition’, because they would automatically ‘become part of an ancestry that is moulded by British history,‘ regardless of the regiment that they were going to join. One cadet explained that service would not only inspire ‘feelings of pride and a sense of duty‘, but also make ‘regimental heritage and prestige a key recruiting pull‘ because many cadets felt that the regiments would give context to their role in the army.

Cadets who brought the regimental traditions in line with their decision to enlist regularly claimed that without the historical legacy of the specific regiment that they had chosen to commission into, they would have been less inclined to enlist.

Many of the cadets stressed that separating the British Army from Britain’s visual appearance was impossible, since ‘the Redcoat has been a longstanding image of the British Isles‘ and, allegedly, the British people have ‘always been a warlike people‘. The cadets also highlighted that being an officer was ‘one of the few remaining traditional aspects of British history‘, and even if they did not plan to remain officers for life, they would appreciate the chance to temporarily enter one of the most traditional professions in Britain.Some cadets explained that in their view, traditions were particularly popular, because they fostered a sense of community:

“I suppose you have to live it, to realise how much tradition comforts you. (…) because in England it’s all about tradition and culture and religion. So in the Army and in England in general, with the Anglican Church – it’s cultural Christianity. You don’t necessarily believe in god, but you can still sing hymns in church, because it’s your culture. It’s not about god, it’s about the culture. That is kind of evident in the Army (…) I guarantee you, most people don’t believe in god. But when you sing a patriotic song like “Jerusalem” or “God Save the Queen” and you are standing to attention, it’s a unifying thing.”

The historian Arnulf Baring argued that although traditions ensure a certain degree of stability in Britain, they could also hinder progress1.  Some cadets held a similar view, and stressed that, although traditions were nice, they would handicap the flexibility, efficiency and innovation of the British Army in the twenty-first century. Interestingly, although many of the aspiring British officers stressed that they were fond of traditions they also emphasized that those traditions should not evoke limitations in regards to the development of the British Army into a modern, adaptable and sustainable Force in the future2.

“I love the traditions and the place [Sandhurst],but here is quite a controversial point: I don’t really care about the tradition in a way, because if tradition stops you from making necessary changes to be better in your job in the future, than tradition is a bad thing”

Eighty-five percent of the Sandhurst cadets affirmed that having the opportunity to pass the traditional officer training at Sandhurst was important or even very important to their decision to enlist. Furthermore, many of them stressed that if Sandhurst had not been a traditional place with traditional customs, they might not have enlisted.

“Sandhurst is an odd place, because it’s not like the rest of the British Army. Sandhurst is antiquated. It’s very much stuck in how it does things. (…) I mean, even if some people hate parading around on the square, you know that when you do the Sovereigns Parade (…) you’ll feel very proud of this tradition and wouldn’t want it any other way. So these rigid things that seem antiquated, actually just foster the course (…) If you would strip all the tradition away, what would the Army be? Just a lot of blokes in a building. (…) If this was a clear brick building and there would not be any parades – I would not have come.”

In both the surveys and interviews, a large number of the aspiring officers indicated that the good reputation of the British Army has heavily influenced their decision to enlist. In the perception of most Sandhurst cadets this reputation was directly linked to a strong historical fundament that generated a perception of the army as a fighting force that takes great pride in its past. The cadets also repeatedly referred to the good reputation of the British Army in the British public by stressing that being an officer was perceived as a ‘well respected career path‘ because of the ‘esteem that was associated with the military’.Asking British officer cadets about the state of civil-military relations in Britain more than two thirds (72%) answered that they felt that British soldiers were held in high esteem in British society.

This is a short extract from a large-scale study for which Sarah conducted more than a hundred interviews and surveyed almost 900 British and German Army Officer Cadets between 2014– 2015. All research results can be found in her book “Identity, Motivation and Memory: The Role of History in the British and German forces” which has just been published by Routledge. This series is meant to give you a glimpse of what to expect in the book.