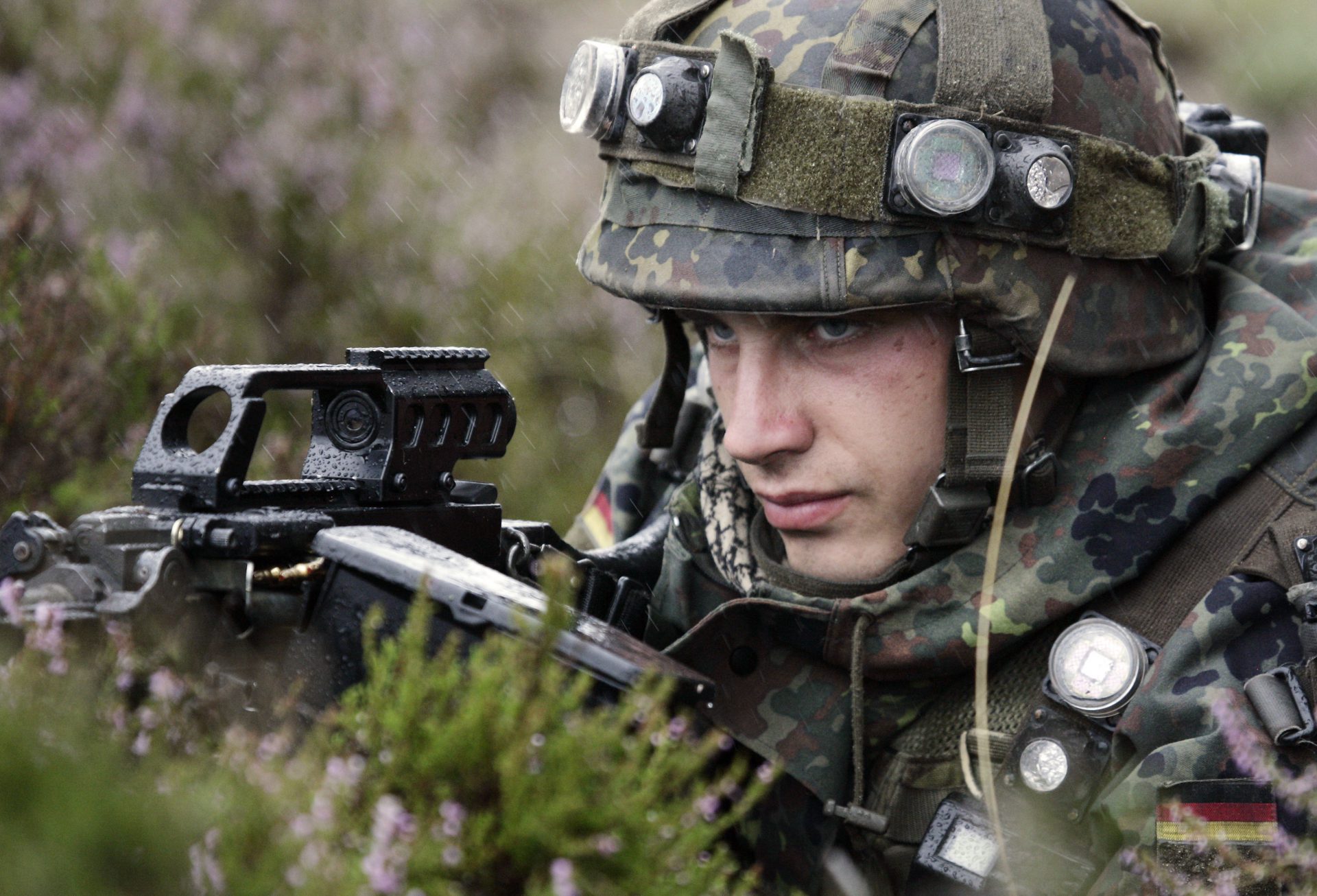 Differences between Officer training in Britain and Germany.  Once selected by the Army Officer Selection Board, British cadets are trained on a Commissioning Course at the Royal Military Academy Sandhurst in Surrey.  In Germany there are two officer courses depending on whether or not officer cadets decide to complete the training with or without a degree course. The vast majority of German applicants in 2014 (in contrast to the British cadets) did not hold a university degree previously to the start of their officer course and about 80 percent of them proceeded with a degree course at one of the universities of the Bundeswehr in Munich or Hamburg.

German cadets receive basic military training for 6 months to acquire military skills and leadership training before completing the first of three officer courses at the Officer School in Dresden (OSH). Following the first officer training course, which lasts for 3 months and focuses on basic knowledge of military history and law, as well as political education and tactics, the cadets complete an English language course for 10 weeks followed by practical training in the arm that they are going to serve. Notably, German cadets join arms and not regiments and in contrast to the majority of the Sandhurst cadets (only 29 of 515 cadets in 2014 were confirmed cadets at Sandhurst), German cadets know from the beginning in which arm they are going to serve and their troop experience training already takes place in their arm of choice.

Following 15 months of basic training, the cadets enter a degree course in a subject they have either been assigned to or chose themselves, depending on the availability of places in different subjects. The universities of the Bundeswehr operate in a similar way to civilian universities with civilian staff1.  Notably, military science or War Studies are not taught at the Bundeswehr universities 2.  All cadets, regardless of the branch that they belong to, are educated at the military universities: this procedure is undertaken in order to evoke interpersonal solidarity amongst cadets from the army, air force and navy to increase the chances of a better performance in cooperative action later on 3.

The universities of the Bundeswehr allow the cadets to complete their Bachelor’s and Master’s degrees within four years whilst being fully paid in their respective rank. After completing their MA, the officer cadets complete two more courses at the OSH. In contrast to the first officer course, those courses have a stronger focus on practical and regiment specific training as well as the development of leadership qualities 4.  Therefore German cadets spent more than 6 years in training before they are fully qualified and ready to be deployed.

Much like the training in Britain, the military training of the German cadets is conducted by senior non-commissioned and warrant officers. However, in contrast to Sandhurst, the academic personnel at the OSH have a military background and the regimental specific training is in most parts performed by higher ranks such as Captains and Majors 5.

The majority of the German cadets, in contrast to most Sandhurst cadets, joined the army straight after school. Subtracting the degree course in the German system would give a German cadet the option to get promoted to Captain after 4 years, like British cadets, with the only difference being that most German cadets will also hold a Master degree at the time of their promotion.

The most striking difference between the two systems is the inclusion of a degree course within the German officer training. Whereas British cadets can leave the army after a total of 4 years, which includes their officer and regimental specific training, their German counterparts commit to a minimum of 13 years. The short commission in Britain is a result of reforms in the British Army to make a career in the military more appealing for those cadets who do not know if they want to stay in the military for life. As a consequence, the aspiring British officers have the option of leaving the army when on average they are in their mid-twenties, while the vast majority of the German cadets will be in their early thirties before they have the opportunity to leave the Bundeswehr. As a logical consequence, the aspiring British and German officers have different approaches towards their occupational future planning and their job role in the Army.

This is a short extract from a large-scale study for which Sarah conducted more than a hundred interviews and surveyed almost 900 British and German Army Officer Cadets between 2014– 2015. All research results can be found in her book “Identity, Motivation and Memory: The Role of History in the British and German forces” which has just been published by Routledge. This series is meant to give you a glimpse of what to expect in the book.