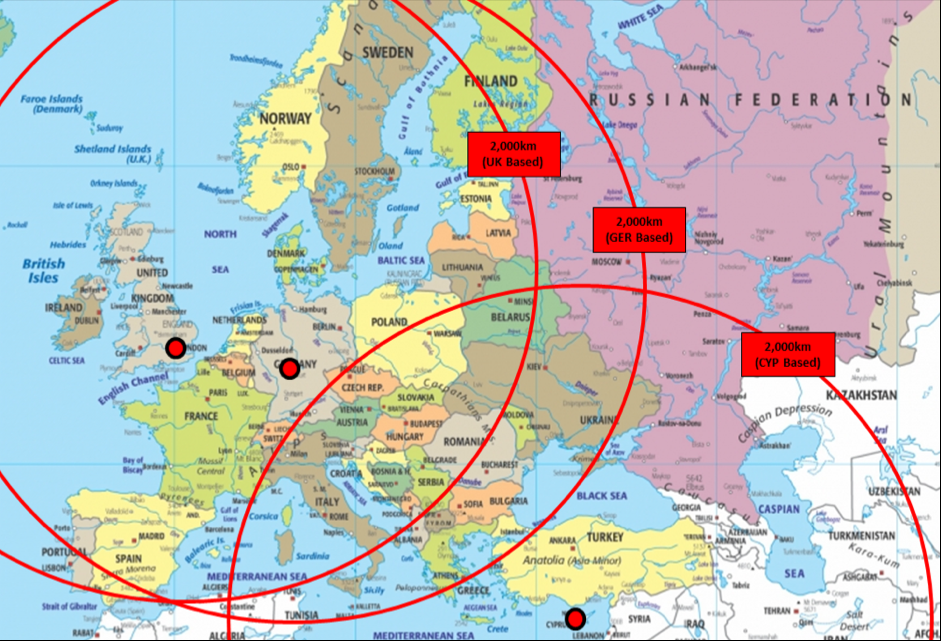 As technology rapidly evolves, large-scale armoured warfare between peer enemies appears increasingly anachronistic and improbable 1.  In particular, developments in conventional Long-Range Precision Strike systems have undoubtedly altered the character of peer-on-peer warfare.  In Russia and China, new ballistic, cruise and hypersonic missiles have emerged successfully from their research and development programmes and are being operationally fielded in large numbers.  Across the land, air and maritime domains, these new anti-access/area denial (A2AD02 complexes are threatening to render NATO’s traditional approach of graduated force deployment obsolete, as NATO platforms face the prospect of destruction at the point of theatre entry, well before they reach the close battle.  Indeed, given these developments in Long-Range Precision Strike capability, NATO’s superiority in the armoured close battle is facing irrelevance3.

A British Long-Range Precision Strike missile array would form a strategic conventional umbrella over continental Europe.  It would be the United Kingdom’s most significant contribution to European security below the nuclear threshold.  It stands to reason that this would buy tangible influence for the United Kingdom in a post-BREXIT environment, both within the European Union as a collective body and across individual member states, the majority of whom are also NATO members.  Moreover, the positive influence effect would manifest at the point of policy announcement, well before the point of operational roll-out.

To enhance survivability, a credible Long-Range Precision Strike capability would require cross-domain launch options (air, land and sea), using both cruise and ballistic missiles as delivery vehicles. While British air and naval forces already employ Storm Shadow and Tomahawk cruise missiles respectively, these capabilities are currently too few in number to form the basis of a strategic conventional deterrent.  On land, while the United Kingdom is not a signatory to the INF Treaty, a US withdrawal from the Treaty would politically free the UK to develop ground-launched missile systems, in potentially large numbers.  Providing host nation political agreement is obtained, some ground-launched systems could be forward-positioned as part of the enduring British footprint in Germany to extend their range, as well as within the Sovereign Base Area of Cyprus in order to hold Middle Eastern adversaries at risk (note, Iran has also developed a Long-Range Precision Strike capability covering a significant percentage of continental Europe6).  In parallel, the United Kingdom should progress with its development of hypersonic missile variants, in order to remain technologically in-step with NATO’s primary adversaries.

A graduated array of missile ranges would need to be developed, allowing policy options at both the strategic and operational levels. Strategically, missile ranges of at least 2,000km should be developed, while systems should also maintain operational-level utility through their ability to strike focused military targets at shorter ranges during active hostilities.  Various missile ranges are proposed at the end of this article (Appendix 2).  To avoid single-service parochialisms, the full suite of British Long-Range Precision Strike capabilities could be commanded by the newly re-branded British Strategic Command (STRATCOM) when employed in their deterrent role at steady-state, and then made available to CJO, or NATO commanders, for operational use during active hostilities.

A British Long-Range Precision Strike capability must be affordable.  In this regard, cost-effectiveness is the principal benefit of ground-launched systems compared to their air and sea-launched equivalents.  In the latter two domains, new missile systems would probably require the development or procurement of new capital platforms.  At the very least, existing air and naval platforms would require significant modification.  By comparison, a ground-launched, Long-Range Precision Strike capability, using a suite of mobile erector-launcher systems, would be less capital-intensive, as these ground-based delivery platforms would be smaller and relatively cheaper.  To reinforce the point, the cost-effective nature of ground-launched missile systems is one the primary reasons why these capabilities are starting to strategically proliferate amongst NATO’s adversaries.

As a financially compensating measure, it stands to reason that other British land force capabilities could be rationalised.  Instead of pursuing the current trajectory of organising and equipping a Division to be held at readiness for improbablelarge-scale armoured combat, the Army could re-focus on generating elite Brigade-sized intervention capabilities for employment across the spectrum of air assault, commando amphibious and light role functions, with some residual, smaller-scale armoured capability.  Such rapidly-deployable, elite intervention capabilities, protected by the umbrella of a Long-Range Precision Strike missile array, would represent a more potent capability than a heavier, more unwieldy and strategically-unprotected armoured force, and would certainly offer policy-makers a much more impressive notice-to-effect7.

This Appendix provides a basic inventory of Russia’s conventionalLong-Range Precision Strike capability.  Single-usenuclear–armedmissiles, including Russia’s Intercontinental Ballistic Missiles (ICBM), are not included below, although dual-use variants are. All ranges are broad estimates.  Hypersonic variants are highlighted in italics.

This Appendix graphically illustrates the proposed ranges for British ground-launchedLong-Range Precision Strike missile systems.  Due to the flexible positioning of sea-and air-baseddelivery platforms, missiles launched from the sea or the air would have much greater overall range.

The ranges depicted below represent 2,000km from the United Kingdom, Germany and Cyprus respectively.